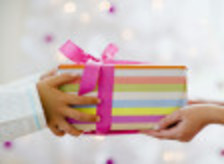 My good friend Sandy Halperin, who has early onset Alzheimer's was recently honored along with Sanjay Gupta, M.D. with the 2016 Proxmire Award, which recognizes national figures who have "demonstrated leadership and positively impacted public awareness around Alzheimer's disease and dementia."

A couple weeks before he accepted the award we had a 35 minute Skype call. In it he expressed concern about what he was going to say. Certainly honored by the award, he knew he needed to be both gracious but also make a statement, while he still could, about how much more was needed to be done in the battle against the disease.

Sandy lives in what he calls "The Precious Present." It's a book and a way of life for many with dementia, including Alzheimer's. But it could be a way of life for all of us if we grasp the nugget of what this tiny book is about.

Here is a quote:

The present is simply who I am, just the way I am...right now. And it is precious.

When Sandy and I were conversing on Skype, he said that once the call was over, he would likely forget who he talked to and what we talked about but he would know something special happened. Every time I speak to him it is special. Because he is fully present and he makes me fully present. He knew when he addressed the attendees at the Leading Age presention, he would have that moment and that moment only to make an impact.

Think about how much fuller our lives could be if we were fully present.

In a recent New York Times article entitled "Fraying at the Edges reporter N.R. Kleinfield followed Geri Taylor, a woman battling Alzheimer's with as he said "prudence, grace and hope."

A couple of quotes struck me:

If you continue to think of who you were right up until the time you got Alzheimer's, you will experience frustration, decline, failure, a lesser self. (she continues)...But if you let that go then you are still becoming something. And it's not necessarily a diminution of yourself. You must realize, it ain't over.

Now we're always living in the present. There's none of that where you postpone saying something because he's in a bad mood or something. Right now I can't remember to postpone something.

I recently watched a Shark Tank episode where the presenters had what amounted to a gag gift. It is called the No Phone. Yep, nothing more than a square block that you can clutch instead of your phone. Oh yeah there is a selfie version that comes with a mirror on the back! Of course the Sharks did not fund it. But they missed the point. Only slightly tongue and cheek, founders Ben Vangeveld and Ingmar Larsen are sending us a message. They invented the No Phone after going to a Manhattan bar and doing what they call socializing, that is, staring at their phones and looking up occasionally. They were convinced people are addicted to their phones to the detriment of our daily lives and living in the present. Watch their You Tube video to gain more perspective.

See what they are really saying is no one, let alone those with dementia, is living in the present. I certainly get caught up in it. Do you find yourself doing these things?

Of course you do.

See Sandy and Geri totally get it. All we have is the moment we live in and we don't even live in that moment. If we were fully present to each other, we would have deeper relationships. And we would come to understand and appreciate how those with dementia, including Alzheimer's live their life. See we write them off immediately when they still have so much to contribute. Each of us has so much to contribute if we just pay attention to the moment we are in now.

I recently ended a business relationship after nearly six years, mainly because of finger-pointing, false accusations and no one checking the facts, all out of my control. It happened mainly because people have forgotten how to communicate with one another on a deeper level and we have become a knee-jerk reaction society. Yeah I could have sour grapes and did for an hour but then I said very well it's time to move on. One door closes, another opens. Today is what I have and I am fully present and open to what is next. As I say on my web site, I am going to Rock It! It's all we got folks.

I'll leave you with one more quote from the book:

As long as I continue to stay in the present, I am happy forever, because forever is always the present.