Poverty is the parent of revolution and crime.
-- Aristotle

Just this past week, disturbing reports came in about the ongoing violence around the world, and the genocidal violence now taking place in the Central African Republic. As a guest of the State Department, I recently visited Cambodia and later traveled to Vietnam, and was reminded of the tragic history of genocide in the region. I learned about the history of the tax and economic policies of these two countries. In fact, more recently I learned about their new economic trends buoyed by innovative policies, and wrote about it here and here. This trip to Phnom Penh and Hanoi offered a glimpse of how important these tragic events are to world history and how we must never forget.

Dith Pran, a 32-year-old journalist/translator, disguised himself as a peasant taxi driver to wander the streets of Phnom Penh. Like many others, Pran was trying to avoid immediate execution after the Communist takeover of Cambodia on April 17, 1975. It was his courage as a photojournalist that exposed Cambodia's descent into a mass genocide from 1975-1979, resulting in the 1984 Academy Award-winning film The Killing Fields.

The seeds of this mass destruction began -- not with an aggressive oppression of a racial group like in Nazi Germany -- but with a seemingly harmless tax revolt in a small rural farming community in 1967. Samlaut rice farmers and local entrepreneurs, having been evicted from their properties for failing to pay hiked up-tax bills, fought government troops funded by their own tax dollars. These skirmishes -- which began just like our own country's tax resistance prior to the American Revolution -- triggered a series of rebellions throughout the country eventually leading to mass exterminations of over 2 million people during a 40-month period. 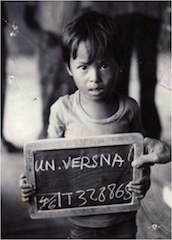 American professor of entrepreneurship, Emad Rahim as a child in the Cambodian
concentration camps.

The frustration of the country's rice farmers grew when the government closed the free market for rice. It then required them to sell their crops at artificially low prices. The regime also nationalized large tracts of farmland, without adequate compensation to the farmers, in order to build sugar plantations. This fueled even more resentment in the provinces. In addition, the government began appointing their own local officials to replace those who had traditionally been freely-elected by the villagers.

When the French guillotined the anti-colonialist Vietnamese revolutionary Comrade Nguyen Van Cu, his parting comments about his colonialist captors were "They try all means of oppression: taxes and forced purchase of government bonds." But what about these tax resistance-based revolutions was different from that which took place in the U.S? 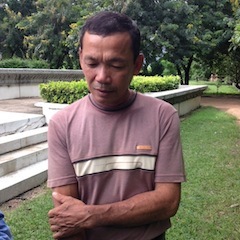 He discovered the killing tree where children were murdered.

The Killing Fields exposed the Khmer Rouge intentions to create a classless society through social engineering. The party forced urban dwellers, labeled "the new people," into agricultural communes to work alongside the rural farmers and peasants, labeled "the old people." Pol Pot, the party's leader, based this plan on a simple 10-point program outlined by Karl Marx and Friedrich Engels in their 1848 Communist Manifesto. (This was in turn based on The Manifesto of Equals written in 1796 which justified mass murder in the pursuit of universal equality.) So, unlike our Founding Fathers who wrote and rewrote their manifestos (later becoming the Constitution) based on Enlightenment ideas of republicanism -- the limited but vital role of the government in guaranteeing individual freedoms -- these movements were based on promotions of centralized government.

Over 32 years ago, while Cambodian farmers fought to save their lands and lives, my work as a New York City teacher brought me face to face with troubled and economically disadvantaged inner city youth. Knowing that half of all our products and jobs are created by small companies and seeing that entrepreneurial education was a way to teach math, reading and writing, I founded an organization that specialized in this area by developing curriculum, performing teacher training and providing alumni services. The Network For Teaching Entrepreneurship has been one of the most successful entrepreneurial education programs of all time. Thanks in part to that work, today young people around the world -- including Cambodians -- are embracing entrepreneurship again.

Luckily, the founders of our country enshrined political freedom in our laws. However, today many Americans find our own tax code is much too complex and unfair. As billionaire Warren Buffett noted, he pays less tax as a percentage of his income than his secretary. I think the simplification of our own tax code could help Americans to create more jobs and innovate in the market, just as our Founding Fathers hoped for when they penned the Constitution -- and particularly the Bill of Rights, where individuals are protected and innovation is encouraged. A simplified American tax system would help our entrepreneurs grow their businesses and provide jobs. Under "The Buffett Rule," Warren Buffett recommended of a minimum tax on all top wage earners. No household making more than $1 million per year should pay a smaller share of its income in taxes than a middle-class family pays. 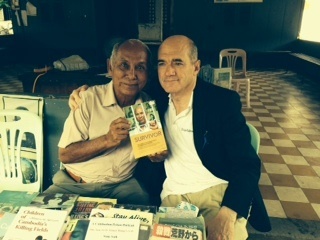 One of the few survivors of the Killing Fields, Chum Mey.

Like many revolts before it, the Cambodian holocaust was triggered by tensions between over-taxed small time farmers and government workers. Large landowners living in urban areas benefited from the forced transfer of wealth. Today, our own market and tax subsidies benefit one group at the expense of another. These inequalities reflect an economic system that places unnecessary financial burdens on small businesses and working people.

My Cambodian tour guide Kol Nou Thavrin cherishes his freedoms and will never take them for granted. But what about around the world? We must learn from the mistakes made in Cambodia to ensure that this never happens again.