On June 22, 1941, Adolf Hitler's Nazi army stormed through the Soviet Union in a surprise attack that should have been anything but a surprise.

The blitzkrieg started in the middle of the night and set into motion a chain of events that would result in millions of people dead. It was well coordinated, well planned, but not necessarily well thought out.

Marina Fedorevna looked at me with tears in her eyes and described those first days of war. The confusion and horror and fear were still very real to her, though decades had passed.

Marina and I met in Ukraine in April 2003. She shared her story with me slowly, taking her time to remember each detail.

"June 21st was our last day of school, and we had a party. I danced with a young man named Maxim. He was to begin attending the University in the fall, but I still had one more year of primary school before I could join him. Instead of going to University, however, he went to war. He died before the year ended.

"I still remember the sound of the bombs falling in the night. It was a terrible sound, and we didn't know what was happening. I was young, of course, and I knew nothing of politics. I knew there was a war in Europe, but I didn't know that the danger would come to us. I was surprised. Many of us were surprised."

When Marina got up on the morning of June 22, 1941, her entire life was changed. Her country was now at war, and she would lose two brothers and many friends to that war. She herself would take part in the fight through her local partisan group, battling against the Germans with tricks and underground operations.

"We were innocent on June 21st," Marina told me. "But on June 22nd, we were no longer children. I danced my last dance on the 21st of June."

This week marks 75 years since the Germans launched their blitzkrieg across the Soviet Union. In the course of those five years, an estimated 26,000,000 Soviets died, 6.8 million of them from Ukraine alone.

The Germans would ultimately lose the Soviet Union, underestimating the Red Army's resilience, the frigid temperatures they would face, and the power of the alliance struck between the USSR, the United States, and Great Britain.

In those days, the world had a common enemy, and that threat was enough to unite us against it. The Tripartite Pact brought Germany, Italy, and Japan together in a shared quest to establish a new world order, and the rest of the world was forced to respond.

This was a war of ideology, and the results were catastrophic.

I spent ten years studying and researching the effects of World War II on the former Soviet Union, with a particular focus on Soviet Ukraine. How did those events collide in such a way as to leave such a devastating mark? 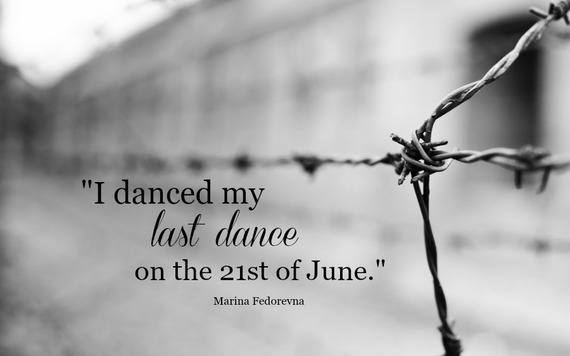 On Monday, June 27 the culmination of all those years of research, of the countless interviews I conducted with former Soviet World War II survivors, comes to fruition with the release of my novel, Like a River From Its Course.*

Based on true stories, Like a River From Its Course gives a glimpse into one of the most tragic periods in history through stories the world hasn't heard before. These are stories of heartache and grief, of love, pain, and redemption.

Hailed as "gritty and touching" by Publisher's Weekly, Like a River From Its Course is more than just a set of stories. It is history come to life, here to remind us of what it means to stand up in the face of evil and refuse to give in.

In an increasingly volatile world, it's important to look at the past and to learn from it.

If history has taught us anything, it's that the struggle for freedom is one that will never end. Though the enemy we face today is complex and different than that of the past, what is clear is that they want to bring the fight to our borders. This cannot be allowed. The events in Orlando are a wake up call, reminding us to be ever vigilant because we are not immune to attack.

The history of 75 years ago begs us to learn - to remember.

May we not dance on the memories of the past.