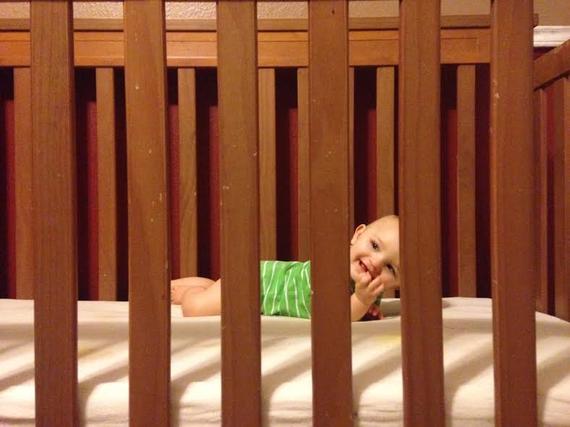 Whether or not you want to become a parent is relatively easy to decide. Those tiny little babies. So cute. So cuddly. So snuggly and soft and warm. Smelling of...

Well, everything nice, of course.

It's not just the emotional and physical expenditure that will change as your tiny little baby who only wants to eat and sleep and poop and stays put wherever you lay him. Your entire lifestyle will change. We weren't ready for this. I don't know if any parent is, because these are the things you don't think about when all you can see is baby.

I think about them now. Every time I get a utility bill in the mail or shop for groceries or just try to leave the house.

What you don't think about is that when your baby becomes a kid, there are

1. The much higher utility bills.

You won't notice this one right away. This will actually happen when your kid gets really good at turning on lights but can't quite figure out how to turn them off. Someday, when the baby is no longer a baby, he will also enjoy plugging up a toilet with toilet paper so he has to flush five times in a row and the toilet never fills up and it runs for half an hour before you notice. He'll forget to completely turn off the bathroom faucet after he's finally, finally, finally brushed his teeth after your thirtieth time reminding, and it will run all night, because you were just too worn out to stumble out of your bed, again, to check. He'll one day be 3 and think it's funny to see your face turn purple when he sneaks into the backyard and lets the water hose run, and the only way you know is when you're going out to put the trash in the bin and you slip in a gigantic mud puddle and call Husband because a sprinkler has busted (Nope. It's just the 3-year-old, watering the grass. For five hours).

Higher utility bills. There's not much you can do about them, unless you just turn them all off and Little House on the Prairie it.

2. The grocery bill that will make you weep.

It doesn't matter if you're breastfeeding or bottle feeding, you are in for a treat. You won't even recognize your grocery budget in a few years. Kids are always, always, always hungry, always, and you certainly don't want them bumming food of their friends at school, because you know what happens when they get sugar in their system. (What happens? Read on.)

3. The fact that bouncing off the walls is a real thing.

You will watch them do it after attending their friend's birthday parties. You'll see the evidence in wall nicks and holes their hands accidentally made when they ran into it too hard, and you'll make a mental note to fix it, but it will never happen. Because kids. And then you will vow never, ever to let them go to another birthday party. And then another invitation will come three days later, because they're in kindergarten and all 25 students have birthdays, and they have to invite everyone in their class. And you will let him go, again.

4. The gross, gross and grosser.

You will do grosser things than you ever thought you'd do. Ever. Because sometimes there will be a little boy who took his favorite Lightning McQueen car to the potty with him, because Lightning "wanted to watch," and now he's sitting in the toilet your boy just went #2 in, and you will have to reach your hand into that stank and pull Lightning back out. Getting a new one just won't do. Plus, remember the higher utility bills? Yeah, that goes for clogged pipes, too. Just close your eyes and fish it out. There's soap for that. Lots and lots of soap.

You may also be sitting enjoying a lovely dinner with friends when your 18-month-old starts upchucking something that looks like a cross between a cauliflower smoothie and no-butter mashed potatoes, and, rather than let it fall on the floor and make someone else clean it up with their handy mop and bucket, your reflexes will make you catch it. In your hands. Your bare hands. Your bare hands that just stuck a fry in your mouth.

And you may quite possibly open a door to a poop explosion every other day if you have twins who think it's funny to take their diapers off and time their bowel movements for the exact moment they're supposed to be sleeping for naps, and you will have to scrub it off all the cracks they've made in their cribs. Don't worry. There's soap for that, too.

5. The energy it takes to keep a house tidy.

It's not even worth it. They'll just undo all your work anyway. Hang up their winter jacket on the peg where it goes? In five minutes they'll just decide they want to wear it in the "fallish" weather that just blew in, bringing temperatures from 125 to 115 degrees. Get their school papers all organized and nice? They'll just want to show you something they made in school today, and it'll all end up on the floor anyway. Have a place for their shoes? Doesn't matter. They won't end up there. Just save your energy for others things. Like putting them back in bed four hundred times.

There is the one minute where you feel angry enough to strangle your 3-year-old because he just, for the four billionth time, marked in a library book while you were watching, just to do it, and then there's the moment (after 10 minutes of cool down and maybe a glass of wine) when he brings you the library book and asks you to read to him, and his eyes are just so dang beautiful, and yes, of course you'll do this for your precious little baby. There's the second where you want to lock him out of your room forever and ever and ever because he keeps coming in to ask questions like "Do penguins have knees" and "Why can't we have four dogs" and "How did I get out of your body when I was a baby," and all you know is you want to go to sleep, and then there is that other second where he comes in one more time and you take a deep breath and all he wants is another kiss and hug you don't often get anymore because he's getting too big too fast.

There's the moment when you can't stand the sight of him because he just ate his brother's vitamins he knows he's not supposed to touch because you've done this dance half a million times, and now you're going to have to call poison control, again, and they're totally going to know it's you even if you disguise your voice, and then there's the other moment when you just can't stand how much you love him.

You'll get used to these moments as a parent.

Soon, going anywhere outside a 10-mile radius of your home will feel like torture. This is mostly because of the question, "Are we almost there?" which will come out of their mouths exactly five minutes after packing in the car. And since you haven't even left the driveway, you'll know it's going to be a really long trip. This question will be asked every other minute for as long as it takes to get you anywhere. So just keep it short, if you know what's best for you. And if this question doesn't bother you so much, there will be other things. I Spy, for example. And Disney songs. And farts in an enclosed space.

8. The impossible: Leaving the house.

You're all dressed and put together and ready to go? All of you at the same time? Well, congratulations, because someone's about to puke all over himself. You made it out to the car and everyone's strapped? Someone will say his shoes aren't actually in the van like he thought, and could you help him find a pair, and you'll spend the next forty-five minutes looking for the matches to five lone shoes. You're about to walk out the door on time for once? Someone will discover how to open their Thermos of milk and dump it all over their brother's backside.

Late just comes with being a parent. Don't let anyone tell you any different, and don't let anyone make you feel guilty about it, either. They have no idea what it's like to leave with multiple neanderthals in tow.

No, I'm not talking about the anger or the frustration or the fear that maybe we shouldn't have done what we did. I mean the overwhelming emotion that hits us every time they're doing something amazing or wonderful or they say something brilliant or funny or they're just sitting there doing nothing. It's that feeling of love that launches us through all these unforeseen challenges.

So I guess if I'm weighing the options, I'd have to say that The Feeling outweighs all the rest.

But ask me again in a few years, when my grocery bill is higher than a mortgage.

More:
parenting adviceparenting humorRaising BoysParenting parents-dads
Newsletter Sign Up
Raise the kind of person you'd like to know
Subscribe to our parenting newsletter.
Successfully Subscribed!
Realness delivered to your inbox