In the wake of the publication of a Pew poll showing an increase in the false belief that Barack Obama is a Muslim, misperceptions have reached a new level of prominence in the national discourse, including a mention of the Muslim myth on Newsweek's cover. In addition, MIT political scientist Adam Berinsky released some new public opinion data on the topic Monday, so it seems like a good time to review what we do -- and don't -- know about misperceptions.

Belief in the Muslim myth has increased

In addition to the Muslim myth, polls have shown that a substantial fraction of the public believes Obama was not born in this country. Most recently, CNN found that 27% of Americans think Obama was "probably" or "definitely" born in another country (Berinsky similarly found in July that 27% said Obama was not born in this country.) The Newsweek poll mentioned above also found that 31% of Americans said the allegation that Obama "sympathizes with the goals of Islamic fundamentalists who want to impose Islamic law around the world" is "definitely" or "probably" true.

False beliefs about Obama are concentrated among Republicans

Pew found that the proportion of Republicans saying Obama is Muslim increased from 17% in March 2009 to 31% in August 2010 and the proportion who don't know increased from 28% to 39%. Similarly, CNN's poll showed that 41% of Republicans think Obama was "probably" or "definitely" not born here, a figure that corresponds closely to Berinsky's 46-47% (based on his bar chart). Newsweek also found that 52% of Republicans thought that the claim that Obama wanted to impose Islamic law was "definitely" or "probably" true. These figures are consistent with other polls showing differences by party in politically salient misperceptions (e.g., Iraq having WMD before the U.S. invasion). It's important to note that misperceptions are not confined to Republicans. Democrats, for instance, were far more likely than independents or Republicans to endorse the claim that the Bush administration was complicit in the 9/11 terrorist attacks in a 2006 Scripps poll, a 2009 PPP poll, and Berinsky's 2010 poll.

These large partisan differences in misperceptions appear to be the result of people's bias toward factual claims that reinforce their partisan or ideological views (selective acceptance). This pattern of motivated reasoning -- plus possible biases in the information to which people are exposed (selective exposure) -- appears to result in large partisan differentials in misperceptions along partisan or ideological lines (see my research here and here for more).

Misperceptions are not simply a function of ignorance

As Berinsky and many others have found, people who know more about politics (as measured by the questions political scientists typically use to measure political knowledge) tend to be less likely to hold false beliefs. However, that doesn't mean that the problem is simple ignorance. A better approach is to distinguish between ignorance (when you know you don't know the truth) and misinformation (when you falsely believe you know the truth). Politically salient misperceptions typically fall into the latter category, which is why they are so pernicious. For instance, I found that Republicans who believed they were knowledgeable about the Clinton and Obama health care plans were more likely to endorse false claims about them (Berinsky misstates my finding on this point).

In addition, elites often appear to play an important role in spreading false claims ranging from "death panels" to the Muslim myth and Obama supporting Islamic law. For this process to operate, partisans must be exposed to the message from elites, understand it, and integrate it into their belief system, which is not consistent with a simple story of ignorance. GW political scientist John Sides has provided evidence that is consistent with this account, showing that the persistence of the Obama Muslim myth increased more during Obama's presidency among Republicans with higher levels of education: 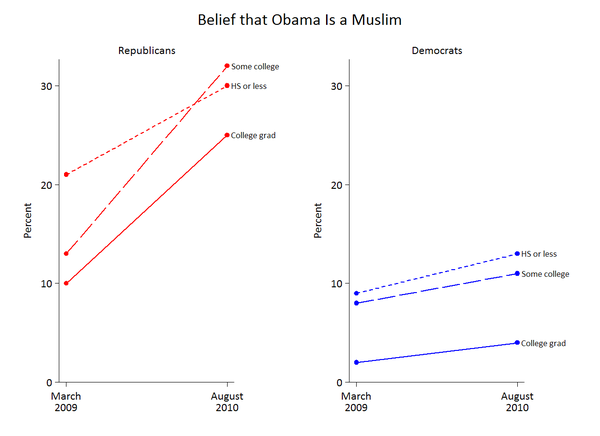 Voters' perceptions may be seriously skewed by partisan biases. For example, in a 1988 survey a majority of respondents who described themselves as strong Democrats said that inflation had "gotten worse" over the eight years of the Reagan administration; in fact, it had fallen from 13.5 percent in 1980 to 4.1 percent in 1988. Conversely, a majority of Republicans in a 1996 survey said that the federal budget deficit had increased under Bill Clinton; in fact, the deficit had shrunk from $255 billion to $22 billion. Surprisingly, misperceptions of this sort are often most prevalent among people who should know better--those who are generally well informed about politics, at least as evidenced by their answers to factual questions about political figures, issues, and textbook civics.

While the prevalence of these misperceptions has been repeatedly validated in national polls, it's important to note that the exact responses people provide will vary depending on question wording, context, etc. as in any other survey. For instance, in research with Reifler and Duke undergraduates, we found (PDF) that the presence of non-white interviewers appeared to influence how participants responded to corrective information about Obama's religion. Likewise, a study (PDF) recently published in the Journal of Experimental Social Psychology found that McCain supporters were more likely to accept the claim that Obama is Muslim when their racial identity was made salient.

Does this mean these beliefs aren't "real"? It's hard to know what that claim means. All survey responses are to a certain extent an artifact of the context in which they are solicited -- there is no way to measure what someone "really thinks." However, it's possible that people are expressing an ideological or partisan view as much as they are making a factual claim about the world. The strongest claim along these lines comes from Reason's Julian Sanchez, who suggests that misperceptions like the claim that Obama was not born in the U.S. are best conceptualized as "symbolic beliefs" rather than statements of what people believe to be literally true -- an argument that was subsequently endorsed by New York Times columnist Ross Douthat and ABC News polling consultant Gary Langer. Determining to what extent these beliefs are "symbolic" rather than literal is an important question for future research.

[Cross-posted to brendan-nyhan.com and Pollster.com]