Counting deaths is hard, especially in places where vital registration -- the process of recording deaths and producing death certificates -- is nonexistent or incomplete. This is the case in several West African countries, which are currently experiencing the worst outbreak of Ebola ever on record.

At least 1,552 people have already died from Ebola in this outbreak in Guinea, Sierra Leone, Liberia and Nigeria. This count comes from data collected by the national governments of these countries. It is reported to the World Health Organization (WHO) and updated at least once a week. Despite its apparent precision, it may not reflect the true toll of Ebola. The Ebola outbreak may also indirectly kill people, by causing a sharp increase in non-Ebola deaths (e.g., deaths due to Malaria, typhoid fever or other diseases common in these areas). Can this "collateral damage" be larger than the recorded death toll, as several reports in the media have suggested?

Ebola's collateral damage comes about because the disease paralyzes the health systems of affected countries. First, a number of health workers (e.g., 67 in Liberia) have died after becoming infected in the course of treating Ebola patients. Among the health workers who haven't fallen ill, some have gone on strike or resigned due to fear of infection.

Second, those who are still bravely working have often had to limit or discontinue non-Ebola medical services. Entire health facilities are turned into Ebola isolation centers that cannot be used to treat other patients due to infection control measures. As Liberian President Ellen Johnson-Sirleaf remarked, "Health-care practitioners are afraid to accept new patients." Armed with often-inadequate personal protective equipment (PPE), they may fear being exposed to bodily fluids, potentially filled with Ebola -- even if a patient initially consulted for Malaria, diarrhea, or a difficult delivery. 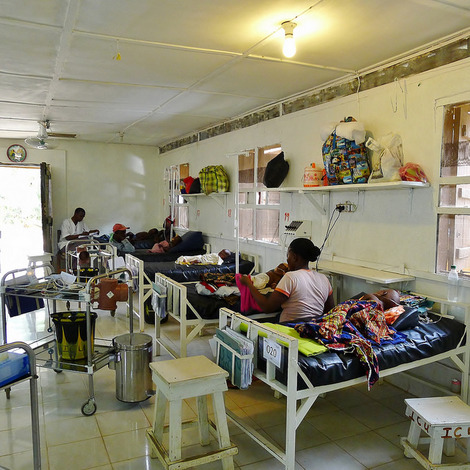 Finally, despite a number of survivors, Ebola is widely seen as a death sentence. Hospitals have gained a reputation as places where someone may get infected with Ebola, even if he or she presented with something else. Fear of infection thus keeps people away from health facilities. Instead of seeking medical care, patients may try to obtain (often inadequate) treatment directly from pharmacies, or not seek any treatment at all.

In this context where healthcare services are limited and patients do not seek care, common diseases such as malaria will go unaddressed and the number of deaths they cause may spike.

Can we count Ebola's collateral damage?

Whereas we get frequent updates about the number of deaths from Ebola, we only have outdated and imprecise information about the other diseases people die of in these countries, given the limited vital registration. The most recent estimates were produced before the outbreak (between 2010 and 2013) either by the WHO or by the Institute for Health Metrics and Evaluation (IHME, based in Seattle). Both used data from censuses (conducted every 10 years) or from national surveys (conducted every 5 years or so), later processed through complex statistical models. The resulting estimates are fraught with uncertainty: for example, WHO estimated that there were 2,900 malaria deaths in Liberia in 2012, while IHME's estimate was almost three times larger (7,700).

In some of the countries neighboring Ebola's hot zone (e.g., Senegal, Cote d'Ivoire), there are "health and demographic surveillance systems", which provide more precise and up-to-date information on mortality in small populations. Elsewhere, researchers have attempted to improve vital registration by using mobile phones. But none of these systems have been set up in Guinea, Sierra Leone or Liberia. Without real-time data on all deaths occurring in the midst of the Ebola outbreak, we cannot measure Ebola's collateral damage. We will only be able to produce an estimate once the outbreak is over, after demographers have collected extensive data on mortality.

Ebola's collateral damage may not be as extensive as we think

Even without such data however, there are reasons to think that Ebola's collateral damage may not be as large as we fear.

Not all non-Ebola deaths that occur during the Ebola outbreak should be counted as "collateral damage". This should only include those deaths that health systems could have prevented if the outbreak had not happened. It's hard to know exactly how many deaths the health systems in Liberia, Guinea or Sierra Leone may have been able to prevent, but likely few. Ebola is a disease that preys on weak and unprepared health systems, and these were already some of the weakest in the world. In 2010, Sierra Leone had only 130 doctors to serve its nearly 6 million people; Liberia had 60 to serve 4.2 million people. Sierra Leone had the highest child mortality rate in the world. Liberia had the second highest maternal mortality ratio. In Guinea in 2012, only 1% of children with fever were treated with the recommended anti-malarials, and only 1 out of 3 children had received the vaccines they needed. The heartbreaking stories of patients currently not receiving (or being denied) treatment or being turned away from health facilities were thus probably already common prior to the Ebola outbreak.

The Ebola outbreak does not only affect health systems but can also modify the economic activity, movements, human contacts, sexual activity, and hygienic behaviors of individuals. And it does so in ways that have complicated effects on the health of populations. For example, widely reported food shortages may increase vulnerability to diseases. Violently enforced preventive measures (e.g., quarantines) may also lead to additional deaths. But, the insistence on hand washing to prevent Ebola may also reduce the transmission of common food-borne pathogens (e.g., Typhoid fever, Hepatitis A) or of the flu. Because of quarantines and curfews imposed by governments (or because of general fear of exposure), road traffic may decline, thus leading to fewer transportation-related deaths. If individuals avoid close contacts with others to prevent Ebola, then some respiratory infections may spread less efficiently. Some of these mechanisms may counteract the extent of Ebola's collateral damage. 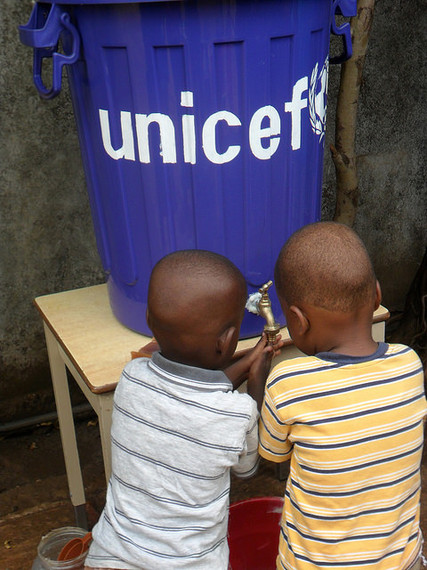 Children wash hands to protect against Ebola in the capital of Guinea, Conakry. Photo by UNICEF Guinea (Creative Commons)

While we're left guessing about Ebola's collateral damage, what do we know about its direct death toll? WHO has repeatedly stated that a number of Ebola deaths may not have been counted. But even according to these admittedly under-estimated figures, the scale of the outbreak has increased dramatically in recent weeks. Ebola is now claiming lives at a staggering rate, especially in Liberia (the most affected country). Between May 29th and August 26th, Ebola has killed on average a little over 7 people per day in that country (see figure). This is already more than HIV/AIDS or tuberculosis used to kill before the outbreak. During this period however, the daily death rate from Ebola has increased "exponentially", i.e., it has been multiplied by a factor of 3 from one month to the next. There were two Ebola deaths per day in June vs. six deaths per day in July and now 18 deaths per day in August. This latter rate is well above those estimated for malaria and respiratory infections, the leading killers prior to the outbreak. 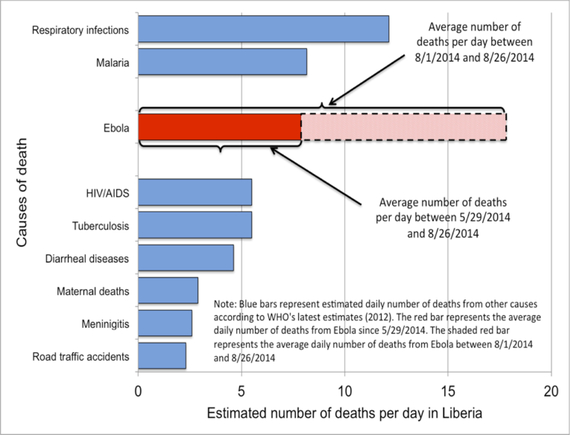 In total, Ebola has now already killed 694 people in Liberia in only 3 months. If the Ebola outbreak continues its exponential progression however (i.e., if the daily number of Ebola deaths is multiplied by 3 every month), the number of Ebola deaths will be much larger very soon. For example, it would only take 48 days for Ebola to claim as many lives as Malaria used to claim in Liberia in an entire year before the outbreak according to WHO (2,900 deaths). It would take 57 days for Ebola to match the yearly total of deaths due to respiratory infections (approximately 4,200 deaths), previously the leading cause of death. Since WHO now estimates that it will take 6-9 months before public health interventions are able to interrupt Ebola transmission, the direct death toll from the epidemic may well be even larger.

Concern that the Ebola outbreak will cause an increase in non-Ebola deaths by paralyzing health systems is entirely justified. We do not believe however that this "collateral damage" will be larger than the death toll from the outbreak itself.