Much has been made of Donald Trump's tweets sent over the weekend calling Hillary Clinton the "most corrupt candidate ever." (If you have no idea what I'm talking about, here's an excellent rundown on the debacle by Anthony Smith at Mic.com.) In the days since then, Trump has defended his tweet by saying the image was meant to convey a sheriff's badge: 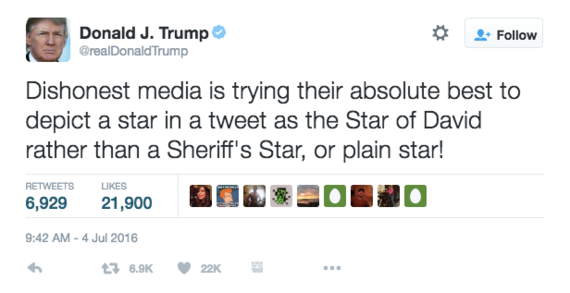 Up to this point, of all the things people have said about Trump, the only one I disagree with is when I hear people call him an idiot. Sure, he says highly unintelligent things much of the time, but I believe he says those things because he is a) ignorant, or b) a master manipulator bent on saying whatever he feels will win media attention. Even now, I'm not ready to call him an idiot.

But he is media illiterate. Media literacy - the ability to read, write, access and analyze digital media - is sometimes referred to as one of the "new literacies," but don't let that fool you into thinking media literacy is any less essential than knowing your alphabet. And we need a president with media literacy skills that are at least as basic as those we teach young people in our programs at The LAMP.

For starters, we would never teach our students that it's ok to share something without first considering its source. Whether we're talking about an image, a video or a link to something else online, retweets are often seen as endorsements, even if you explicitly say otherwise in your profile (most people won't check that before passing judgment if you share something terrible). Trump shared an image that we know originated from a white supremacist account. Whether or not the star read 'Star of David' or 'sheriff's badge' to him personally, the fact is that the person or people who created the image intended it to be a Jewish symbol. If he knew this and shared it anyway, he's illiterate. If he didn't bother to look into where the image came from, he's still illiterate. Feigning astonishment that anyone would interpret the image as a Star of David, even after bothering to delete the offensive tweet, is - at minimum - more illiteracy.

Of course the star tweet is far from the first time Trump has showed off his illiteracy. He's demonstrated this on numerous occasions both large and small, from his history as a "birther" to his failure to understand the meaning of libel, to a more recent tweet failing to cite the source for a quote that Clinton is "guilty as hell" and owes information on missing emails: 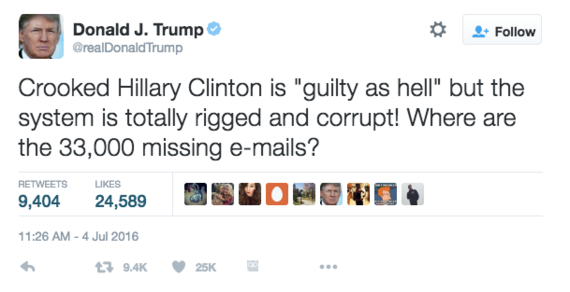 Stay tuned for more news, and get plenty of resources for decoding media, by following The LAMP on Twitter at @thelampnyc or visiting online at www.thelamp.org.