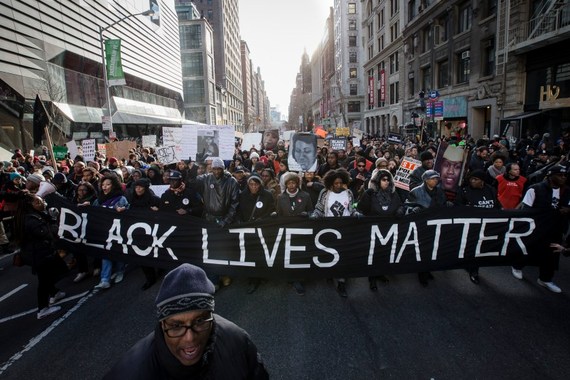 Last week was pretty hard for Americans. Two young African American men were brutality killed by police and than five officers were killed in Dallas, during a peaceful Black Lives Matter protest. Now we really need to talk about a major issue that is happening around the States and that is police brutality. I know more people are talking about and mourning the five police officers that died and that is the right thing to do and the human thing to do. But we are forgetting the two black men who lost their lives in a terrible way and these types of killings are happening more frequently in America.

I heard one time a black activist say that black men are either being shot by police or being incarcerated. When he said that it really opened my mind, because black men and boys have to constantly follow a particular set of guidelines that will secure them their safety that no other men or boys really need to follow. The fact that parents live in constant fear for their sons lives and fear that one day their son is not coming home. The fact parents teach their son to not go out at night, to never wear a hoodie, to respect police officers even if they don't respect them back is a huge problem of itself and it's a societal issue that if we don't stop, will keep happening to more men and boys like Eric Garner, Alton Sterling and Philando Castle (may you all rest in peace).

In the Albuquerque police department between 2009 to 2012 officers were involved in 20 of the police shootings which majority of them were unconstitutional. And in their investigation, they have found that the police department often use deadly force where there is no threat. And police officers often use lethal weapons, like tasers towards citizen who are non-threatening.

The civil investigation toward Cleveland police department is a simpler story. There were reports that the Cleveland police department were engaging in a pattern of using unreasonable and unnecessary force. Which include, shootings and head strikes, using lethal weapons like tasers, chemical spares and fists. They also used unnecessary force when dealing with a person who has mental illness.

Now I can go on and on about statistics and in what police department are doing in every state, but I am not going to, because I think you get the picture and if I continue talking about statistics, this article will be ten page these paper. Instead let's talk about what should be done to end police violence.

When you have an alcohol problem, you often go to rehab to get better. The first thing they teach you before anything else is admitting that you have a problem. Before all the therapy, the doctors and you eventually being sober. You need to admit that you have a problem. When it comes to police brutality it is the same thing. There are some people that still don't think this is a problem and Police departments, Governors and even other politicians often don't admit there's a problem. When there is a police shooting and a Governor or chief of polices address the media, by saying and I quote, "I am deeply sadden, shocked and surprised that this happened." Does undermine the ongoing violence in the U.S. Now those words are not bad to use and some would say they are very kind words, which they are. But when you use the word shocked or surprised, it often means that it's recently been an issue and forget that this has been a huge problem for years.

Another way that I think will solve the problem with police brutality, is stop criminalizing black men. When news reports of police shooting that killed a black men or boy, the news has to always treat them as criminals. He was selling cigarettes in the streets, he robbed a store, he had a gun on him. It somehow justifies the police's actions, by saying they're doing their job. NO YOU WEREN'T! Let me tell you when a police has the right to even take his or her gun off of his or her belt is when the suspect is pointing a gun at you or at the victim and is going to kill you in five seconds, that's the only time police have the right to raise their gun. If a black man is carrying a gun but he is doing no harm to anyone else (which in the South, is every Tuesday.) and you shot him or if a black man is running for his life and you shot him in the back that's your fault, not theirs.

Earlier in the article I talked about the U.S justice department investigating the Cleveland police department and the Albuquerque police department and in the end they concluded and I 100% agree that the officers were not provided with good training, police guidance and supervision. Like I said before I 100% agree. So many police officers go to the academy, than complete a test and off they go to the field. Yeah, that's a bad idea. Police officers and specially rookie police officers, don't know how to deal with hard situation and how to work with visible minority group. So when they go to the field they could treat people differently and even act violently towards them and demonize them. Police should be trained the minute they were there badge how to deal with citizens and difficult situations.

There are many ways to end police brutality, I just gave three ways that I believe can make a difference. I do believe that police are heros and that we need the police. Police do a lot of good in our communities and not all police are the same and we shouldn't wipe all police under the same brush, just like we shouldn't wipe all black, Muslim and Latino citizens under the same brush as well. But denying that there is no police violence in the States, is going to have major consequences in the future.