It's one of the "in" things to do, so we're doing it: raising chickens.

A couple of months ago, four chicks were purchased at our local Co-op -- along with a bag of crumbles (a new word for me), various water and food containers, a sack of wood shavings and a heat lamp.

These chickens are not the ones where you eventually wring their necks, pluck the feathers, then cut them up and fry them. These are layers. They lay eggs only. We will still be going to the supermarket or The Colonel if we want some for dinner. I always thought that if you raised these things you could do whatever you wanted to with them. I was wrong.

A brooder was built (not by me). They were plopped in. After a few days, two developed pasty-butt (a new word for me). Other than that, they seemed fine.

My more-significant-than-I-am other and her son did everything. I was simply the chicken waiter, watching the water and the crumbles. If the chicks knocked over the water or the crumbles, it was my fault. I had to clean it up while being castigated for incompetence.

Apparently, these four fowl are separate breeds. They do all look a bit different. That's all I know. 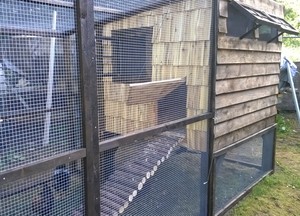 A very impressive coop was built from scratch (not by me). The four almost full-grown chickens moved in. Sometime during the night they knocked over the water and it was my fault. 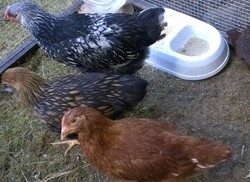 Of course, I've read everything every chicken web ite has to say about chickens. I'm not impressed. One states, "Chickens show their gratitude when you give them treats." I've yet to experience this. When I walk into the run and give out treats, it seems to me that they're thinking, '...What the hell do you want? Oh, you've got some treats. These are good. Any more? No? Well, I'll be on my way, then. And so should you.'

We're still waiting for an egg. While only a tiny fraction was spent, I did some quick figuring with a calculator. Materials, incidentals, food, electricity, labor hours -- and that first egg will be worth $6,432.86.

However, applying the laws of economics, with each hen laying, say, five eggs a week, and allowing for breakage, and future feed and labor, an egg laid two years from today will cost only $14.34, or $172.08 a dozen.

We're all looking forward to biting into our first thousand-dollar omelette.