For regular gym-goers it's fairly common to notice someone's cool new mesh cut out leggings and say, "love those new leggings, who makes them?" Or compliment someone's new Nike kicks which pair perfectly with the season's hottest colors. Athleisure wear is officially high fashion these days and is gregariously discussed. But when it comes to make up at the gym, well that's a whole other story. I have rarely, if ever, heard a woman say, "great shade of red lipstick, is it MAC?" while grabbing a set of dumbbells off the rack.

Even though make up falls under the umbrella of fashion, when it comes to wearing it at the gym, it's not a topic as openly discussed as the latest pair of Lulu's. Actually, it's somewhat controversial as I learned by reading a long string of comments on Reddit where one woman started a thread by saying she goes to the gym after work with a full face of make up and coiffed hair. She queried other female Redditors: "Dose it bother you or do you ever have snippy thoughts or comments about women who do this? Ive always wondered!" 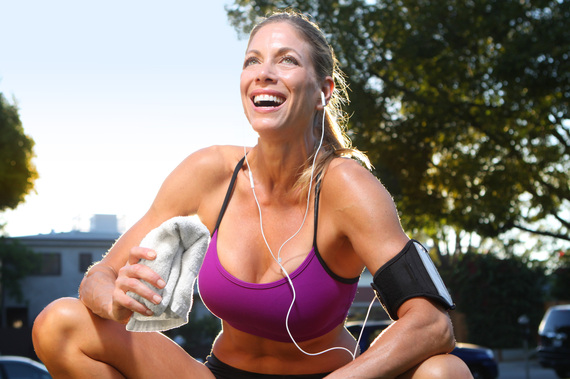 I admit, in my teens and 20's, I would not have walked out the door without my make up on. I truly felt naked without it. But I was much less secure with myself and had much more time on my hands then. By the time I was 30, make up was something I only put on to go anywhere other than to workout. One day I was looking at a student of mine who's in her 20's, is an actress, and has transformed her body into statuesque perfection over the years I've know her. She's a knockout.... I think. Then, I realized I have never seen her without a full face of perfectly smoldering eyes in black shadow and eyeliner and evenly smoothed out, never shiny skin.

The image stuck with me and I felt compelled to find out if others think about this too. I asked my Facebook friends what their thoughts were on women who wear make up to the gym. Do we judge maybe just a teensy weensy bit?

In general, here's a summary of what people think (or say they think):

I asked my S.O. his thoughts about women wearing make up at the gym. For a polite, mid-western guy who tries to be judicious in his opinions, he tends to notice when a woman is wearing full make up at the gym especially when they are making no effort to get their pump on. "Those women," he says, "are there to get hit on."

There are two opposite schools of thought. There are those who fiercely defend the freedom of the pore, "sweating in make up is so bad for your skin!" My friend Steve Wolfe is one such advocate. He admits it's odd for a man to comment about this on Facebook, but nonetheless he wrote unequivocally, "NO MAKE UP." That's in all caps ladies. I think it's only fair to mention my friend Steve is also a dermatologist.

And in the other camp are the ladies who DGAF what you think. My friend Lovey who happens to be a fashion designer says it best, "I wouldn't walk my dog at 2am without make up!!" As for any negative effects to wearing make up to the gym, she admits that it may not be great for the pores and that she's not sure if "men think it's stupid but, ...it's better than them thinking I need a bit of help haha!!" Now who can argue with that logic?

Do you judge women who wear make up to the gym?