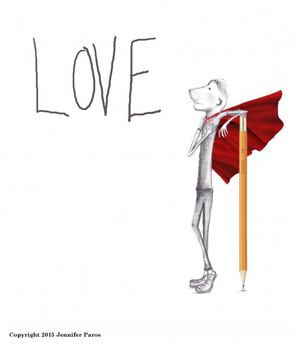 When book people, either professional or casual enthusiasts, get together, they often find themselves talking about "great books." Hemmingway said he knew he had read a great book if he felt changed after reading it. I think everyone who reads regularly has experienced this. However, whether the great books you talk about are on your own personal list, or the cannon with which we're all familiar, I would encourage you not to discuss them as if they were somehow a triumph of craft. I have nothing against craft, I edit a magazine full of articles on craft, but a book that stays with us for years after we've read it is much more than mere craft. In almost every case, a great books is the result of three things: A person who loves to write, writing what they most want to write, in the way they most want to write it.

A great book is a work of love -- not craft, not intelligence, not discipline, but love. And that love expresses itself in this question asked and answered over and over again: What do I most want to say? A sentence can be grammatically correct, it can be intellectually correct, but if it is not what the author most wanted to say, then it is incorrect. Every day when a writer sits down to write, they must ask themselves this question of, "What do I most want to say?" over and over again.

You can try to ask yourself, "What should I write that will sell a lot of books?" or, "What should I write that will win me a lot of awards?" but these questions, tempting and even practical as they seem, are unanswerable. The answers to these questions lie in the hearts of other people, in a writer's potential readers or critics or agents and editors -- and I can no more know what it is anyone else desires most in a book, than anyone else can tell me what it is I most want to write. Whether we like it or not, we are all choosing our own way, and the sovereignty of the soul, of the heart, is absolute, because there is no one in the world who can tell us, even if we wanted them to, what we most want. We always have to go find that answer ourselves. And sometimes we find it in the books we write, and in the books we read.

When I had arrived a point in my life where I knew it was time to reach out to the local writing community, I went to the poet and novelist David Wagoner who teaches at Richard Hugo House in Seattle and showed him something of mine. He read it, and then asked me what I wanted to do, and I told him I wanted to be a novelist, and he said, "I wish you well. It's a lonely road."

And it is sometimes, but it would be far lonelier if I were the only one on it. There is a reason the Hero's Journey is an enduring story archetype. And there is a reason we share these stories of a hero going on a journey of discovery into the unknown. We don't share these stories to learn the way. No story, no teacher, no friend, can show us the way because they cannot answer the question of what we want most. I believe everyone wants nothing more than to answer this question authentically, but we are all frightened at one point or another to do so, or we believe that pursuing what we love most is somehow meaningless or trivial, or even selfish, as if what we want most wouldn't always point us toward other people. But I also believe that a really good story reminds us that this journey is meaningful and worth it, and often that's all we need to once again answer the question, "What do I want most?"

Author of Write Within Yourself, Fearless Writing, and Editor-in-Chief of Author magazine.