The cover of Redeye on Wednesday featured the headline "Sign of the Times" and, according the blurb, the cover story explores "Activists Push for More Gender Neutral Bathrooms in Chicago." How exciting! I'm so glad Chicago is moving that direction and one of our free dailies is covering it. Pun intended.

I first saw the image on Instagram the night before and then again on my walk to the train where Redeye's pepper the sidewalk and litter the train cars. My point being, almost everyone in Chicago that can see will most likely consume this image. Far few less will consume the text and chances are even fewer will read the article.

Which is why this isn't about the article -- this is about the cover art. Cover art that is explicitly making women invisible by painting over them. This is not a metaphor. You can see it. This is also not what gender-neutral means, at all. Gender neutrality means working towards a world where no individual is bound by normative gender roles that seek to limit their identity. It does not mean erasing one gender in favor of another. Especially the oppressed one.

Rather than suggest an overall move towards eliminating male and female identifiers on restrooms, the image does illustrate a very uncomfortable truth in our culture. A truth so deeply embedded in all of our psyches and systems that it is almost impossible to recognize. The truth being that male is our default definition for human being. That gender-neutral means being more like a man. That women are: invisible, unnecessary, less valuable...need I go on?

The subtext in this image is not up for debate and the comments by Redeye designer Sara Amato (@saamato) are just as disappointing as the image itself. 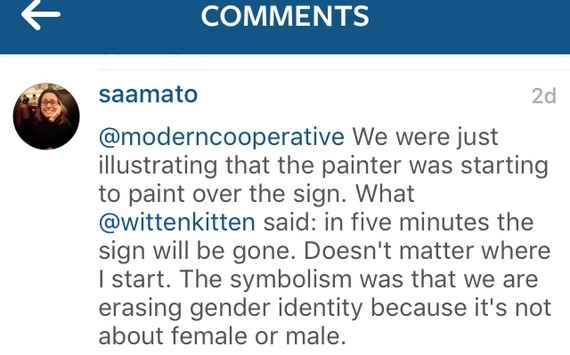 The argument that I was "reading too much into it" prompts a counter-argument: why didn't the designer or the person in charge of approving this cover art not read more into it?

Redeye and staff, I ask you to please consider the following:

1. The average American consumes about 15 ½ hours of media a day, according to a recent report, with new digital sources (like Instagram) having major effects on most forms of media consumption. Media is built on images. These images are part of what we use to define ourselves and the world we live in. Research on the negative effects of media consumption is plentiful, particularly when it comes to women. Negative body image, eating disorders, low self-esteem and more have been linked to gender and media influence. You think seeing your likeness being painted over by a mainstream news source is helping? Um, no. So, while this cover art may not have been intentionally meant to communicate sexist messages, it still does. 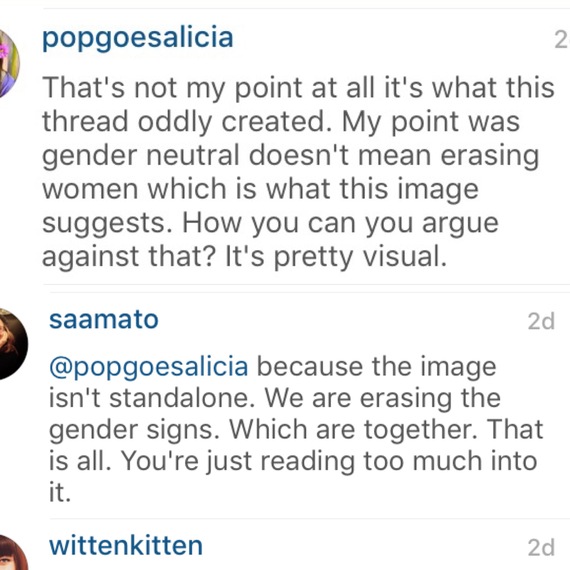 2. We live in a patriarchy which means a male dominated society. All things and people are not equal. Men still dominate most industries, especially media. The defense that it "doesn't matter where I start," is totally inaccurate and quite ignorant. It does matter. It matters in a world where women are consistently shamed and silenced, excluded and alienated, paid less for the same work, ridiculed for being leaders, Still fighting for the right to control their own bodies.

3. According to the latest research, Chicago boasts the only newspaper in the country to not only equal but also exceed gender parity in bylines, The Chicago Sun-Times. Our city is teeming with talented women in comedy, theater, film, design and science. And yet we are clearly missing critical dialogues when it comes to design and publishing practices.

Redeye missed an excellent opportunity to create an image that more accurately reflects not only our citywide progression towards gender-neutral restrooms but also a cultural shift towards gender inclusivity and instead painted a misleading picture reflecting subtle, sexist ideologies. 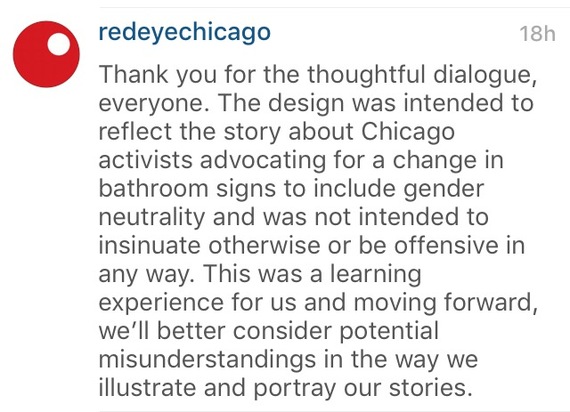