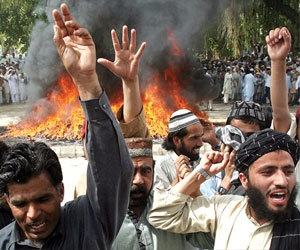 Nadeem Farooq Paracha, or NFP as he is popularly known is perhaps Pakistan's most popular and yet controversial English language journalist. I started to follow him in 1995-96 and over the years, my opinion about him has oscillated a lot. At one time I used to think of him a left wing lunatic who was obsessed about the way 1960s transformed USA and thought that same thing could happen to Pakistan if music industry could reorient itself to producing "social" kind of songs.

But over the years, he has evolved a lot and so have I. I have transformed from a delusional hyperbolic "nationalist" and today I consider myself a center to left person, whereas NFP has also fused his idealism with a healthy dose of realism! Today in my opinion he is someone whose heart is in the right place but at the same time he understands the ground realities.

So when his book titled as "End of the Past" came out I hurriedly ordered it. Generally we often get disappointed when expectations are extremely high but in this case I am much relieved that this endeavor of his has not led to any disappointment.

His book is a must read for all those who want to understand as to when and how Pakistan descended into current state of affairs. What makes this book different is that Nadeem has actually used both first person as well as objective point of view and this style of narration has illustrated the way events and the political decisions actually impacted the society at the individual level.

The central focus is on the way Pakistan started to transform from a relatively moderate and pluralistic society to an extremist and intolerant one. Although today's headlines about Pakistan often create the impression that the country from its inception has always been like that, but according to Nadeem, things were different in 1960s and 1970s. Pakistan of those decades was relatively tolerant and although religion was a dominant aspect back then also but the religious thought of those days was more moderate and accommodating of personal freedoms and minorities.

In fact Nadeem explicitly mentions that Pakistan' genesis was ethnic as appeal to Muslims for a separate homeland was made on those grounds. Islam was in fact used as a rallying tactic and nothing else. Pakistan was visualized as country for Muslims and not as a Sharia state.

Then what happened? Why Pakistan over the decades transformed into a different kind of society? Nadeem has interesting answers regarding this puzzle. First, some of the leaders who were instrumental in Pakistan movement could not wriggle themselves out of the movement mode and continued their practice of projecting Islam as a rallying call in places like Khyber Pukhtunkhawa (a Pashtun majority province) as the Pashtun nationalists had initially refused to join Pakistan. The idea was to use Islam for to subdue ethnolinguistic tendencies by projecting Islam as the common unifying cause. The same tactic was also used to tackle with the growing Bengali resentment after the government imposed Urdu as a national language.

Ironically the forces which had actually opposed creation of Pakistan-religious parties like Jamat Islami, now became the vanguards of this Islamic thrust. Gradually Pakistan started to tread on the path of Islamization which really accelerated in 1970s particularly after the breakup of Pakistan.

In 1971, Bhutto a populist leader took over after the breakup of Pakistan on a socialist manifesto but after first two years , he also veered towards Islamic direction and actually introduced several Islamic clauses in the 1973 constitution. Moreover, in order to appease the religious hardliners, Bhutto government also made important changes in the education curriculum to bring it in line with Islamic ideology.

What was happening at the governmental level was also supplemented by important developments in the Pakistani society. According to Nadeem, the labor migration to the gulf countries in 1970s provides another clue as to why Pakistan started to descent into extremism. Those countries were cash rich due to oil but at the same time needed labor, both skilled and unskilled and Pakistan became one of the important sources for meeting this gap. However this migration also resulted in promoting the Wahabi ideology in Pakistan as it was the dominant ideology in those countries and Pakistani workers, often hailing from middle and lower middleclass became indoctrinated.

A major portion of the book deals with the dictatorship of General Zia which is arguably the worst part of Pakistan's history particularly with respect to Islamic radicalization. This was also the time when Nadeem was himself becoming more politically awakened and started to get involved in student politics. He has narrated his experiences in that regard great detail, particularly his association with PSF ( student wing of then left leaning Pakistan Peoples Party). This part of the book is actually the best because the effect of macro level developments are traced on the society at the individual level. Nadeem has given example of several of his friends and relatives, who gradually transformed as the government continued its Islamization drive.

Nadeem has also covered taboo subjects like sex, drugs and alcohol in the society and his point of view is thought provoking and refreshingly different from normal psuedo moralistic nonsense perpetuated in the media.

One glaring shortcoming of the book is the absence of evaluation of military in Pakistan. Although Nadeem has lambasted Zia ( who ruled Pakistan as Martial Law administrator) but has avoided critisizing military as an institution. This does come as a surprise given the omnipotent role military has performed and continues to perform in Pakistan.

However, this shortcoming apart, the book is still an excellent contribution on Pakistan and is a must buy for all those who want to understand it.