There's been a lot of talk recently about the economy. Has it bottomed? Are we recovering? Will we see a "V" shaped bounce? Or a "U"? Or a "W"?
Since most of the economic numbers are still negative, it seems a little premature to talk about a recovery. Nevertheless, since the cheerleaders of the economy have brought it up, let's examine exactly what is going to lead this economy out of our deep recession.

In order to do that we must look at a topic that the Green Shoots crowd doesn't mention much -- the fundamentals of the economy.

I'm going to make this as simple and uncontroversial as possible.

Since consumer spending is more than 70% of the American economy, let's start there. 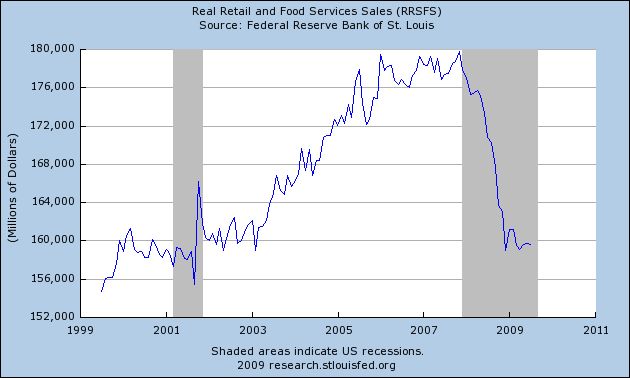 This chart shows us clearly why the economy has contracted so much. It also shows a clear bottom in consumer spending. The question is whether than bottom is temporary or permanent?
To answer that we must look at the fiscal health of the consumer. There are two measurements of that - money coming in and money going out. 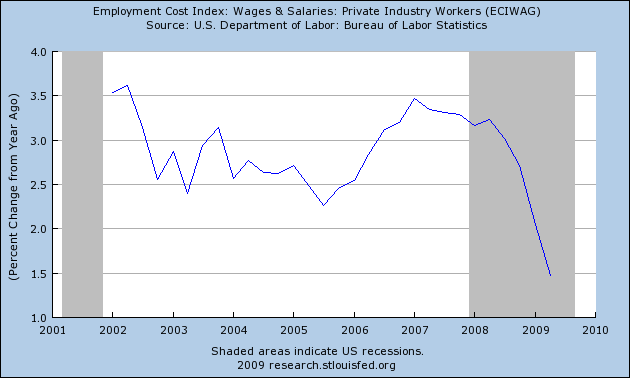 As you can see, workers have virtually stopped getting raises, and that assumes that people are still working. 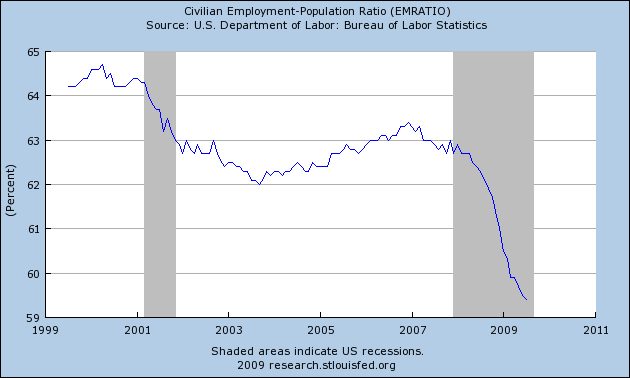 Obviously the American worker's income is under incredible pressure, and this is translating to less buying. The tiny downward correction on the number of unemployed in the chart above is due to nearly half a million workers no longer being counted as unemployed despite not getting new jobs.

There is another element to the American consumer's balance sheet, and that is savings and debt. 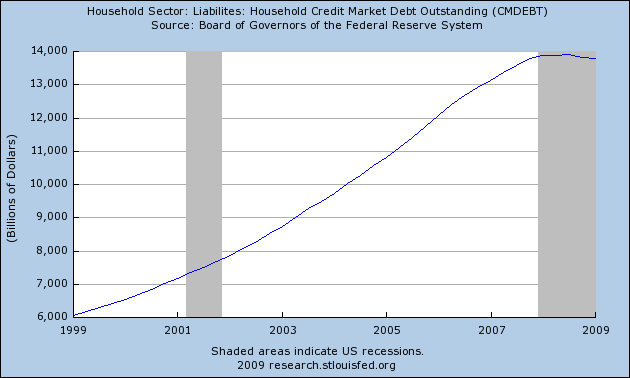 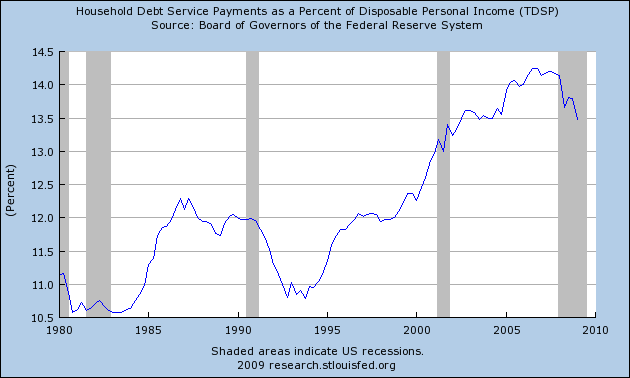 While there has been a modest improvement in the debt servicing levels of the American consumer, there has been very little improvement for overall debt levels. This is a reflection of lower interest rates, not to debt actually being paid down.

The debt charts are beginning to move the right way, but they are nowhere near close to what can be considered "healthy".

The San Francisco Federal Reserve put it this way.

The combination of higher debt and lower saving enabled personal consumption expenditures to grow faster than disposable income, providing a significant boost to U.S. economic growth over the period.

In the long-run, however, consumption cannot grow faster than income because there is an upper limit to how much debt households can service, based on their incomes. For many U.S. households, current debt levels appear too high, as evidenced by the sharp rise in delinquencies and foreclosures in recent years. To achieve a sustainable level of debt relative to income, households may need to undergo a prolonged period of deleveraging, whereby debt is reduced and saving is increased.

On the other side of the coin is America's saving and investment. 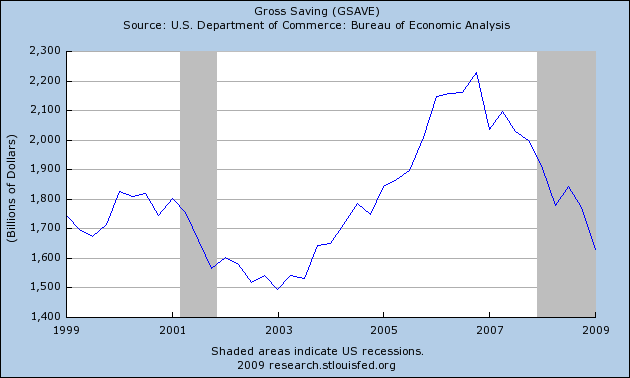 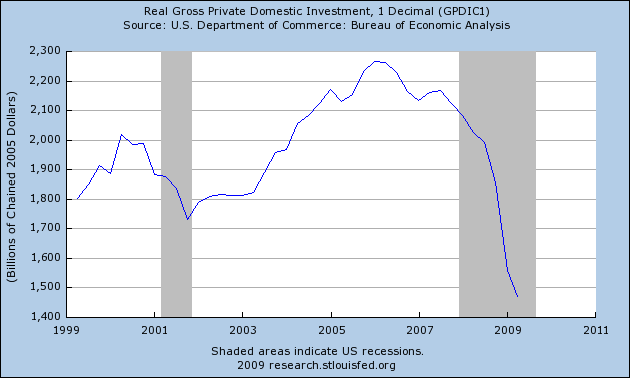 These two charts are the most damning of all. Without saving and investing there can be no sustained economic recovery. Period. This is an absolute disaster.
Not only do these charts show no bottom, they are moving in the wrong direction at a worsening rate. Until these charts reverse the fundamentals of the economy will get worse.
The IMF summed up the situation this way.

Directors observed that the crisis will have important implications for the role of the United States in the global economy. The U.S. consumer is unlikely to play the role of global "buyer of last resort" -- suggesting that other regions will need to play an increased role in supporting global growth.

Not all of the economy is domestic. America does get some economic support from foreign trade. 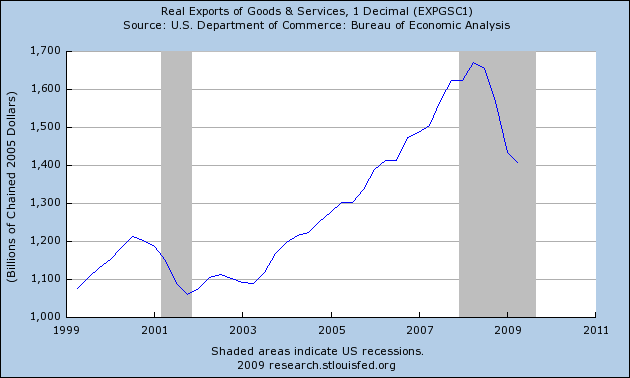 Of course there is one more element of the economy that I haven't covered here, and it is booming! 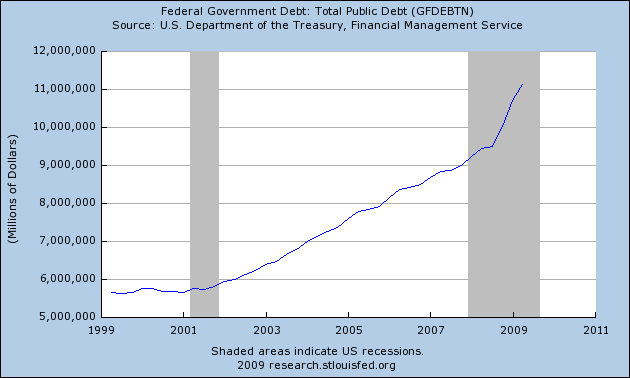 Lately there has been some improved housing numbers, but there are several caveats to them. For starters, the marginal improvement in comparisons are to the disastrous selling season of mid-2008.

Secondly, 43% of all home sales last quarter were first-time home buyers. Normally that would be a good thing, but this time it is a reflection of the government's $8,000 tax credit that people are rushing to take advantage of. Some people are even using it as a down payment.
In case people have already forgotten, borrowers that require extraordinary help getting into a house are much more likely to default on their mortgages. It looks like an attempt at reinflating the housing bubble.

Finally, those small signs of price increases are due entirely to more expensive homes being forced onto the market.

The other positive economic number we've seen recently is in auto sales. This is due to the recently ended cash-for-clunkers program.

So the spiraling government debt and the two most positive economic numbers are directly linked. With that in mind you have to ask yourself, what will the economic recovery build upon?