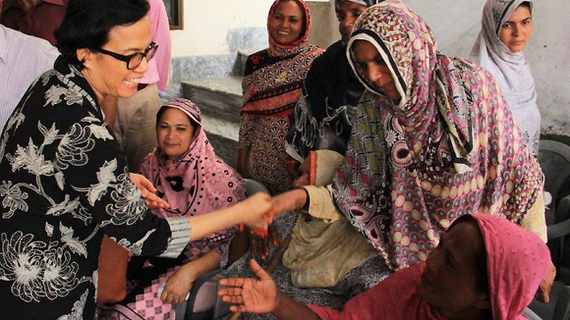 Meeting with beneficiaries of the Benazir Income Support Programme in Lahore, Pakistan.

As Pakistan readies to celebrate its independence day, we can all feel satisfied about progress in restoring macroeconomic stability, but should also realize that the country can and should do much better. Pakistan has many assets of which it can make better use—from its vast water and river endowment, to its coastline and cities, to its natural resources. And there are upsides: a growing middle class, a lively informal economy and a strong influx of remittances. Pakistan can also be proud of the first peaceful transfer of power between two civilian governments.

But to reach its full potential, Pakistan needs to focus on two critical areas, both obvious and urgent. It needs to ensure that its people have the means to fully participate in and contribute to the economy. And it needs to integrate itself more, globally and regionally.

The first challenge is demographic. As a result of rapid population growth, 1.5 million youngsters reach the working age each year. The question is, will the private sector be able to provide the jobs they need and want? And will the youth have the skills to get good jobs? Pakistan must do far better in education. Primary school net enrollment is about 57%, well below other South Asian countries. Enrollment drops by half in middle school, with much lower levels for girls and children from poor families. This is not a good foundation to build on.

It is not surprising, then, that Pakistan also struggles to give all its citizens the opportunity to participate in building better lives for themselves. Only 25% of women participate in the labor force, compared to 50% and 80% in most developing countries. Women and girls deserve better. Research shows that girls with little or no education are far more likely to be married as children, suffer domestic violence, and live in poverty. This harms not only them, but also their children, their communities and the economy. Greater gender equality can enhance productivity and improve development outcomes for the next generation. It is smart economics.

Pakistan has taken steps to empower women. The Benazir Income Support Program, supported by the World Bank, has provided millions of women with national ID cards and makes direct payments to them, strengthening their ability to take decisions and move out of poverty.

Reducing population growth while expanding opportunity can also play an important economic role. Shifting from a family of six, with one working adult, to a family of four, with the two working adults, triples the income per person, and this in turn allows greater savings and investments. Think of the dividends if more youngsters and girls are better educated, if women can participate freely in the economy, and if households have room to save and invest more.

The second challenge is for Pakistan to use its neighborhood to its advantage.

Despite being positioned between two of the fastest growing countries in the world, China and India, its trade with them is negligible. While its world market share has declined over the past 20 years, those of Malaysia, Mexico and Thailand have doubled, and China's has tripled.

Pakistan is well situated between Europe and Asia. Improving logistics, transport and customs can position it to play a major role in both national trade and transit trade. Implementation of the China-Pakistan Economic Corridor must take place, with a parallel effort to normalize trade relations with India.

A key benefit of opening links with neighbors is the impact it can have on the energy sector. Pakistan has a large energy deficit. Trade with neighbors in this sector would be the first step in reducing the deficit.

The benefits of trade in energy, goods and services will be enhanced by a well-performing power sector domestically, and improvements in competitiveness and governance. As a former finance minister myself, I know that the logic of better policies often clashes with entrenched attitudes, vested interests and real or perceived security concerns. It takes tough decision-making and persistence to succeed.

But bold change is possible. Pakistan has already started adopting innovative ways to tackle corruption and improve services. A Citizen Feedback model is being scaled up across Punjab. Users of government services receive a phone call or text message asking them about their experience. So far, some 8 million citizens have been contacted, more than a million have provided feedback, and some 3,000 corrective actions have been taken.

With determination, Pakistan can take full advantage of its location, build dynamism into its economy, unleash the power of women, and defuse the demographic time bomb. As Quaid-e-Azam Mohammad Ali Jinnah said, "With faith, discipline, and selfless devotion to duty, there is nothing worthwhile that you cannot achieve." I think we can all still agree.

This post was originally published in Express Tribune on August 5, 2015.