Witches are tricky. If I say the word "witch" to you, I suspect an immediate image comes to mind. It involves a broomstick, a hat, an ill-tempered feline, and possibly -- if we're feeling uncharitable -- a warty nose. We all know the trappings of witches, their instruments and signifiers. We might have some idea of what witches do, either in their fairy tale incarnation, or in their historical one. But one important detail is missing.

A witch is a woman. 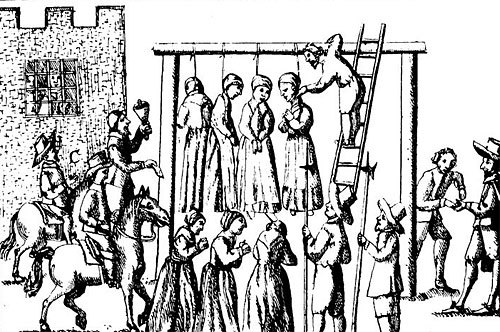 Well, of course she is. Dude witches are wizards, right? Or depending on which edition of the Bible you consult, perhaps they're necromancers, or sorcerers, or readers of times. The relationship between witches and gender has been so ingrained in our popular conception of what a witch is as to be almost invisible. Even within the historiography of witchcraft in North America, the female-ness of witches went largely unremarked until women's studies insisted that the history of gender mattered. But why? Why are witches women?

Actually, this very question obsessed early modern theologians like William Perkins and even King James I, of Bible fame. James in his 1597 witch-hunting treatise Daemonologie took great pains to elucidate what made witchcraft and magic real, rather than the delusion of a fevered mind. (Werewolves, in case you were wondering, are delusions according to King James, which frankly I find something of a relief.) But while theologians might have differed on how witches should be found out, what evidence against them should be counted legitimate, and how best to prosecute them, the gender of witches was not subject to debate.

Early modern witches were thought to have traded their souls to the Devil in exchange for special powers or skills. Often as not those special powers or skills were connected to everyday life, such as the smooth running of household production, or the well-being of children or livestock. After signing the Devil's book, the witch would also be gifted a spirit familiar, which was like a small imp, usually in the form of an animal, which would both do the witch's bidding, but for which she also had to care. It was widely believed at this time that witches suckled their imps on special teats concealed on their bodies, and in fact accused witches routinely had their bodies searched by panels of women enlisted for this purpose. The discovery of a witches' teat on a suspect's body was the only form of what we might today term physical evidence commonly entered during early modern witch trials.

The upended maternal symbolism should be obvious here, particularly when taken together with the fact that early modern witches were generally blamed for maleficium in the household, rather than on a grand, Harry Potterish "good and evil" scale. And the reason for this can be found to some degree in historically contingent definitions of feminine character.

The idea that women are the moral center of a household, responsible for the spiritual and ethical guidance of both children and men, is a stereotype that persists in our own time everywhere from the Mommy Wars to Superbowl commercials. And yet this conception of womanhood as inherently good, as intrinsically less dissolute or dangerous than manhood, is of relatively recent vintage. This gendered idea of female morality didn't become fully codified in American culture until the Victorian period. In the 1600s, the last century of serious witch trials in the West, the popular conception of womanhood was very different. Women during the early modern period were thought to be inherently sinful. As their bodies were generally weaker than men's, so too were their characters. Women's natural state was of lust and wantonness, and they were in constant danger of temptation by the Devil without the sure moral guidance of a father or a husband. Theologians pointed to the example of Adam and Eve to justify this assumption, for it was Eve's moral weakness and temptation into sin that led to the downfall of mankind.

As a result, when the Devil wanted to make trouble in the visible world, he had only to find a woman who was frustrated with her lot in life. Early modern skeptic Reginald Scot wondered in 1584 why it was that so many witches, who were supposed to have extra power and privileges, were instead "old, lame, bleary-eyed, pale, foul and full of wrinkles; poor, sullen, superstitious." Shouldn't witches with the Devil's power at their command be rich? Beautiful? Free from the common suffering of a time of generalized scarcity and no structured systems of poverty relief? But Scot's objections were in vain.

When we think of early modern witch trials we usually reflect on them from the standpoint of scapegoating, as a horrifying example of the extremes to which communities will go when their fear of the Other runs unchecked. But the flip side of that account of witchcraft has to do with power. Witches posed frightening figures because they represented the possibility of women giving in to their base desires, succumbing to their innately sinful natures without apology, and in so doing laying claim to powers that should belong only to God. Witches terrified the early modern mind for the same reason they entice our contemporary one, stalking our novels and television shows, beating on our doors demanding free candy, and shaking the foundations of gendered structures of power as they go.

A little nose wart seems a small price to pay, all told.

Julie Bowen Talks Openly About Her Plastic Surgery: ‘They Do You Like A Sneaker’