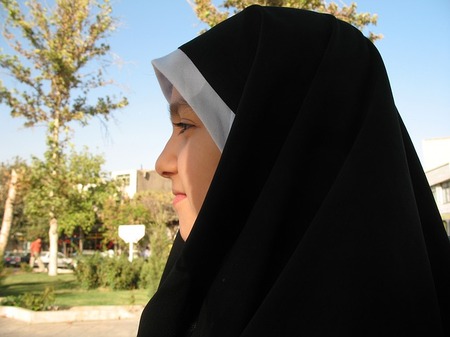 I was raised in a time and place where middle-aged men wolf-whistled at female children on a regular basis. One day, as a friend and I, both aged 12, were jogging together near our homes, two of these Dads made lewd comments about our physical development. Once we were out of range and I had returned from my out-of-body experience, I said to my friend, "Maybe we should get t-shirts that say We're only 12."

How naïve was that? And how sweet I was thinking those poor Dads didn't realize they were harassing children.

This sort of thing happened a lot while I was growing up. I felt humiliated and afraid too often. I'm sure my female friends felt similarly, but we never discussed it. We got flashed by some old guy, and then we carried on with what we were doing: hide-and-seek, tag, jump-rope, and other innocent pastimes.

If you think I'm making this up, then you, my friend, have had a pleasant life so far.

In nations that open their borders to immigrants, there's concern about how to bridge the cultural divide. As a Canadian, I could say something cliché about how we are all, with the exception of our First Nations, immigrants, which is an important subject. But I don't want to talk about that at the moment. I care about rights and justice for our First Nations, and I am pro immigration and proud of Canada's policy of Multiculturalism. I recognize the complexities of maintaining ties to one's culture of origin while striving to survive and develop within the new. For the most part, in most of Canada, immigrants are welcome, and they know it.

However, two recent events related to immigration have converged in my mind: the niqab kerfuffle during Canada's recent federal election, and the horrifying events in Cologne, Germany on New Year's Eve where multiple attacks on women were orchestrated by (mostly) immigrant men. Canada's former prime minister Stephen Harper and Cologne mayor Henriette Reker seem to believe that what a woman wears and how she conducts herself within their respective jurisdictions is their goddamn business. I don't agree.

Immigrants come to us as Muslims, Hindus, Sikhs, atheists, Jews, etc., and once they set foot on Canadian soil, we don't have any business telling them how to worship, vote, work, or dress...unless, and this is where I wish I had a drumroll, unless they are women. And then we get to tell them how to clothe themselves from head to toe, especially if they are Muslim. Stephen Harper's beef about the niqab had to do with his thinking it desirable to force Muslim women to expose their faces whenever and wherever the government commands them to do so. Henriette Reker's beef with the young women of Cologne is that they should have kept men at an "arms length." In other words, their bodies ceased to be theirs if they did not.

You might as well have told me, aged 12, to stay inside where I was safe from predators. And many people do keep female children hidden away. But that doesn't always keep them safe. Does it?

And this is really my point. A woman can wear a burka or she can walk the streets stark naked (or anything in between). It doesn't matter! Her safety cannot be guaranteed in either case. Her safety can't even be guaranteed in her own home. What can be guaranteed is that if and when she is harmed, some people will make public their opinion about how what she was wearing contributed to the crime. And many people will privately wonder the same, including me, because I have been conditioned by the same culture of male dominance and female oppression.

I have nothing profound to say on this subject, and I've been thinking about it all my life. The only conclusion I've come to is this: women have to stick together. And I mean this metaphorically because, as we saw in Cologne, men can physically force women apart. But we don't have to let them force us apart spiritually, emotionally, and politically. The mayor of Cologne can be an example of what we don't want to be for one another: women who put a national agenda (immigration in Germany) ahead of a woman's right to safety, by blaming women for the attacks instead of addressing the issue of acculturated male aggression toward them. (Ironically, Reker herself was stabbed in the neck while campaigning only months ago). The grieving and outraged mothers and grandmothers of the missing and murdered indigenous women in Canada can be examples of what we do want to be for one another. They have not given up on their missing loved ones, nor do they blame them for their fate.

Our daughters need to see us in solidarity, whether we choose to wear a burka or nothing at all. As women, we can choose not to condemn another woman for what she wears, and we can proclaim to the world that we won't do it, ever again. What we wear and why we wear it is our own business because if it isn't our business, whose is it?

I propose that men stand in solidarity, too. I would like to see men check in with one another to make sure that the women around them are not forced to wear male aggression. I, for one, would have no beef with that.