Accounting and business advisory professionals say continued uncertainty is their clients' biggest concern when it comes to the so-called fiscal cliff, according to a recent survey by Sageworks Inc., a financial information company.

More than half of the respondents also said the current uncertainty has already prompted clients to make changes in their businesses. Only a quarter of survey respondents said their clients were not making changes because of this uncertainty. 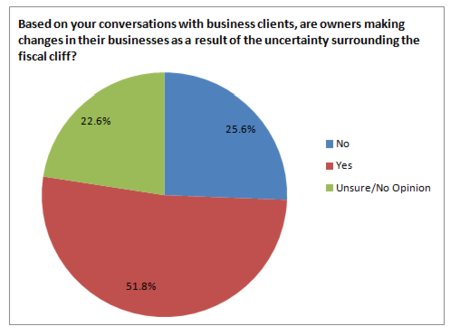 "Private companies operate in extremely risky environments that most of us would not accept," said Sageworks CEO Brian Hamilton. "Business owners already have enough to worry about, and now they're further burdened with how new policies are going to affect their bottom line and discretionary income."

Sageworks conducted the online survey between Dec. 12 and Dec. 18, collecting responses from 164 accountants and business advisors. Respondents were all clients of Sageworks and were not randomly selected. 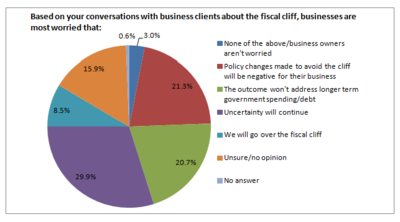 Hamilton said the uncertainty surrounding the fiscal cliff debate adds another layer of complexity to business decisions. While the best plan addressing the fiscal cliff would tackle national debt head on and successfully, any plan would be better than the current stalemate, according to Hamilton.

"You can't expect businesses to plan for their 2013 and 2014 operations when you throw new policies at them on Dec. 31."