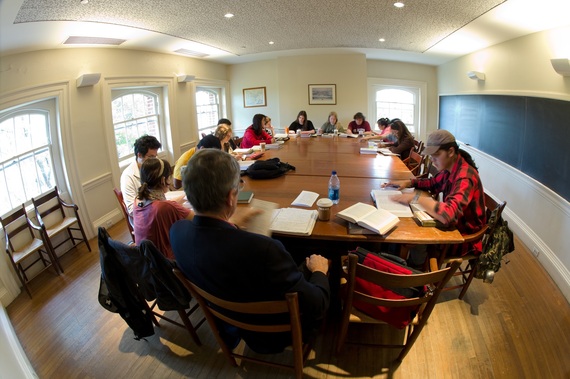 A friend of mine in the financial services industry called me the other day to vent about the poor quality of the public discourse concerning the freedom of the marketplace and the obsession with the Almighty Dollar. "Does it make sense," he asked, "that the pursuit of self-interest is the essence of all human motivation and that any interference with it is immoral? Your students at St. John's College all read Adam Smith, the father of economics. What would he have to say about this?"

Smith, in The Wealth of Nations, wrote two notorious passages that were surely more responsible for this development than he would have desired.

The first was this:

It is not from the benevolence of the butcher, the brewer, or the baker, that we expect our dinner, but from their regard to their own self-interest.

And the second was this:

[The individual] intends only his own gain, and he is in this, as in many other cases, led by an invisible hand to promote an end which was no part of his intention.

These two passages taken together were received by Smith's readers, on the whole, as a new philosophical and moral dispensation. "We can stop worrying so much about others and pursue our private interest," they imagined him to be saying, "because a higher power will somehow make it all turn out for the best." The moral landscape of the west has been littered with self-interest ever since.

The irony is that Smith surely did not mean to produce this effect. He did not believe in unrestrained self-interest as a principle of human behavior, either in public or in private life.

Every man, as long as he does not violate the laws of justice, is left perfectly free to pursue his own interests in his own way, and to bring both his industry and capital into competition with those of any other man, or order of men.

This means that justice is prior to self-interest. No one may legitimately pursue self-interest beyond the point of justice, and this requires both self-restraint and concern for the interests of others.

In regard to private life, Smith was even more categorical. In his other best-selling book, The Theory of Moral Sentiments, he excoriates unrestrained self-interest:

One individual must never prefer himself so much even to any other individual, as to hurt or injure that other, in order to benefit himself, though the benefit to the one should be much greater than the hurt or injury to the other.

Moreover, he makes it abundantly clear that the minimum standard of decent behavior is determined by justice, but the highest standard is determined by benevolence--that is, active concern for the well-being of others:

[H]ence it is that to feel much for others and little for ourselves, that to restrain our selfish, and to indulge our benevolent, affections constitutes the perfection of human nature.

Somehow, the figure of the universally benevolent man seems in some circles to have taken a back seat to the stunted, self-centered homunculus that is today's one-eyed Economic Man.

It takes only a small turn of the imagination to find a better way of living together with others while still retaining a natural concern for our own interest. In Democracy in America, Alexis De Tocqueville, another author read by all St. John's students, offered an image of Americans that we would do well to recapture:

The Americans . . . enjoy explaining almost every act of their lives on the principle of self-interest properly understood. It gives them pleasure to point out how enlightened self-love continually leads them to help one another and disposes them to give part of their time and wealth for the good of the state.

They therefore do not raise objections to men pursuing their interests, but they do all they can to prove that it is in each man's interest to be good.

The Americans of Tocqueville's time found that doing good for others also benefited themselves most of the time. Tocqueville called this "the principle of self-interest rightly understood." If we were to re-adopt this doctrine as a standard of civilized behavior, we would certainly generate less of the gross depravity that arises from the principle of self-interest wrongly understood.