Want to find out how annoying you sound to your Facebook friends? Check out "What Would I Say?" a new site that generates Facebook statuses in your voice.

Created at Princeton University's HackPrinceton 2013 over the weekend, the site puts together pieces of your old Facebook statuses to make new ones that uncannily sound like you. You just log into your Facebook through the site and press "GENERATE STATUS."

You don't have to worry about your privacy being invaded because, as the site explains, your personal information is only ever seen by your own browser and it isn't stored at all.

I'm only moderately upset by what this site taught me about my web presence.

I use a LOT of capital letters. 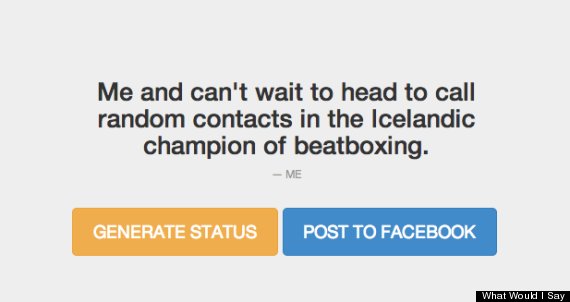 I'd say that sums me up pretty well.

Try it out yourself.

PHOTO GALLERY
5 People You Should Never Friend On Facebook

1 / 6
1. Strangers
You'd think this would be a no-brainer, but, apparently, quite a few Facebook users have no problem adding strangers as friends. According to a study <a href="http://arstechnica.com/tech-policy/2011/11/one-in-five-willing-to-make-facebook-friends-with-complete-strangers/" target="_hplink">released late last year</a>, about one in five users were willing to add a complete stranger as a friend on Facebook. If you'd really like to interact with people you don't actually know without exposing your personal information, consider adding <a href="https://www.facebook.com/about/subscribe" target="_hplink">Facebook's "Subscribe" button</a> to your Timeline; that way, you can let others view your public updates without having to add them as Facebook friends.
Getty