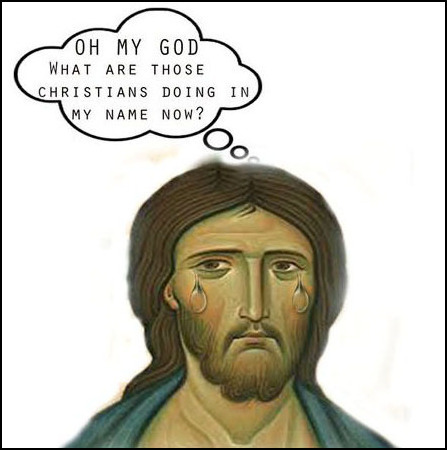 Lament of Jesus by Hugh Colmer with permission

In his New York Times op-ed column on September 4, 2016, Nicholas Kristof asks: "What Religion Would Jesus Belong To?" A clever headline, to be sure, but Kristof has a broader agenda: to explore how all religions, almost from their outset, depart from the teachings of their founders"and continue to do so today.

Kristof tells us that the Prophet Muhammad revered women and elevated their status, in stark contrast to how women are treated in Islamic nations today. He reminds us that Jesus didn't concern himself about abortion or gays, as many contemporary Christians do, but rather that his focus was on compassion for the sick and the poor, and on love and respect for neighbors and enemies.

Yet Kristof says that today many Christian leaders have built their careers on ideologies that don't have the familiar ring of Jesus' teachings. He quotes the bold statement of former pastor Brian D. McLaren, author of The Great Spiritual Migration, that "Our religions often stand for the very opposite of what their founders stood for."

In regard to Judaism, Kristof quotes Rabbi Rick Jacobs, who decries the "obsession" with ritual over "the courage and commitment to shaping a more just and compassionate world."

While Kristof cites Bible illiteracy, the widespread ignorance of the tenets of the Bible, he doesn't address illiteracy itself--the inability to read or limited reading skills. Throughout history, particularly in Islam and Christianity, illiteracy prevented the populaces from reading the words of the Masters. They knew only what they were told by their religious leaders. And what they were told often differed from the genuine teachings. Surprisingly, illiteracy persists today within religions.

According to one estimate, 800 million Muslims out of the total of 1.4 billion are illiterate--"6 out of ten cannot read." A report by the International Islamic News Agency (IINA) estimates that "Nearly 40% of the Muslim world's population are unable read or write."

Throughout the Middle Ages and into the early Renaissance in Europe few people other than the clergy and elites could read. As much as eighty to ninety percent of peasants and other commoners were illiterate. Thus, they could not read the New Testament to discover the Jesus of the Gospels, who lived and died a dedicated Jew. This illiteracy enabled the Church to demonize Jews and incite anti-Semitism.

As I have illustrated extensively, Medieval and Renaissance artworks reinforced anti-Semitism by picturing a totally Christian Jesus with no trace of a connection to his Jewish heritage and identity. For hundreds of years wherever Christians turned--in churches, homes, and other public places--they only saw images of a Christian Jesus devoid of Judaism.

To insure that the populace would know only the Jesus that the Church hierarchy wanted them to know, the Church maintained a policy for a thousand years that forbid individual ownership of the Bible. Sanctioning only Latin for the Bible further distanced the general population from reading it. Primarily the clergy, scholars, and some among the upper class were able to read the Vulgate Latin of the Bible. And anyone who dared translate the Bible into native languages might be burned at the stake. That was the fate of William Tyndale as late as the 16th century (1536 CE), when he translated the New Testament into English.

The lack of access to the words of the religions masters and founders enabled religious leaders to distort the teachings of these towering figures to reflect their own ideologies.

Today the Bible is widely available on the Internet and in hotel rooms. And copies are handed out by devotees on street corners. A huge number of Bibles are purchased. It's a 2.5 billion dollar industry . But how many people are actually reading the "word of God"?

Kenneth Berding, professor of New Testament at Biola's Talbot School of Theology sounds the alarm that "biblical literacy in America is at an all-time low."

A LifeWay research study reported that "over 40 percent of the people attending church are reading their Bibles occasionally--maybe once or twice a month, if at all. In fact, 18 percent of attendees say they never read the Bible." Fifty percent of those interviewed could not name the four Gospels. And forty-two percent did not know that Jesus delivered the Sermon on the Mount.

Contributing to bible illiteracy in her U.S.is the fact, that at least fourteen percent or thirty-two million adult Americans can't read. And the reading level of twenty-one percent is below fifth grade level. Even more shocking, nineteen percent of high school graduates are functionally illiterate. These statistics reported by the U.S. Department of Education and the National Institute of Literacy have held steady for a decade.

Judaism has perhaps sidestepped bible illiteracy, at least for practicing Jews, by a tradition in which successive portions (parshahs) of the Torah (also called "The Old Testament") are read and discussed at weekly religious services. The entire five books of Moses"from Genesis to Deuteronomy" are read aloud over a period of one year every year at Sabbath services.

Within Christianity, the context of illiteracy and Bible illiteracy enables pundits to fashion Jesus in their own image. While Jesus is called the Prince of Peace, the Embodiment of Love, and the Lamb of God, ideologues have re-interpreted the Gospels to transform Jesus into a champion of their ideologies. And even many of those who read the Bible are prone to cherry pick and perceive what they conceive, ignoring contradictions to their preferences.

More recently, conservative Bill O'Reilly, in his book Killing Jesus, gave us the Tea Party Jesus. According to O'Reilly, Jesus, aka Rambo, was inciting rebellion against Roman big government and taxation.

Right-wing groups unhappy with the Jesus of the New Testament have sought to rewrite the Bible because "it's not conservative enough," reports journalist Richard Schiffman. Other conservatives insist that Jesus would be a conservative today despite his pronouncements: "Love your enemies; Blessed are the peacemakers; Sell what you possess and give to the poor; Love your neighbor as yourself; Truly, I say unto you, it will be hard for a rich man to enter the kingdom of heaven," and more.

These same groups ignore the fact that after the crucifixion, the disciples and other followers of Jesus organized their community in accord with strict socialist principles--all their possessions were shared by the community. This is spelled out with no wiggle room for spins or denial in Acts of the Apostles, book five of the New Testament (Acts 4:34-37; Acts 5:1-10).

Perhaps the fundamental flaw underpinning controversies about Jesus and his teachings is our human arrogance. If, indeed, as religions profess, an intelligent force created the universe, that intelligence would be far beyond human intelligence. Even scientists have deciphered only four percent of what the universe is made of, rendering assumptions of divine intentions trivial if not absurd.

With that understanding, our mission on this pebble in an infinite universe might best be served by living peacefully, sharing resources to insure survival and justice for all, and preserving our tiny fragile domicile floating precariously in space.