In the small town of Sanford, North Carolina, a community is watching one of their own, closely.

The fact is, without a kidney transplant, 31-year old Ashley Quiñones will die. Dialysis, which is a viable long-term option for many, isn't an option for her. Though her donor has been cleared and ready to go for the past two years, Medicaid -- Ashley's only insurer -- will not fund the surgery, estimated at $250,000.

Ashley has appealed once and been rejected, though another appeal is on the horizon. But the longer she is required to wait, the darker the outlook.

Several months ago I read Barbara Hannah Grufferman's article reminding women of our power to create positive change. I was inspired by Barbara's words, and the necessity for women to stand up and take action -- to use our energy, our skills, our time, our dollars, our grassroots campaigns -- and our hearts. Oddly, I thought of the Butterfly Effect -- the principle that one seemingly inconsequential act may spark far-reaching consequences.

I was already accustomed to writing daily; I began to write more frequently on health care-related topics.

As a result, Ashley's story came to my attention, and over recent weeks, a growing number of women have been writing about her life. In attempting to put a face on the health care crisis and make it more personal -- because it is personal -- some of these women are crafting Five Year Plans, musing on their futures so that we, in contrast, will imagine not having one.

I believe in service. I believe in the flutter of the butterfly's wings and its extraordinary ripple effects. I believe in each decision to stand up and exert influence -- for the better. I am reminded of this lesson not only by Barbara's call to action, but as I consider Ashley's family, fighting to save her life.

As of mid-November, the Quiñones family had accumulated just over $16,000 toward Ashley's transplant. In the past ten days, burgeoning grassroots efforts combining blogging, Facebook, Twitter, and email have raised another $8,000. It's worth noting that fundraising for Ashley is coordinated through the Children's Organ Transplant Association (COTA), a 501(c)(3) charity dedicated to assisting transplant-needy patients.

In Ashley's case, as encouraging as the latest efforts have been, it isn't enough. Or rather, it isn't fast enough, with more than $200,000 still to go and time closing in.

Ashley was born with Cystic Fibrosis, which is considered a "pre-existing condition" and disqualifies her from purchasing medical insurance at an affordable rate. Medicaid is her only option.

To be clear, Ashley underwent a life-saving double lung transplant in 2001. But the medications she takes to keep her lungs healthy place a tremendous strain on her system -- specifically, her kidneys. Her lungs are showing wear (and a condition known as Bronchial Obliterans Syndrome (BOS)) which is why Medicaid is denying surgical coverage despite her doctors' conviction that she will do well if she gets a kidney soon. In fact, they anticipate another ten years of quality life -- at least. And everything's in place for the procedure -- except the money.

Despite dealing with a lifetime of medical interventions, Ashley works two jobs: one teaching English to non-native speakers at the local community college and another as a developmental aid to a child classified as "severe profound." Known for her sense of humor and adventure, Ashley dreams of using her theater education to help disabled children through drama therapy.

She has no Five Year Plan, yet she does have a vision for her future.

The Giving Time Of Year

As a woman, I am proud to belong to a community of readers and writers who are thoughtful and compassionate. I'm convinced that
we all want to make a difference
-- but we don't always know how.

Here is one way: As you're giving thanks and holiday shopping, consider the Butterfly Effect -- how a small token can change a life -- or save a life. 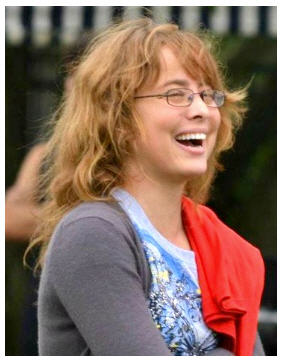 Image of Ashley Quiñones courtesy of Quiñones-Miller family and COTA.org.