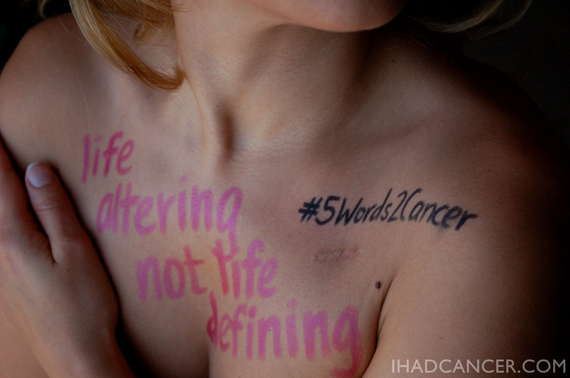 Everyone who meets me knows that I had cancer. If they don't upon first handshake or hug, they will quickly thereafter. Not because of any physical side effect; my scar is barely noticeable and I'm healthier than I ever was before. They know because I talk about it, and I talk about it because it has become part of who I am... and also because it makes them feel uncomfortable.

Why do I want to make people feel uncomfortable? Because the reality is that the topic of cancer is still taboo among the general public, and I want to change that. People outside of the cancer community don't know how to react or what to say to someone who has/had cancer, so often times they say the wrong thing...or nothing at all. I learned this firsthand two years ago when I stood on The Webby Awards stage and announced, "I Had Cancer, Not Cooties" to hundreds of strangers staring up at me. I was met with silence.

To be honest, I cannot blame them for that. When I was diagnosed, I hardly knew what to say to myself, let alone what I wanted other people to say to me. Yes, cancer is an uncomfortable topic, but that's not going to change unless we start talking about it. That's why I created a community called "I Had Cancer," because, although it may be a jarring statement for some, we shouldn't feel the need to hide it. As fighters, we often feel like we lose control of our lives while we're dealing with a diagnosis; it can feel like you don't have cancer, cancer has you. So when we enter remission or better yet, when we are deemed "cancer free", we're surprised to find out that the control doesn't come back immediately and begin to second guess what to say about our experience. When other people ask how we're doing, we think, "should I be happy that I am alive, or upset that I survived and so many others did not?" It's an internal tango that often times leaves survivors feeling more emotional after treatment ends than they ever were during, and stifles our voices that were once so loud and clear.

That's why I've made it my goal to help others express their feelings and find their voice again through the #5words2cancer campaign. It was inspired by The Webby Award's five-word acceptance speech, but has turned into something much larger than I ever expected. By asking survivors, fighters and their supporters what they would say to cancer in five words, we have activated a unified sense of empowerment within the cancer community. Not only does it allow you to succinctly express your feelings, but it serves as a way to get into the minds of other survivors, fighters and supporters. Unintentionally, we have given a voice, and a face, to the cancer journey.

This year, IHadCancer.com is up for a Webby nomination again. If we win, I will not let the crowd's silence make me uncomfortable, because through the #5words2cancer campaign I have learned that there is no such thing as "outside of the cancer community." I won't be standing on a stage staring at hundreds of strangers, I'll be standing on a stage staring at hundreds of survivors, fighters and supporters -- whether currently or in the future. That's also why I'm not picking my own acceptance speech -- I want to be your voice. Share your #5words2cancer on Twitter or Facebook by 4/22 and yours could be the very five words that I say if we win (don't worry, we'll be bringing you to NYC to join us at the awards too!)

The more we come out and make our feelings known, the more comfortable, accepting, and understanding others will be.

So, what are your five words to cancer?

More:
healthy livingcancer diagnosiscancer HealthGeneration Why
Newsletter Sign Up
The essential guide to taking care of your mind and body
Subscribe to HuffPost’s wellness email
Successfully Subscribed!
Wellness delivered to your inbox