We sat down in a small, tidy office in the David Rittenhouse Laboratory overlooking a rainy 33rd Street, our Philly food truck falafels and dripping coats in hand. If I hadn't been aware that I was meeting with a leading physicist from what is arguably the most important research collaboration of our time, I might've mistaken the situation for a lunch study session at my high school back home. 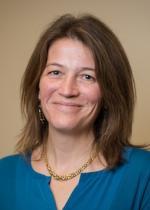 Professor Laura Cadonati, the chair of the Data Analysis Council for the Laser Interferometer Gravitational-Wave Observatory (LIGO) and a professor at the Georgia Institute of Technology, had agreed to meet with me before she was to give a presentation at the University of Pennsylvania on April 7th.

Let's face it: I didn't deserve this. I, a 17 year-old high school junior from a small town in rural Pennsylvania, had the opportunity to speak with an influential scientist who was behind the scenes of a discovery that will forever change the way in which humans view the universe. And, as it had been less than two months since the gravitational wave announcement at the time of our meeting, Professor Cadonati already had her hands full. Throughout the previous week, she had been traveling on a circuit to deliver speeches, attend conferences, and discuss her work with prestigious university leaders and field experts along the East Coast, and she had a tight schedule during her entire stay at Penn. So why me? Why was I, an interested but green physics student, the one who was awarded time with Cadonati when others (frankly, more qualified others) weren't so fortunate? Perhaps because the university wanted to encourage teens to visit their laboratories, or because I had already written about the LIGO discovery in a previous article. But throughout my time with Professor Cadonati, it became evident that there was a much more profound reason why I was munching on Middle Eastern street-cart food and talking about tiny ripples in spacetime in Penn's blocky science building.

Professor Cadonati admitted that while she loved to solve problems, she initially had a hard time understanding physics. It was only in college, once she had the tools to succeed, that she really fell in love with the subject. This felt like a Michael-Jordan-not-making-the-junior-high-basketball-team moment, or a Beatles-not-getting-signed-by-a-record-label story. Hear that, physics-hating high school students? You may be the next scientist to prove Einstein right!

Since then, Cadonati has spent her entire academic career chasing the impossible at the forefront of her field. She initially worked on the Borexino detector at the Laboratori Nazionali del Gran Sasso in central Italy, where she searched for the elusive solar neutrino particle. Cadonati explained that after graduate school at Princeton University, she joined the LIGO team as a postdoctoral scientist at the Massachusetts Institute of Technology. She then came to lead the Data Analysis Council after becoming highly specialized within the LIGO collaboration. Here's what she might've said: A new particle? That's nothing! Let's beat Einstein! And thus Cadonati began her search for the next big "maybe someday" in science: gravitational waves.

Gravitational waves are ripples in the fabric of spacetime that occur when massive objects release energy. Cadonati practically lit up when she described them; the excitement in her voice was almost tangible as she explained that they're like a rich combination of sight (though we can't see them with naked eyes), sound (though we can't hear them directly), and touch (though we can't feel them without ridiculously sensitive equipment). This odd mix of conceptual simplicity and experimental inaccessibility is perhaps what makes gravitational waves so enticing to both accomplished physicists and science enthusiasts alike. Because the waves are so inexplicably tiny, the LIGO experiment required over 30 years of development and testing to detect their effects on Earth.

In September of 2015, after years of painstaking work and exhaustive calculation, the LIGO team received a gravitational wave signal that would forever change the field of physics. And yet, no one seemed to believe it. The Data Analysis Council thought that the signal had been the work of the Blind Injection Program, a group of three scientists who were to secretly "jiggle" the detection mirrors to inject a false signal into the data as a "practice run." Everyone thought that the detection was just a test, or that someone had been messing with the scientists. But after a CSI-like search of the facilities, it was clear to the LIGO team that no one had moved the mirrors. With the combination of this thorough search and the clarity of the detected signal, the team was convinced that it had seen the first gravitational wave, though the Data Analysis Council conducted over five months of testing to be absolutely certain (Imagine this awkward situation: "We discovered gravitational waves... Just kidding!").

Cadonati explained that LIGO data analysts shifted strings of data over 30 million times to create what simulated 600 thousand years of background information for the detection. This test allowed the physicists to know that what they had viewed was definitely a gravitational wave, and not just a random event. After their work was peer-reviewed (checked by other knowledgeable scientists), the LIGO team was ready to release the ground-breaking (or perhaps spacetime-rippling would be more accurate?) news.

Cadonati admitted that it wasn't until she had journalists and paparazzi lying across her feet in the front row of the National Science Foundation Press Conference that the enormity of the discovery hit her. She conceded that the atmosphere of the much-anticipated release was overwhelming, explaining that the team had been wrapped up in preparation until that day. Cadonati was shocked by the media's response. "There was an overflow room; many of the scientists couldn't even get in."

She described the emotion in the conference room as "dense," especially as LIGO cofounders Kip Thorne and Rainer Weiss embraced. To Cadonati, this represented much of what LIGO had accomplished. When she first met Weiss at MIT, she loved that he and the team were so excited about the experiment. She also appreciated the richness brought forth by the dynamic LIGO collaboration, which includes around 1,000 specialized scientists. It was this diversity of expertise and ideas that Cadonati felt led to the discovery.

But most important to Cadonati was the passion behind the entire endeavor. It was evident that LIGO was driven by what she called "the quest for understanding the universe," by the intense thirst for discovery and for a legacy equivalent to that of Galileo or DaVinci. Cadonati beamed at me when she explained that the team had created an experiment that employed feats of engineering, data analysis, and theory, and had taken the power of minds from Einstein to Thorne to solve such an immense problem.
_________

Looking back on my meeting with Professor Laura Cadonati, I can see that it wasn't the laboratories or my previous article that led me to Penn that drizzly day. It was the same passion that transformed the dreams of Einstein into the reality of LIGO three decades ago. It was the need to share something so much bigger than all of us. It was the hunger to discover, to teach, and to learn. And it's infectious.

The author would like to thank David Sliski at the University of Pennsylvania for arranging her meeting with Professor Laura Cadonati.