I met Todd Miller after a friend told me about the amazing work he was doing on the issue of immigration, borders and the people who guard them. My parents are immigrants who escaped the Olde Country in search of the American Dream, and this has colored who I am, how I think of myself and how I view America. So when his book Border Patrol Nation: Dispatches from the Front Lines of Homeland Security came out, I thought I'd ask him to give America the skinny on what's really happening on our borders.

David Henry Sterry: You've either lived or worked near international borders your whole life. You grew up on the U.S. border with Canada and have been reporting from the U.S. border with Mexico for more than a decade. What are your observations and what should people know about our borders? 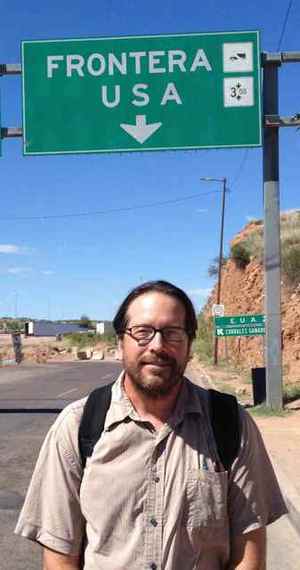 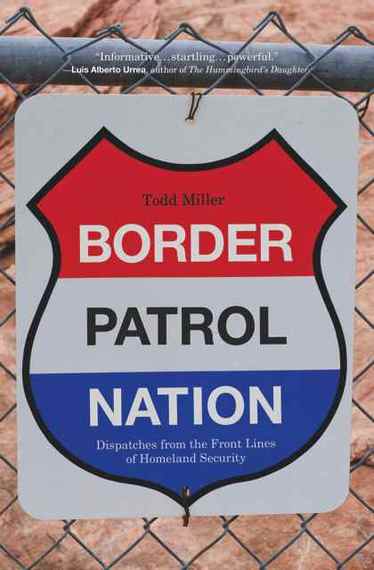 Todd Miller: There isn't a better time than right now to discuss this. Immigration reform proposals are floating around Congress, and there isn't one that doesn't include a multi-billion dollar package to bolster border policing in the south, the north, possibly on the coasts, and definitely in the Caribbean. Since 9/11, more than $100 billion went into a border enforcement apparatus that now seems to be growing for the sake of growth. The budget for border and immigration enforcement, and their law enforcement agencies, are higher than all other federal law enforcement agencies combined, including the DEA and the FBI. Long gone are the days of orange cones on the bridges at night between Canada and the United States, or chain link fences along the U.S.-Mexico border. Mexican border communities with significant familial, political, and economic ties look like deranged versions of what they were even as little as two decades ago. Twenty-foot walls scar the landscapes, mounted cameras peer into Mexico, and stadium lights blind people at night. Armed Border Patrol agents stand behind these huge obstructions, eyeing Mexico and sometimes shooting and killing innocent people. A manufactured war zone has been created where there isn't a war.

DHS: In Border Patrol Nation, you give many detailed examples and stories about how the military style and culture of policing the border is no longer limited to the border itself. What's going on? Are U.S. Border Patrol really all over the country, and not just at the borders? Can you provide examples?

TM: One of the best examples of this is the Border Patrol presence set up to protect the Super Bowl, which has been conducted for the past 10 years no matter if the game is located in Indianapolis or Dallas. A typical operation will include uniformed agents going to train and bus stations in the game's area, asking people for their citizenship status. This is one example of many of the agency's post-9/11 expansion into places where it has never been before, having a jurisdiction of 100 miles from any international border -- including coastline -- into the interior of the United States. This covers an area where two-thirds of the population lives. They are now in other surprising places like Erie, Pennsylvania, Cleveland, Ohio, or Port Townsend, Washington. Since September 11, 2001, Border Patrol has more than doubled its ranks, and is clearly advancing into the interior. Collaboration between these Homeland Security agencies and local police forces (more than 650,000 nationwide) have brought the type of targeted policing into the interior at an alarming rate.

DHS: In Border Patrol Nation you describe the booming business that has exploded around the U.S. Border Patrol. Is this really a growth industry? Explain.

TM: The Border Patrol and the border enforcement apparatus it represents has become big business, and is a growth industry by all prognostications of the market. Companies big and small are flocking to this global industry projected to be worth roughly $20 billion in 2013. And that scratches the surface of what we are talking about. Another projection sees the global homeland security and emergency management industry at well above $544 billion by 2018 if you count "the threat of cross-border terrorism, cyber crime, piracy, drug trade, human trafficking, internal dissent, and separatist movements that have been a driving factor for the homeland security market." As we discuss immigration reform, the profit-motive behind border security is perhaps one of the biggest ignored issues.

DHS: Doesn't increased surveillance, policing and expulsion of people who are here illegally just make us safer? What's not to like about a safer country?

TM: I would argue that it makes us less safe and less secure. If Vermont Senator Patrick Leahy can be ordered out of his car at a Border Patrol checkpoint, then what does that say about the erosion of civil liberties? And if a law-abiding Islamic Studies student can have his laptop confiscated, what does that tell us about freedom of expression? If a U.S. citizen of Puerto Rican descent can be deported to Mexico, and then Honduras--countries where he had never been before -- what does that tell us about the racialized nature of this type of surveillance and policing? And if officials hem and haw to tell us how many "terrorists" they've caught at the border, how much safer does it make us when the majority of people crossing are simply looking for a job? As a sales representative from a military surveillance company told me, "we are bringing the battlefield to the border." If these "battlefields" are moving to our neighborhoods, as the notion of the border continually expands, how can we say it's safer?

DHS: Not everyone agrees with the aggressive treatment of people based on their residency status. There have been flare-ups where ordinary citizens are mobilizing against police actions. What's been going on?

TM: In Tucson, where I live, some truly remarkable actions have been happening. In one case roughly 100 people formed a human wall around a Border Patrol vehicle so it couldn't take away two fathers of small children, who agents had arrested under suspicion of not having correct documents. Two days later activists stopped deportation busses in transit, and locked themselves to the vehicles, including its tires, to draw attention to a hungry deportation machine. People are starting to put their bodies on the line in what is, perhaps, the United State's newest civil rights movement. Undocumented youth, who grew up in the United States, are appearing at U.S. ports of entry in graduation robes and demanding that they be reunited with their families. They do this at great risk: incarceration and permanent banishment from the country.

Todd Miller is the author of Border Patrol Nation: Dispatches from the Front Lines of Homeland Security, just published by City Lights.

David Henry Sterry is the author of 16 books, a performer, muckraker, educator, activist, editor and book doctor. His anthology was featured on the front cover of the Sunday New York Times Book Review. His first memoir, Chicken, was an international bestseller and has been translated into 10 languages. He co-authored The Essential Guide to Getting Your Book Published with his current wife, and co-founded The Book Doctors, who have toured the country from Cape Cod to Rural Alaska, Hollywood to Brooklyn, Wichita to Washington helping writers. He is a finalist for the Henry Miller Award. He has appeared on National Public Radio, in the London Times, Playboy, the Washington Post and the Wall St. Journal. He loves any sport with balls, and his girls. www.davidhenrysterry