Let's start with the problem. The problem today is obesity and diabetes are on the rise. The Centers for Disease Control and Prevention estimates that about one-third of American adults are obese. The American Diabetes Association estimates that 29.1 million Americans have diabetes and 86 million Americans ages 20+ have pre-diabetes. What's more, metabolic syndrome affects about one in three U.S. adults, according to a JAMA Study published in May 2015.

Why is this happening? In one word, our food. In two words, processed foods.

Food makers have adopted processed production methods over the last 30 years and consumers have welcomed them with open arms. Processed foods are packaged -- be it boxed, bagged, canned or jarred -- and processed using methods like dehydration, refrigeration, freezing and canning. If there's a laundry list of ingredients on the back of the packaging, rest assured it's been processed. Processed foods have to make up for a loss of nutrients. How do they do this? Healthy nutrients are replaced with synthetic vitamins and minerals to "enhance" the nutritional value of the food.

As a result, our taste buds become acclimated to the incredibly strong flavors of processed foods and even further, increase our cravings for more salt and sugar on whole or raw foods.

This leaves us to where we are today. We really don't know how to eat healthy or even where to begin. The truth is we barely understand the foods we eat and we don't invest enough time to learn. The book Fast Food Nation by Eric Schlosser brought to light many of the facts about fast food and processed food and according to his research, about 90 percent of the average American's budget is allocated towards processed foods.

Why We Eat Processed Foods
Convenience seems to be the major reason for the high consumption of processed foods. The problem has surmounted to be about time. Who has hours upon hours to spend in the grocery store aisle analyzing nutritional labels, ingredient lists and Googling what they are, to then return home, prepare a meal without a lot of additives and actually enjoy the meal they end up with? The culture of food in America has changed in the last 30 years and we need to reverse it.

Eating a diet high in processed foods has been shown to lead to diabetes, according to a PNAS study from 2012, and liver disease, not to mention these foods increase cholesterol and blood pressure -- all proponents of heart disease.

Did you know the FDA doesn't require food makers to disclose every ingredient or additive, for consideration and full review, if the manufacturer deems the ingredient GRAS (Generally Regarded As Safe), a 57-year-old regulatory law from the FDA. This means if this standard is "met" or "claimed," food makers get away scot-free from the FDA, especially if no immediate evidence exists proving the harm of the ingredient. Some synthetic chemicals injected into processed foods are known to have carcinogenic properties, promoting the development of cancer. The World Health Organization believes processed foods are to blame for the spike in obesity levels and chronic disease globally. 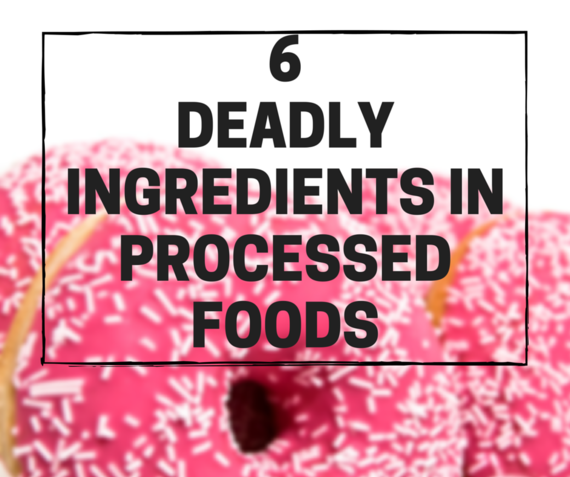 High Fructose Corn Syrup
High fructose corn syrup is a common sweetener added to sodas, fruit-flavored drinks, breakfast cereals, cookies, cakes and salad dressings. There are many differing opinions on understanding if the body metabolizes HFCS in the same way it does regular white sugar. Regardless, too much of this additive can contribute to unwanted calories that have been linked to weight gain, Type 2 diabetes, metabolic syndrome and high triglyceride levels, which all can boost the risk of heart disease, obesity, cancer, dementia and liver failure. A significant 2014 study published in the journal JAMA Internal Medicine showed that eating too much added sugar may raise the risk of dying from heart disease, even if you aren't overweight.

Refined White Flour
When flour is refined, about 14 vitamins, 10 minerals and proteins are cut from the natural state of the product. Sometimes you'll see "enriched white flour" in the ingredient list. Don't be deceived, this only adds about four vitamins to the product. White flour is chemically bleached and leaves behind a residue that is consumed. These chemical residues are also what help to develop gluten, which some people suffer allergies towards. Bleached white flour can be found in breakfast cereals, pasta, pizza, baked goods and breads. In order to process these refined foods, the body actually pulls the vitamins, minerals and enzymes consumed from healthy food sources out of the organs, tissues and bones. A diet rooted in eating foods with white flour can also lead to chronic fatigue syndrome. Refined white flour also has a higher glycemic index -- a measurement of how fast sugar is released in the blood -- which at a level of 100 means sugar is being released faster and in a greater amount, leading to Hyperglycemia. On a simpler note, once all of this stripped away, white flour is a starch and your body is likely to store these refined carbohydrates as fat, contributing to obesity. Look for "enriched flours" or "refined flours" on the packaging; this indicates white, bleached flour.

Refined Sugar
Ahh, refined sugar or commonly known as white (granulated) sugar, perhaps the most deadly ingredient on this list. It's nearly impossible to remove sugar completely from our diet, since it's naturally found in most foods. But refined sugars can directly impact an individual's risk for obesity and other chronic diseases like diabetes and heart disease. These sugars can be found in almost every processed food from baked foods, to boxed macaroni and cheese. The average American consumes approximately one-third of a pound of sugar each day, translating into nearly 130 pounds of sugar per person every year.

Artificial Sweeteners
Think Splenda, Sweet n' Low or Equal, more substantial evidence has been uncovered about the harms of artificial sweeteners in the last five years than ever before. Earlier this year, PepsiCo announced they would no longer use aspartame in their Diet Pepsi product. Aspartame, a popular artificial sweetener, has long been a controversial ingredient, even though the FDA claims it's one of the most thoroughly tested and studied food additives. Well, a number of studies have shown that aspartame in particular along with other sweeteners are linked to some of the most debilitating diseases including heart attacks, strokes, hypertension, cancer, obesity, Type 2 diabetes and metabolic syndrome. Over 6,000 food and drink products contain it, often hidden under labels marked "diet" or "sugar-free." Even with substantial evidence, artificial sweeteners remain popular among dieters and even diabetic patients looking for a sweet fix. But research speculates that when we consume sugar substitutes, the body expects to see a surge in glucose and when this expectation is not met, we continue to crave sweets, consuming food until the craving is met.

Synthetic Trans Fats
Last week, the FDA announced a three-year deadline for all food makers to eliminate synthetic trans-fat or "partially hydrogenated oils" from their products. These oils are the key source of trans fatty acids in the American diet. As a result, medical experts are rejoicing since major bodies of evidence exist that show an increased risk of heart attack, stroke and cancer from heavy consumption of these fats. According to the Center for Disease Control and Prevention,trans fats are found naturally in animal fats but PHOs are found in baked goods. Food makers have used these for many years because they're inexpensive and extend the food's shelf life. The problem? Artificial trans fat raise low-density lipoprotein or LDL (the bad cholesterol), which is a major risk factor for coronary heart disease, the number one cause of death in America. The CDC projects eliminating these fats could prevent 20,000 heart attacks and 7,000 deaths per year.

MSG
Topping the charts of dangerous additives is MSG or monosodium glutamate. The good news is many studies have been done on its effect on the body. This additive is not just in your Chinese food, but added to thousands of the foods you eat, especially prevalent in processed foods. MSG overstimulates our nervous system, exciting the nerves, causing inflammation -- a massive proponent for cancer. One 2013 study showed rats who ate MSG experienced a 40 percent increase in their appetite. In 2011, researchers at the University of North Carolina found that both men and women who ate the most MSG (an average of 5 grams per day) were 30 percent more likely to become overweight.

Our food culture in America needs a lot of reform. Bottom line, we need to spend more time on educating ourselves about the ingredients in our foods. In a perfect world, processed foods would be cut from our diet completely, but it's not that simple. Who loves dining out? We all do and how do we know what in those foods? Many questions remain along with differing opinions, but one fact remains, these six ingredients among thousands of others are not natural. They're designed to withstand long periods of time on a shelf regardless of temperature; how can we expect our bodies to break them down? We can't. Ask more questions when it comes to the foods on your grocery list. When you're about to eat that cracker or cookie, ask yourself, "What's in this?" and "Do I need it?" Be your own advocate when it comes to the food choices you make.