Oprah Winfrey, Michelle Obama, Ambassador Andrew Young and other notables gathered at Washington, D.C.'s Warner Theatre on April 7 to celebrate the United States Postal Service's unveiling of the new Maya Angelou "Forever" stamp. The stamp features a portrait of the late American poet along with the words, "A bird doesn't sing because it has an answer, it sings because it has a song."

Even before the ceremony's distinguished speakers had a chance to honor Angelou's legacy with a namesake stamp, reporters went into detective mode to find out if the quote actually belonged to her. Although the saying used on the stamp loosely references Angelou's 1969 autobiography, I Know Why the Caged Bird Sings, the Internet wasn't so sure of its origins.

Did Maya Angelou say the words on the stamp?

Yes and no. A day before the D.C. event, The Washington Post attributed the quote to children's author and illustrator Joan Walsh Anglund (the words appear in her 1967 book of poems, "A Cup of Sun"); next, The New Yorker reported that the quote is also a derivative of a Chinese proverb; and lastly, Slate revealed that a 2013 blog post and recording the USPS used in its research features Angelou stating the quote to an interviewer as if the words were her own.

Anglund told the Post the mix-up didn't upset her. And with "Maya Forever" stamps already on sale at post offices around the country, it's unlikely the quote will disappear in the near future, no matter who wrote or said it. On the bright side, the portrait of Angelou on the stamp is here to stay.

In all the fuss over the quote, the stamp's amazingly lifelike image of the smiling poet and author has been underappreciated. The portrait is in the hyperrealistic style and could be mistaken for a fine art photograph. The painting, a four-feet-by-four-feet original canvas of Angelou's face by artist Ross Rossin, will hang at the Smithsonian National Portrait Gallery's collection in Washington through November 1, 2015.

Rossin was born in Bulgaria, now lives in Atlanta and paints portraits of cultural heroes such as political leaders, writers and actors - all of whom share a passion for social justice issues. Several of his works are featured in the galleries of the Center for Civil and Human Rights. Rossin has created portraits of Jimmy Carter, Nelson Mandela, Mahatma Gandhi and others. He works from live sittings, photos and memory.

Prior to painting the Angelou portrait a year before her 2014 death, he visited the poet in her Winston-Salem, North Carolina home.

Rossin recalls his Angelou encounter as one of his favorite days.

"We met on her 85th birthday, on April 4, 2013," the painter says of Angelou. "I went to her home and we spent a full afternoon together. It was quite special just being in her presence. She held my hand. When you're near a spirit like hers, it gives dimension to everything she's done and created."

Of his photo-realist method, the artist says:

"My work is oil on canvas with classical technique. There's no particular trick or secret to it, except that I've done it for 45 years. I meet someone, we spend some time together, I take some pictures and then a few months later I go back and present the portrait. I also bring my own experiences of glorious moments, disappointments, depression, dreaming, changing countries, social systems, political systems and continents. It all adds up to the 'secret sauce.'"

About his famous faces of the 20th and 21st centuries, Rossin believes the portraits have a unique quality beyond the physical similarity to their subjects:

"The paintings carry a certain energy and a message, so that generations to come will look at one face or another and think, 'Those were truly amazing human beings back then.' It's more than photographic likeness, it's souls." 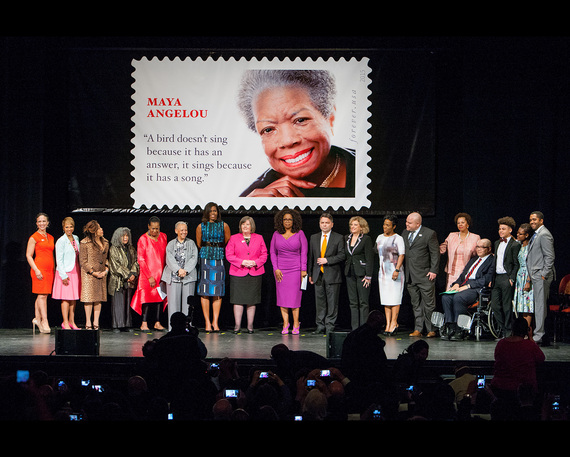 Ross Rossin (with yellow tie, standing next to Oprah Winfrey) with guests at the #MayaForever stamp ceremony on April 7. Photo courtesy of USPS.com.