Since Indiana passed a new "Religious Freedom Restoration Act," (RFRA) the state and Governor Mike Pence have taken a lot of heat for it as a "license to discriminate." Saturday Night Live has lampooned the new law, celebrities have called out the state, the twitter hashtag #BoycottIndiana is trending and businesses are refusing to invest in operations and facilities there.

Opponents of the bill call it a license to discriminate.

Supporters, however, note that 19 other states have passed RFRAs without people getting upset and calling for boycotts. They also point out that Bill Clinton and other Democrats overwhelmingly supported the federal RFRA law in 1993. They portray opposition to Indiana's RFRA as hypocritical and hyperbolic.

There is a lot of confusion and misinformation floating around on both sides, though. So, here are some things you should know about the Indiana RFRA.

Why does this bill have people so upset?

It is a combination of timing, purpose and what's in the bill.

The law itself is also pretty clearly designed to allow discrimination against LGBT people. This has been a big issue with opponents of marriage equality and the religious right, who constantly tell "horror" stories of photographers, florists and bakers who were fined for refusing to serve gay couples getting married. The bill's supporters clearly meant to target LGBT people, and it didn't help that Governor Pence's surrounded himself with anti-LGBT activists when he signed the bill. 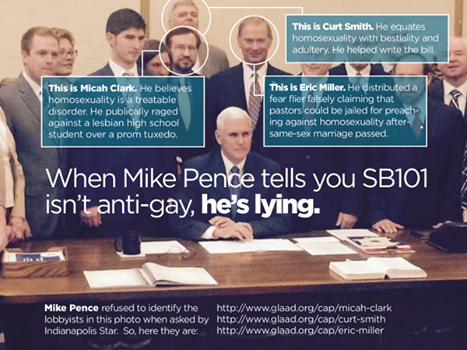 This bill itself also greatly expands RFRA protections beyond what was in the original 1993 federal RFRA. When the federal RFRA was passed, it was intended for things like allowing Muslim prisoners have neatly trimmed beards, or Churches to distribute food to the homeless in parks.

How is Indiana's RFRA different from all the other RFRAs?

When Politifact examined whether the Illinois RFRA that President Obama voted for in 1998 was the same as the one in Indiana in 2015, they concluded that, "the language isn't the "very same," and the claim is not as simple as lining up one vote next to the other and declaring them equal, experts told us."

Legal Professor Tobias Barrington Wolff provides a concise description of how the Indiana RFRA is substantially different from others in three ways:

- There is no accountability. The Indiana law expressly provides that people can claim a special religious exemption to any law, regardless of whether the religious objection involves a tenet that is central to their faith, and regardless of whether their objection involves a matter that their religious actually compels. There is no accountability concerning the legitimacy of that claim so long as the person making the claim is sincere.

- Corporations are given special rights. The Indiana law expressly confers these special religious rights on corporations and other for-profit businesses, so long as there are individuals who have "control and substantial ownership" of those businesses and who assert the religious objection.

Additionally, Lambda Legal points out that Indiana's RFRA is different in that "(it) is so broadly written that someone can sue even without their religious beliefs having actually been burdened simply by claiming that is "likely" to happen."

Why were these changes made?

In the past, when people refused services to LGBT people and ran afoul of local and state level civil rights protections as a result, the defendants (those who refused service) usually lost. The courts generally have ruled that state RFRAs do not protect you from violating civil rights laws. The language in the Indiana RFRA is designed to maximize the chances that such a defense will succeed.

Using RFRA as a defense for anti-LGBT discrimination could only happen in the few places in Indiana where there are LGBT inclusive non-discrimination laws in place. Everywhere else in the state it is perfectly legal to refuse service, fire or deny housing to LGBT people. It is also worth noting that transgender people have less protections in Indiana than most states. The controlling case law in the 7th Circuit rejects transgender people having protections under Title VII of the 1964 Civil Rights Act.

Can someone use the Indiana RFRA to discriminate against Christians or other minorities?

Could this law be overturned in court because it was motivated by animus towards LGBT people?

Every expert I consulted said there is no chance Indiana's RFRA will be overturned on the basis of animus.

Will the Indiana RFRA be a license to discriminate?

Maybe. Courts will have to look at individual cases, and decide if non-discrimination ordinances protecting LGBT people are a compelling enough governmental interest to override RFRA. The new language in Indiana's RFRA makes the outcome uncertain. Other conservative states are watching this closely, and are likely to expand the language of their own RFRAs if Indiana's succeeds in overriding local non-discrimination ordinances in court.

How can we ensure RFRAs aren't used to discriminate against LGBT people?

Lambda Legal and Freedom Indiana have suggested similar ways to ensure RFRAs are not used as a legal excuse for discrimination:

1. Pass a law to include gay and transgender people within Indiana's existing statewide nondiscrimination rules.

2. Add this language to the new religion law: "This chapter does not establish or eliminate a defense to a claim under any federal, state or local law protecting civil rights or preventing discrimination."

When legislators in Georgia added similar language barring discrimination in their own RFRA expansion, the bill quickly stalled in committee. This was widely seen as an admission that the bill really was mostly about a right to discriminate against LGBT people, and less about religious freedom in general.

Indiana's Governor Pence says discrimination isn't an "Indiana value," but has also has indicated he will not support state laws legally protecting LGBT people from discrimination, nor will he propose adding non-discrimination language to the new RFRA.

If the Governor is being truthful when he says that he opposes all forms of discrimination, then this proposal is the answer: extend the same protection against unfair treatment to all Hoosiers, and make clear that religion should never be used as a license to discriminate. If Governor Pence refuses, then the business community will have its answer.

What do we do about places that pass these expanded RFRA's anyway?

Many legislators are lukewarm supporters of expanded RFRAs to begin with. When RFRAs cost states millions of dollars in revenue, and thousands of jobs are lost, support drops substantially. Several votes in Georgia swung against the RFRA there after the Georgia Convention Bureau sent a letter informing them the state would lose up to $15 million in revenue if the bill passed.

Keeping up pressure on businesses on social media to not do business in states where legislatures make it clear LGBT people aren't wanted has been effective. It was sufficient in 2014 for the NFL to threaten to take away the Super Bowl, which led to then Governor Jan Brewer to veto the RFRA expansion bill.

If nothing else, even if Indiana doesn't repeal or amend their RFRA, the financial consequences of their decision will certainly make other state legislatures think long and hard whether promoting discrimination is worth the price.