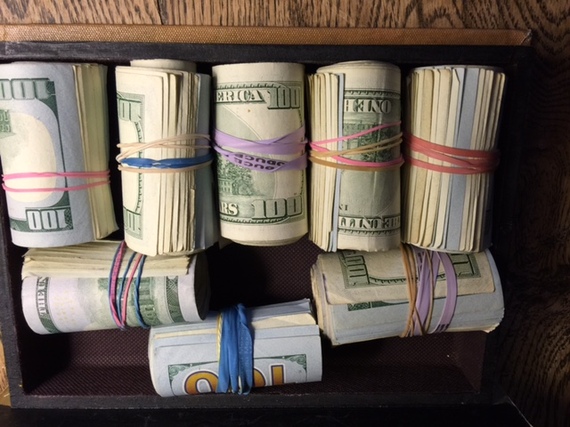 Money is a metaphor

It's a metaphor for attention. An imitation of success.

Money fills the void when self esteem crumbles and it is where confidence answers to competence.

Money is a metaphor for beauty, height and intelligence.

Money is a metaphor for power, immortality and value.

Without metaphor money has no value.

Above all money is a game. To play the money game you have to forget that money is a metaphor and convince yourself it is real, necessary and you need more money.

We need a way to measure ourselves. After all we are so small and the universe so big: it is nice to ascribe a number: our personal worth.

Love isn't tangible enough. Happiness is too subjective. Sex is taboo, and unmeasurable, competitive spirituality or morality is ridiculous, so we use money to measure ourselves.

We need an open ended, analog scale to determine where we stand, how good/bad, better/worse we are at what we do: and even who we are.

Money fills in as a subject of thought when we have run out of other subjects to think about. It is sufficiently persistent that it offers us company.

Money is a rough, inaccurate measure. But it is the best we have.

It offers an invitation to discover just what it takes to make it, and you can measure just how much you have.

Money protects and defends, to some degree, from fickle judgements about how good/bad you are.

It is very expensive not to have enough money. It costs you what you want to do, where you would like to eat, that dream vacation and a real glimpse into who you are.

Not having enough money is an extravagance.

Thank you money for all that you do for us.

Many people say "I don't have enough money."

Second step: determine exactly how much money you have.

Third step: have how much you have be enough.

After all, it is obviously enough to sustain life, because you are still breathing. Suggesting that you have the wrong amount of money is to critique what is: and that always leads to suffering.

It is a bit like saying that it sucks to be six feet tall or to have been married twice, both of which, along with how much money I have aren't cosmic mistakes simply facts.

It is your thinking that judges your money and yourself harshly, not your bank balance.

If you complain about not having enough money stop. The thought "not enough money" will cost you dearly when you want a new car or a villa in France.

Steep in the perspective that you have enough money until it flavors your every perception.

But don't fall into the pit of imagining you have more money than you do: that is la la land, a lonely, poor place the money game saves you from visiting.

Lightening up about money

The money game is play not hard work. To relieve yourself of the perception that too little or too much money is a burden do several of the following:

Use money as a book mark or a coaster, do origami with money, and remind yourself often just how much money you have.

Give away 25 two dollar bills at the mall, or wherever you go. I assure you that you will have more than fifty dollars worth of fun. You will also discover who you want to give money to, probably the same people you would like to give love/attention to, or get it from.

Burn the biggest bill you dare.

Hamster some money away: I have eight rubber banded 5,000 dollar rolls nestled in a fake book on my busy book shelf. If I ever think that I don't have any money I open that book.

Gamble, sliding more money into the pot than you can afford, or bask in generosity.

Ask people for money, and find out how begging feels.

Work at a soup kitchen in the morning, visit the fanciest country club around in the afternoon.

Own a Mercedes, or at least test drive one.

Learn that it is quite delicious to give and to receive.

Your game, your way, winning at the money game

You are well on your way to transforming your money outlook when you know your financial worth, you have enough and you are reminded alternately that money is serious business and a game.

Think new thoughts about money and get curious how you can do something you really like to make more money. Expand what you like until you have enough money.

Above all remember that the money game isn't about getting somewhere, it is about enjoying exactly where you are. Enjoy the process of making more money, it will round your rough edges and quiet your mind.

The money game is about learning that it is who you aren't which limits how much money you have and who you are that is already rich.

In a year I made 18,000 dollars and saved 10,000. In another year I made 110,000 and had to borrow money to pay my taxes. The money game isn't predictable, it is endlessly variable and entertaining. It is also fun: and when you experience it as fun the money will follow.

The money game isn't really about money, it is about having the best time you can getting to know yourself and growing up.

Money is Your Friend

Pat the dog, take it for a walk, but remember that it is money that buys dog food, rabies shots, a leash and the shoes you wear while walking the pooch.

When money is your best friend you will enjoy exactly how much money you have. You will use what you have as a creative launching pad to make more.

You will use money as a measure of your maturity, and you will enjoy the act of making money and spending it too.

35 years ago I left the fast paced financial industry and moved to the woods.I write books, lead workshops about living your best life.