The rapid spread of Zika virus through the Americas, together with the association of infection with microcephaly and Guillain-Barré syndrome, have propelled this previously ignored virus into the limelight. What is this virus and where did it come from?

Zika virus was first identified in 1947 in a sentinel monkey that was being used to monitor for the presence of yellow fever virus in the Zika Forest of Uganda. At this time, cell lines were not available for studying viruses, so serum from the febrile monkey was inoculated intracerebrally into mice. All the mice became sick, and the virus isolated from their brains was called Zika virus. The same virus was subsequently isolated from Aedes africanus mosquitoes in the Zika forest.

Serological studies done in the 1950s showed that humans carried antibodies against Zika virus, and the virus was isolated from humans in Nigeria in 1968. Subsequent serological studies revealed evidence of infection in other African countries, including Uganda, Tanzania, Egypt, Central African Republic, Sierra Leone, and Gabon, as well as Asia (India, Malaysia, Philippines, Thailand, Vietnam, Indonesia).

Zika virus moved outside of Africa and Asia in 2007 and 2013 with outbreaks in Yap Island and French Polynesia, respectively. The first cases in the Americas were detected in Brazil in May 2015. The virus circulating in Brazil is an Asian genotype, possibly imported during the World Cup of 2014. As of this writing Zika virus has spread to 23 countries in the Americas. 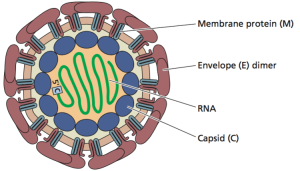 Zika virus is a member of the flavivirus family, which also includes yellow fever virus, dengue virus, Japanese encephalitis virus, and West Nile virus. The genome is a ~10.8 kilobase, positive strand RNA enclosed in a capsid and surrounded by a membrane (illustrated; image copyright ASM Press, 2015). The envelope (E) glycoprotein, embedded in the membrane, allows attachment of the virus particle to the host cell receptor to initiate infection. As for other flaviviruses, antibodies against the E glycoprotein are likely important for protection against infection.

Zika virus is transmitted among humans by mosquito bites. The virus has been found in various mosquitoes of the Aedes genus, including Aedes africanus, Aedes apicoargenteus, Aedes leuteocephalus, Aedes aegypti, Aedes vitattus, and Aedes furcifer. Aedes albopictus was identified as the primary vector for Zika virus transmission in the Gabon outbreak of 2007. Whether there are non-human reservoirs for Zika virus has not been established.

Most individuals infected with Zika virus experience mild or no symptoms. About 25 percent of infected people develop symptoms 2-10 days after infection, including rash, fever, joint pain, red eyes, and headache. Recovery is usually complete and fatalities are rare.

Two conditions associated with Zika virus infection have made the outbreak potentially more serious. The first is development of Guillain-Barré syndrome, which is progressive muscle weakness due to damage of the peripheral nervous system. The association of Guillain-Barré was first noted in French Polynesia during a 2013 outbreak.

Given the serious nature of Guillain-Barré and microcephaly, it is prudent for pregnant women to either avoid travel to areas that are endemic for Zika virus infection, or to take measures to reduce exposure to mosquitoes.

There are currently no antiviral drugs or vaccines that can be used to treat or prevent infection with Zika virus. We do have a safe and effective vaccine against another flavivirus, yellow fever virus. Substituting the gene encoding the yellow fever E glycoprotein with that from Zika virus might be a good approach to quickly making a Zika vaccine. However testing of such a vaccine candidate might require several years.

Mosquito control is the only option for restricting Zika virus infection. Measures such as wearing clothes that cover much of the body, sleeping under a bed net, and making sure that breeding sites for mosquitoes (standing water in pots and used tires) are eliminated. Reducing mosquito populations with insecticides may also help to reduce the risk of infection.

It is not surprising that Zika virus has spread extensively throughout the Americas. This area not only harbors mosquito species that can transmit the virus, but there is little population immunity to infection. Infections are likely to continue in these areas, hence it is important to determine whether or not Zika virus infection has serious consequences.

Recently Zika virus was identified in multiple states, including Texas, New York, and New Jersey, in international travelers returning to the U.S . Such isolations are likely to continue as long as infections occur elsewhere. Whether or not the virus becomes established in the U.S. is a matter of conjecture. West Nile virus, which is spread by culecine mosquitoes, entered the U.S. in 1999 and rapidly spread across the country. In contrast, Dengue virus, which is spread by Aedes mosquitoes, has not become endemic in the U.S.

We recently discussed Zika virus on episode #368 of the science show This Week in Virology. You can be sure that we will revisit this topic very soon.