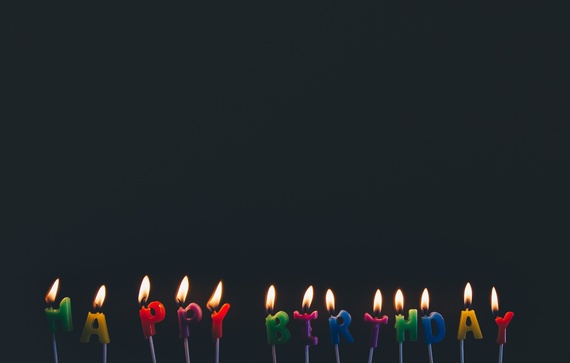 Every time I come upon a birthday party in my house, I start feeling a little anxious. I blame Pinterest.

I'm not trying to be mean. I really like Pinterest, especially when I don't know what's for dinner tonight and my kids are already complaining about what I haven't even decided to cook. Pinterest has helped me find the perfect dessert to take to my family's Christmas party, an unusual teacher gift that will mean much more than a basket of fruit, and my latest haircut, which, just to clear up any confusion about the state of my hair, has not been updated recently.

I know because I did this recently. My son is turning 10, and already we had waited until the last possible minute to plan his birthday party because Husband and I are both entrepreneurs and we've been rebranding a few things and it's just been a little crazy around here. But this is his tenth birthday. This is a big deal. Ten is the time when children's brains start changing, along with their bodies. This is a transitional age. I wanted to make this birthday party special.

This was a big mistake.

I don't make any judgements about people who plan their birthday parties around what Pinterest suggests when you search "Minecraft birthday party," and I know there are people who really, really enjoy this sort of thing. I am not one of them. 3-D tiles on the walls? They would never come down, unless my kids destroyed them, which is highly likely. Twizzlers bundled up with TNT papers tied around them? I don't even like Twizzlers. Cupcakes shaped into a Minecraft sword? Not only am I terrible at anything that has to do with art, I also cannot, for the life of me, figure out food coloring. My colors always end up pastel, not bright. It's probably user error.

So I scrolled down to the less ambitious feed. There it was. "Dirt," which was brownies cut into regular brownie pieces. "Water" labeled water. Brown bags of popcorn labeled "gold."

This I could do.

In the days leading up to the birthday party, I made myself feel really guilty about all of this underachieving, when I'm normally a super-overachiever (which is one step up from overachiever). This was his tenth birthday party. Why hadn't I planned better? Why wasn't I doing more? Why couldn't I hang that Minecraft-piece mural on the back of the wall? Would he remember this tenth birthday as the lamest one ever?

But after the party was over, and I took my grinning boy aside, I realized, not for the first time, that the only things kids really need for a birthday party are family, friends, a handful of games, a photo booth and really tasty treats that may or may not look like Minecraft blocks. Oh, and presents, of course.

Kids see love in a billion different ways. My kids don't really care if they have a cool Minecraft mural on the back wall. They don't care if there are Twizzlers bound up with TNT labels--they'll pop a few of the dirt brownies instead. They don't care that my red icing comes out looking more like pink.

So what do we need to throw a successful kid's party? We just need a relief valve. Take the pressure off. Enjoy that tenth birthday party. You can bet your kid won't even know he missed out on a hand-crafted Minecraft block piñata because you superglued your hand to the box the night before. He'll just munch on his brown bag of gold, hit his twin brother with a homemade Minecraft sword made from Amazon boxes--because there's always an abundance of those--and call it the best birthday party ever.

Voting Made Easy
Register to vote and apply for an absentee ballot today
Register now
More:
birthday partiesPinterestParenting parents-dadsParents
Newsletter Sign Up
Raise the kind of person you'd like to know
Subscribe to our parenting newsletter.
Successfully Subscribed!
Realness delivered to your inbox