Today's social media and networking websites challenge us to describe ourselves in a very brief bio, offering a mere couple hundred characters in which to sum up decades of life. Though nearly an impossible feat, I finally settled upon a few key phrases, choosing to focus on my career as a reality television producer, passion for writing and lifeblood as a mother. Then, I ran out of characters. Let's face it. The rush of today's society can be very limiting in that way.

Still, it was those three descriptions that came to a head yesterday in a way I never expected.

My sister, Jeni Elizabeth, is a very well established personal and network wardrobe stylist in Los Angeles. She has a nearly impeccable reputation both in her career and her life as a mother and step-mother. Her ability to balance a strenuous work schedule with a loving home and two very young children is admirable, to say the least.

That's why when Joel McHale and his team at The Soup took a major stab at her parenting skills, it was impossible for me to stay tight-lipped. Here's how it all went down.

Last week, the Facebook page for E's television show The Soup teased a clip from the daytime talk show The Real, for which my sister is the Lead Stylist. In a brief segment featuring fun products, Jeni walked my 8-month-old nephew, Tyler, out onto the stage wearing a soft onesie with a mop on the front of it. When placing him down to crawl, he cried. Not a shocker.

Within moments, the clip had been viewed thousands of times and hundreds of faceless strangers began lashing out against her. Later, when The Soup aired on national television, host Joel McHale's guest, actor Will Arnett, introduced a revolutionary (fake) product inspired by my nephew, called "Baby Attached to the End of a Weed Whacker." At that point she made the decision to temporarily shut down her personal website, which was inundated with terrible insults. 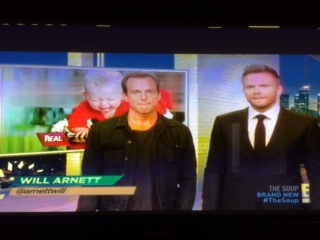 My issue isn't with The Real, The Soup or even Will Arnett. My greatest concern is that had The Soup let that clip air just two seconds longer, they would have seen this: 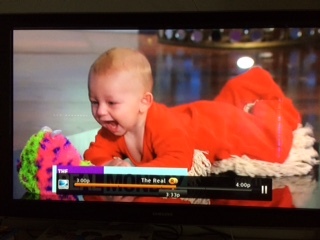 As a television producer myself, I could not be more well-versed in the art of editing. I spent nearly five years with The Bachelor, a franchise best known for making people look crazier than they claim to be. Still for me, this crossed a line.

Though I never met previous Bachelor Juan Pablo Galavis, I was outraged by the remarks he made when asked by a member of the press if a gay man should be The Bachelor. I immediately found and listened to the raw audio of the interview before jumping to conclusions. Maybe, just maybe, had the news clip aired a moment longer, the result would have been way different. (Let's just say in that situation, the media got it right.)

I know better than to believe all that I see on television, see in tabloids or read online. In fact, I take so much with a grain of salt that I should be concerned about my health.

My only hope, for the next victim's sake, is that everyone else does the same.

More:
parenting advicethe soupParenting Social MediaParents
Newsletter Sign Up
Raise the kind of person you'd like to know
Subscribe to our parenting newsletter.
Successfully Subscribed!
Realness delivered to your inbox