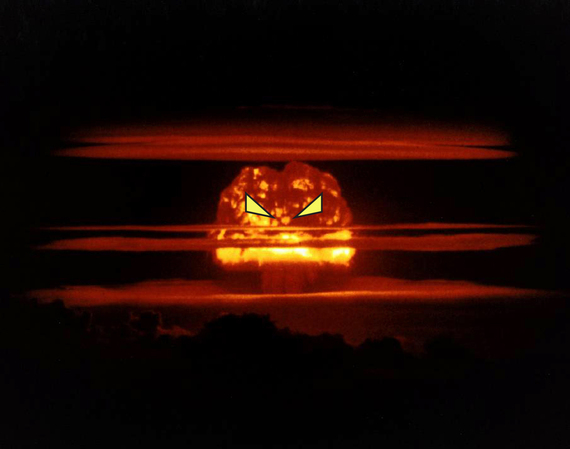 It was four days before Halloween and the spirits were tense, both those above and those lurking in the waters below. There was agitation and busy preparation everywhere, and a sense of gloom and doom was weighing heavily on everyone's minds. Deep in the waters the heat was rising, and the lost ones were finding no rest. Provoked by the world above, they were ready to unleash their curse. Had the time come for the world as they knew it to end?

It was indeed four days before Halloween: October 27, 1962. The spirits were tense, both those above, in the eleven US Navy destroyers and the aircraft carrier USS Randolph, and those lurking down in the waters below in the nuclear-armed Soviet submarine B-59. There was agitation and busy preparation everywhere due to the Cuban Missile Crisis, and a sense of gloom and doom was weighing heavily on everyone's minds. Deep in the waters the heat rose past 45ºC (113ºF) as the submarine's batteries were running out and the air-conditioning had stopped. On the verge of carbon dioxide poisoning, many crew members fainted. The crew was feeling lost and unsettled, as there had been no contact with Moscow for days and they didn't know whether World War III had already begun. Then the Americans started dropping small depth charges at them. "We thought - that's it - the end", crewmember V.P. Orlov recalled. "It felt like you were sitting in a metal barrel, which somebody is constantly blasting with a sledgehammer."

The world above was blissfully unaware that Captain Savitski decided to launch the nuclear torpedo. Valentin Grigorievich, the torpedo officer, exclaimed: "We will die, but we will sink them all - we will not disgrace our Navy!" In those brief moments it looked like the time may have come for the world as was known to end, creating more ghosts than Halloween had ever known.

Luckily for us, the decision to launch had to be authorized by three officers on board, and one of them, Vasili Arkhipov, said no. The chilling thought of how close we humans were to destroying everything we cherish makes this the scariest Halloween story. Like a really good Halloween story, this one has not a happy ending, but a suspenseful one in which we've only barely avoided the curse, and the danger remains with us. And like the very best Halloween stories, this one grew ever scarier over the years, as scientists came to realize that a dark smoky Halloween cloud might enshroud Earth for ten straight Halloweens, causing a decade-long nuclear winter producing not millions but billions of ghosts.

Right now, we humans have over 15,000 nuclear weapons, most of which are over a hundred times more powerful than those that obliterated Hiroshima and Nagasaki. Many of these weapons are kept on hair-trigger alert, ready to launch within minutes, increasing the risk of World War III starting by accident just as on that fateful Halloween 53 years ago. As more Halloweens pass, we accumulate more harrowing close calls, more near-encounters with the ghosts.

This Halloween you might want to get spooked by watching an explosion, read about the blood-curdling nuclear war close calls we've had in the past decades, and then hopefully you will do something to keep the curse away, in the hope that one Halloween we'll be able to say: nuclear war - nevermore.