We are a culture obsessed with youth and the futile task of keeping it. This is not news, it's not even particularly interesting at this point, but still it's the number one focus of marketers, product designers, and certainly cosmetic surgeons (we are the cosmetic surgery capital of the world). With all this attention on the aging population, you'd think there was a boon of good-will toward the demographic, but don't be fooled; old people may be fodder for manufactures, marketers and those looking to make money off the enormous and relatively wealthy demo, but the fact is, NO ONE LIKES THEM. 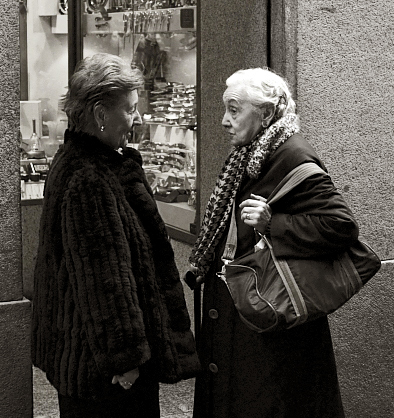 Old people are to be endured, managed, patronized and sold to, but only as novelties, as obligations; not viable, functioning, contributing elements of contemporary society. Young turks in every industry -- be it entertainment, finance, advertising, marketing, journalism, real estate, architecture, whatever -- are blind to "the greatest generation," quick to sneer about "boomers" and "Gen Xers," and ready to hip-check any old guy or gal out the door with excuses about Zeitgeist, "language," pop culture pulse, hip quotient, technical savvy, image, blah, blah, blah, without taking a moment to ascertain if the old guy just might have a better idea, a smarter take, a deeper point of reference, or maybe just "knows his shit," as I heard one incredulous youngster comment recently. Old is stink and in this "youth is always better" culture, old writers have to sue against ageism, old actors have to reinvent in the face of planned obsolescence; old blue collar tradespeople are "worn down" or pushed to retire, and old corporate workers have to dye their hair, update their wardrobe, keep their wrinkles in check, and certainly lie about their age; anything to keep that damn unavoidable, irrevocable, inexorable thing called AGING from getting them flung out the door before they're ready to go.

Where they've got it wrong, the young people doing the flinging? THEY'RE GOING TO BE OLD TOO. Someday -- and not as far down the line as they might imagine -- they're going to feel the heat of some younger turk smelling their "stink," poised to push them off the cliff, and that's when it's going to hit them, the mistake they've made: They created the cliff. They designed their own demise, their own obsolescence, the big, black abyss where old people go; all without considering that they'd be getting old too. And they don't think about that. Because they've paradoxically created a world in which age doesn't exist, it "disappears." And that's the world that will be waiting for them. Personal planned obsolescence. A sort of cultural suicide.

Any way to turn this around? Not likely for some. They're too entrenched, they can't see beyond their own current youthfulness, their scope doesn't go far enough to view the future and see themselves in it... or not in it, as it were. They'll get pushed over the cliff when their time comes and not even realize it's their own hand on their back. But for some, there's hope. Pay attention to these few simple suggestions:

1. Don't ask anyone their age, don't assume you know their age; if you find out their age don't say "you look great for _____!" Just leave age out of the question. Do ask about their work, their book, film, product, app, etc., and listen enough to realize just how much they know and how exciting their creation is.

2. If someone asks a question like: "Is Hillary Clinton too old to be president?" answer whatever is true -- you either like/don't like Hillary Clinton -- but be sure to let them know her age has nothing to do with it. Because it shouldn't.

3. When perusing articles with titles like: "Doesn't She Look GREAT for 50?" be sure to make note that every single face involved has either been fixed by Photoshop, a cosmetic surgeon or both. Don't buy the notion that what looks "GREAT" about any age is a face that's been artificially arranged to have few wrinkles and little sagging. It's not. Judi Dench is a knockout, as are these other "natural beauties." Learn to like them without the artifice.

4. When you're reviewing someone's resume, forget trying to figure out their age based on the chronology of their work history and just focus on their experience, their level of discourse, and whether or not they're qualified. Be willing to think outside the box and actually hire a journeyman with experience in lieu of a zippy tech geek who looks hipper on the "staff" page of the website.

5. Realize that for every limping matron in a smock or beer-gutted 60-something yelling at the TV, there are as many (more?) incredibly vibrant, contemporary, culturally aware people in their 50s-90s (I mean, Betty White, come on!) who know what "yolo" means and who can work their own smart phone. They can also rip off a killer screenplay, kick ass on the drums, hit a ball out of the park, and take an ailing start-up and whip it into the black. Don't buy into stereotypes... you'll lose out on a lot of good people.

6. Don't decide old music, old films; old anything is too old to embrace. True art aficionados revere those who came before; they pay homage by listening, watching, reading and seeing just how universal the language of art really is. Be one of those people. Billie Holiday is as transcendental as Adele and watching Paul Newman on screen makes some of today's male stars look... young. Pay attention to what came before. You'll be part of "what came before" before you know it.

7. Don't assume because someone doesn't understand the Internet, can't program their remote, and thinks true blood is what they donate to the clinic every quarter that they have nothing to offer you. They do. You just have to put down your smart phone, turn off your iPad, and shut your chattering, know-it-all mouth for a minute to listen and, maybe, learn something invaluable.

8. Think about your grandparents... how you'd feel if someone treated them like disposable "nothings" and kicked them out the door for being old, despite their wealth of skills and experience. Think about that the next time you're staffing your writers room, hiring someone to be your office manager, or even remotely considering firing Myra over there because she's just not quick enough with Reddit postings.

9. The richest amalgam of anything is when the best of all elements are brought into the mix. Any situation, whether project, staff, or new venture can be best served by tapping into both the contemporary edge of youth and the seasoned awareness of maturity. Don't be sold on what's young, be sold on what's best.

10. Never forget this: YOU WILL BE OLD SOMEDAY. Think about how you'd like to be treated, how you'd like your experience, skills, lifetime of hard work and accrued successes to be viewed and valued. Then do that. Do that now. With everyone you meet, especially that old guy or gal.

Because that's the secret. We're all in this together, we're just at different points of the trajectory: even that three-year-old is aging and you will be old someday, too.

Follow Lorraine Devon Wilke on Facebook, Rock+Paper+Music, and Addicting Info; details and links to her other work at www.lorrainedevonwilke.com.