By Elyse Wanshel, writer at LittleThings.com

We all sleep, but did you know that the way you sleep says a lot about who we are as individuals?

So, what happens when you throw different sleeping styles -- and personalities -- into one bed? Or really, any two individual personalities into one of the most intimate and venerable situations we humans experience?

It's actually quite fascinating.

When we sleep, our subconscious minds take over. Because of this, the body language we use with a partner while we snooze can be a remarkably precise way to gauge what's going on in our relationships.

"Even if you can't or don't articulate those things while you're awake," says Patti Wood, a body language expert with more than 30 years of experience and author of Success Signals, A Guide to Reading Body Language. Many other experts and psychologists agree with this idea and have conducted studies in and written books on the subject. They have uncovered the ten most popular couple sleeping positions and the secrets they have found about each is truly intriguing... 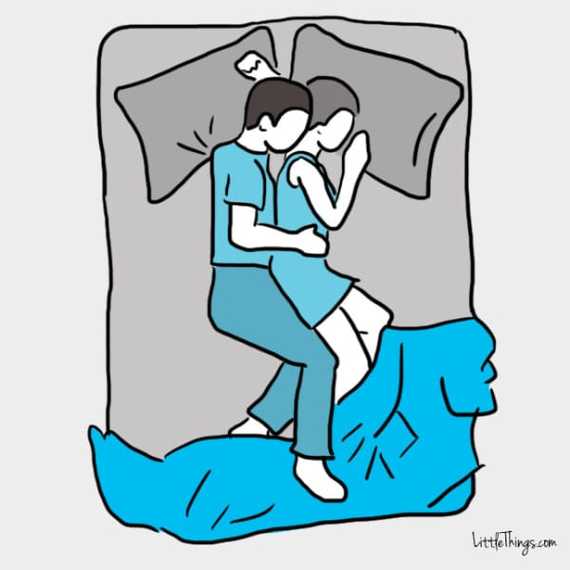 According to a study done by relationship psychologist Corrine Sweet, the position is only adopted by a fifth (or 18 percent) of couples and demonstrates a dynamic in which, " One partner takes a protective stance over the other."

Although it's a sweet, it can also be a little saucy. "It's a very vulnerable position that's sexual, but says, 'I trust you,'" said Patti Wood, a body language expert with more than 30 years of experience and author of Success Signals, A Guide to Reading Body Language. 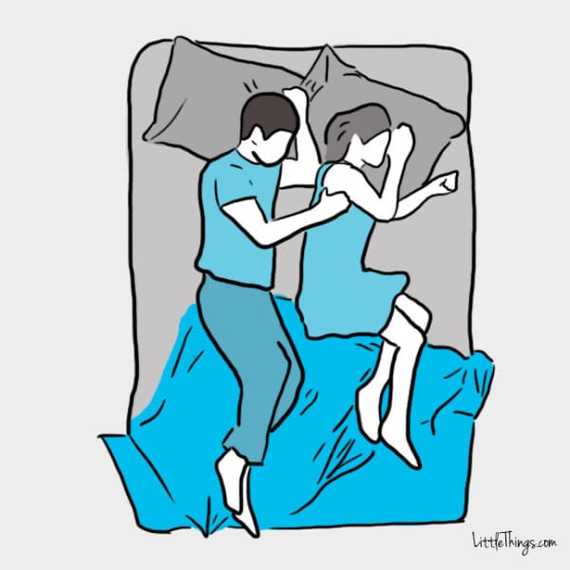 New couples tend to have the most physical contact in bed, but once the relationship matures, the novelty of sharing a mattress wears off.

The loose spoon is typically what a couples that are a fans of spooning eventually do once their relationship matures and each individual wants to revert to a position that produces the best quality sleep, said Paul Rosenblatt, author of Two in a Bed: The Social System of Couple Bed Sharing.

It's like the big spoon saying, "I've got your back, you can count on me," but it's not as sexual as spooning closer, Woods said. 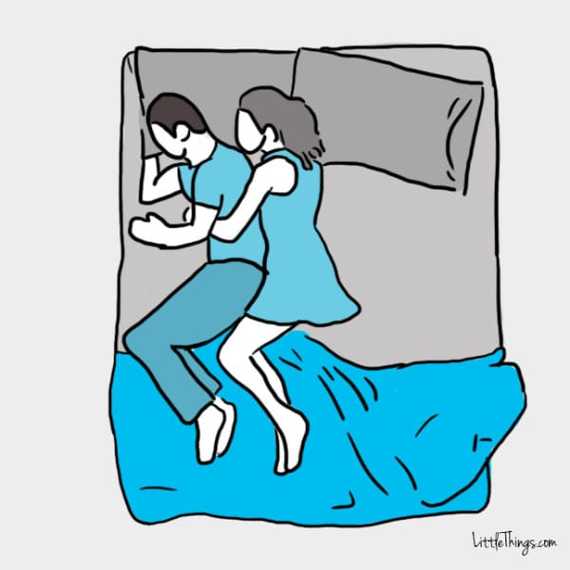 This is like spooning, but it's when one person is in pursuit of the other. One person has drifted to the other side of the bed, and the other one is "chasing" them.

This can mean two things. One that the person who is being chased wants to be pursued, or is playing hard to get.

The other thing it can be, according to Samuel Dunkell, author of Sleep Positions: The Night Language of the Body is something called "illegal Spooning" because the person has retreated because they want space. 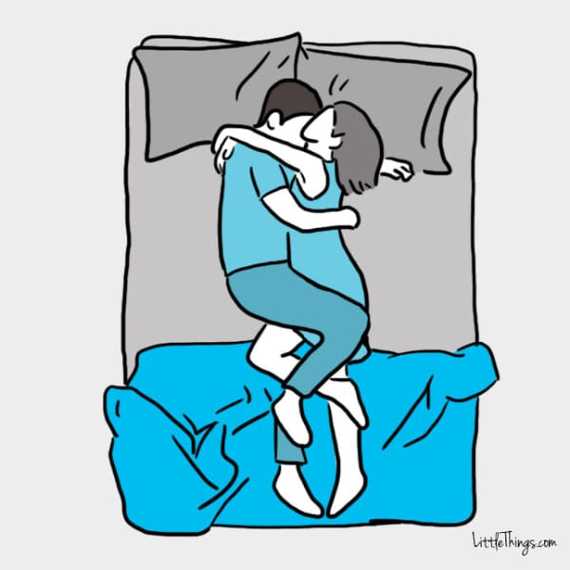 This extremely intimate position is even more rare than the Spoon. It tends to happen when there is either intense emotions at play (like after lovemaking) or at the start of a romantic relationship.

Some couples maintain it throughout their relationship but it isn't necessarily a good thing. According to Elizabeth Flynn Campbell, a New York psychotherapist, "[the couple] could be overly enmeshed, too dependent on each other to sleep apart." 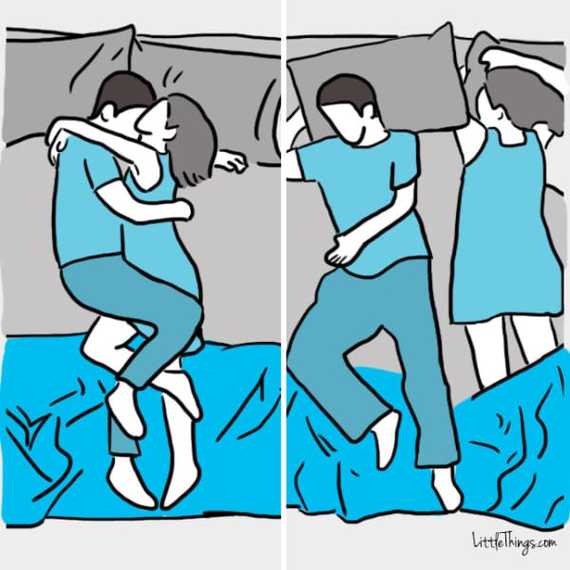 This position starts with The Tangle position, but then unravels after 10 minutes or so.

Believe it or not, this position is a sign of a stronger relationship than The Tangle. Yet only eight percent of couples adopt this two-part position. Dr. Sweet said it's, "A compromise between intimacy and independence, allowing for the best of both worlds." 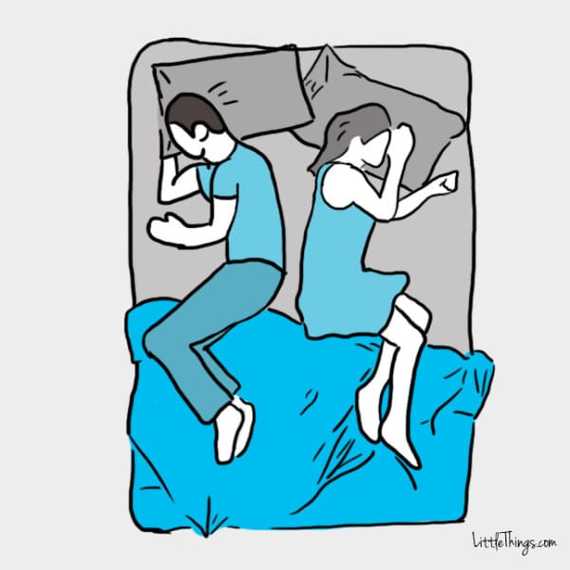 If you and your partner sleep facing opposite directions with space in-between ­- don't fret! This is actually a good thing.

According to a study done by relationship psychologist Corrine Sweet, couples that sleep back-to-back without touching are "connected and secure in themselves. This position shows both closeness and independence in the relationship."

It's also popular, 27 percent of couples prefer this sleeping style. 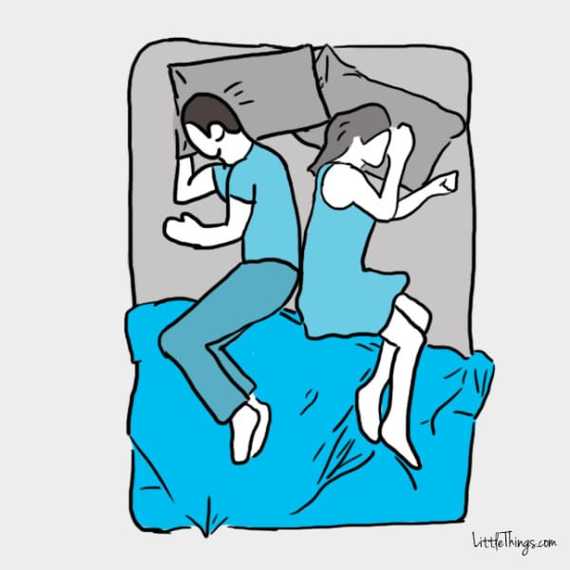 If you sleep back-to-back but you touch with your butts or backs, this is also a good thing -- but it's also novel.

According to Dr. Sweet, this means, "Both partners are relaxed and comfortable with one another." Yet this position is more common amongst newer couples, or those that have been together for under a year, rather than a more long-term duo. 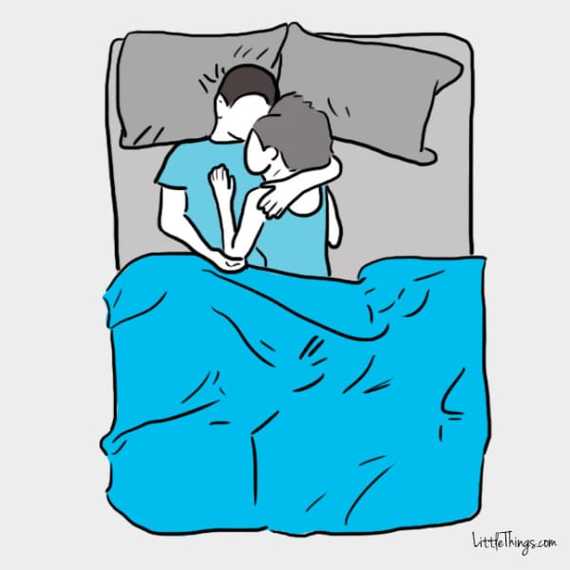 This sweet position, in which one partner rests their head on the other's chest, while their legs are intertwined is often seen in early relationships and occasionally rekindled ones, according to Dr. Sweet.

This is a very nurturing posture that creates a sense of protection. Shirley Glass, a psychologist and martial therapist, also notes, "There's a high level of trust here," as this snuggling position has a "strengthening sense of comradeship and protection." 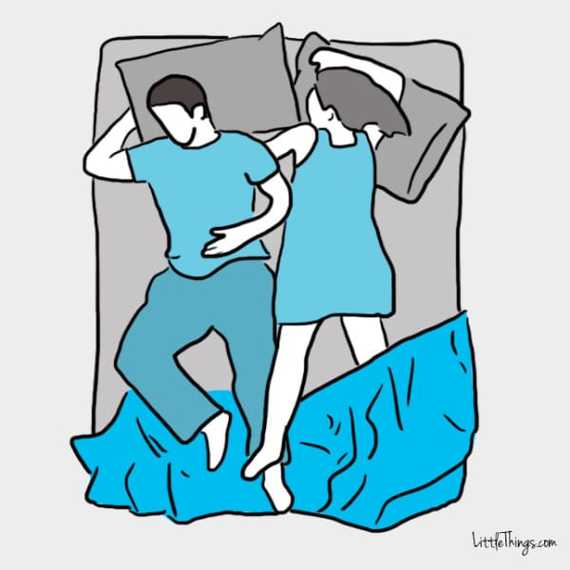 According to Wood, if your partner plays footsie with you in bed, or intertwines their legs with yours, it means they crave an emotional or sexual connection.

A pair of tangled legs is also a sign that the two of you can't get enough of each other -- even when you're sleeping. "It means your lives are intertwined, that you function as a pair. You probably finish each other's sentences and take care of each other," Wood said. 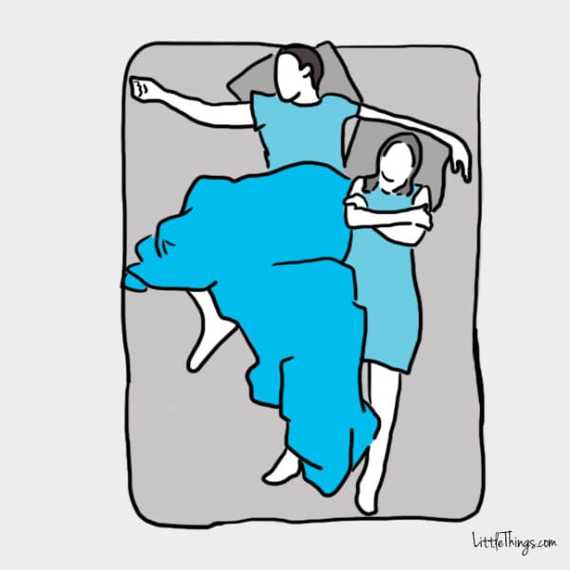 If a partner takes the "starfish position," one in which they sprawl out and hog the bed, this means that they tend to be selfish -- especially if they begin to push the other partner so they're hanging off the bed.

If this is happening in your relationship, it's time to have an honest conversation.

"One partner dominates the space, while the other takes a secondary role," said Sweet, and most people do not want to play second fiddle.

You can also tell who is dominating a relationship by where their heads are when they sleep.

When a couple's heads are right next to each other, it means they are equal, and if they touch, even better -- it's a sign that they have like minds and know what's going on in each other's heads, Wood said.

People who sleep closer to the headboard tend to feel more dominant and confident, while those who place their heads further away from it tend to be submissive and have lower self-esteem, she also said.