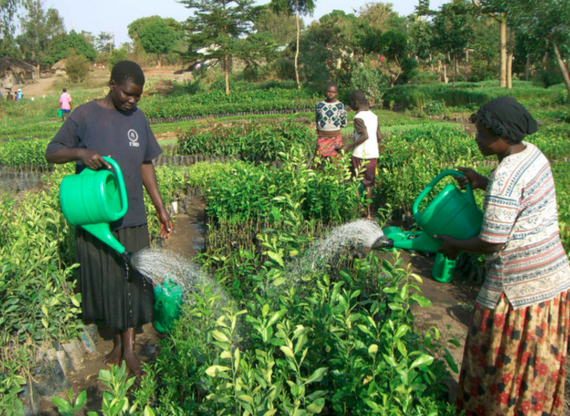 One of the main areas of interest for Ugandans in the run up to the 2016 elections was the state of the economy. The Electoral Commission has declared Yoweri Museveni the winner although to date, the opposition still disputes the results.

In the previous decades, Uganda grew rapidly. Thanks to this growth it managed to reduce poverty rates.

Uganda benefited from a favourable external environment. Factors included substantial debt relief, high commodity prices, plentiful donor financing and relatively low borrowing costs. This is now no longer the case. Instead Museveni and his new administration will have to confront some hard external realities. These include lower commodity prices, declining donor flows (especially budget support), and the need to rein in the fiscal deficit.

The sharp depreciation of the Uganda Shilling (about 27% against the dollar between September 2014 and September 2015) has been a particular short run concern for the electorate. The weakening of the shilling led to increases in domestic prices, with annual core inflation rate at 7.1% in January 2016, compared to 3.7% in March 2015. The depreciation reflects its current account deficit - the widening gap between what the country pays for its imports and what it earns from its exports. It is therefore a necessary adjustment to make Uganda's exports more competitive.

Although there have been many calls for the Bank of Uganda to stem the depreciation of the currency its monetary policy, aimed at relieving the inflationary pressures of the depreciation, has contributed to a relatively stable macroeconomic environment. The Bank has done a stellar job in stabilising inflation through increases in interest rates, beginning in April 2015. This has helped position the economy for an eventual return to trend growth, although this also means that borrowing has become more costly for the private sector in the short run.

Beyond this, the medium term challenge is to accelerate the pace of moving workers from jobs in agriculture and the informal sector into modern industries. This is what economists call the structural transformation of an economy. This will also be a necessary precondition to tackling the high unemployment rate as the manufacturing sector should provide more opportunities for formal employment.

Uganda has performed comparatively well in terms of raising its manufacturing productivity. But the sector is still characterised by limited value addition. It is also not yet contributing significantly to creating jobs, as one would predict.

Here urbanisation will be an enormous opportunity in the coming decade. Uganda can tap this opportunity by using economies of agglomeration to drive new industries and exports to achieve new levels in productivity. To do this, investments in urban infrastructure as well as targeted policies will be necessary to promote density and connectivity. This is the model best illustrated by the economic growth of the East Asian Tigers.

Accelerating the economy's structural transformation will therefore have to be one of the major focuses for Museveni's new term.

Regional integration will be another key route in increasing Uganda's export competitiveness and creating jobs. Slower global growth and weaker commodity prices mean that it is in Uganda's interest to look for more opportunities in the East Africa region. One potential area is linking firms to regional value chains, which can then function as stepping stones to global value chains.

But the government should also resist the temptation to try and pick and thus promote potential "winning industries". It is not always clear where a country's comparative advantage lies. The focus when looking to increase export competitiveness should be on investments that create a favourable environment for the private sector as a whole.

Agriculture, the sector that currently employs the largest share of Ugandans, should not be ignored. Raising productivity will also be important in this sector. To do this, Ugandans will need to use more inputs.

But, as recent research has shown, the big challenge here is the prevailing issue of fake inputs. Examples include substandard fertilisers and seeds that are sold on the market. These do not produce higher yields. This means that farmers, rightly so, do not want to invest in them. Tackling this problem and providing an enabling environment for farmers will raise agricultural productivity.

In addition, better connectivity through investments in roads and electricity as well as appropriate trade policy will bolster an enabling environment. Larger agribusiness could emerge, employing more people.

Although current GDP growth forecast for 2015/16 is below trend at 5.0%, the Centre for International Development at Harvard University projects that East African nations, including Uganda, will be among the fastest growing economies. They are forecast to achieve average annual growth of 5.5% between now and 2024. These forecasts are based on a measure of economic complexity, which takes into account the diversity and sophistication of productive capabilities used to produce a country's exports.

However, Museveni will still have to realise this potential. This means not only growing the economy but, more importantly, accelerating structural change. Such a change can be achieved by creating an environment that enables firms to be created and shifts the average Ugandan from the informal to the formal economy. This will also come from investments in human capital, including quality education and health care services. Such investments will ensure that Ugandans can harness opportunities from economic growth.