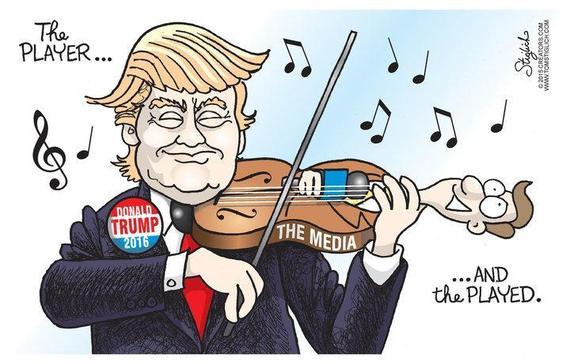 Donald Trump is inarguably the single most hotheaded human being to ever run for president of the United States of America. He is a misogynist. He is a racist. He is a xenophobe. His campaign is the perfect recipe for a political disaster. Through a number of highly controversial derogatory remarks, he has already alienated women, immigrants, black people and Muslims, a considerably large chunk of the voters if you ask me. Despite all of this, he somehow manages to bludgeon his way through the election primaries, spreading terror and frustration throughout the country. But how?

After Trump announced his candidacy for president, he dropped what would be the first in a series of political bombs upon the country. Republican nominee John McCain was gunned down, captured and beaten into shreds during the Vietnam War. How does that make him a war hero? A real war hero would have never gotten himself captured in the first place. As for Carly Fiorina, she was the ugliest candidate he had ever seen. How could people like this run for the country's president? Only Donald Trump has the right to run for president.

His strange obsession with Megyn Kelly is no news either. Shortly after being grilled by the moderator for his sexism at the Fox News Presidential Debate, Trump made some really untoward remarks about Kelly's cycle. Things I'd rather not repeat here. His exploits didn't end just here. He will build a wall between US and Mexico and have Mexico pay for it! He will summarily ban all Muslims from entering the United States of America! He will put an end to Obamacare! Okay, the last one wasn't that bad, but god knows what other plans he has got in mind for when he becomes president. Really scary.

But how did such a morally detestable man find his way through so far in the elections? The question has given many Americans many a sleepless night. You see, the secret to Trump's rise lies in two things: the strange psychology of his supporters and his disturbing expertise in exploiting that psychology as a demagogue. We will take them both up one by one.

Political analysts have had a real rough time figuring out this year's elections. For some incomprehensible reason that still remains a complete mystery, this year's elections are no longer governed by the usual determinants of polling. However, as pollsters tear at their hair in utter frustration, psychologists have been having a field day explaining this strange phenomenon that has overtaken the country. According to them, Trump supporters display a personality trait commonly known as authoritative personality, a trait shared by people who follow a somewhat fascist culture. To these people, honor and discipline are the greatest moral code. In a country fast decaying into inexistence, these people will lend their dictator every bit of support he needs to make the country rise again.

His supporters are mostly white people in their middle ages. Upended by the liberal policies of Barack Obama, these people are convinced that the fate of their beloved country stands on the edge of a knife. Under the effect of fear and helplessness, these people choose to lend support to someone of authority. Someone who is fearless and straightforward. Someone strong, someone unafraid to say things even if they are politically incorrect. Someone like Trump.

As an efficient demagogue, Donald Trump knows fully well how to manipulate a crowd like this using a circle of humor and fear, a tactic that will entangle their puny minds and make them obey his every command. First, through carefully designed mockeries hurled at his opponents, he makes the crowd laugh. That's how he draws them in. Once they are set, that's when the real fun begins. Through drama and theatrics, he introduces these gullible people to his fearsome version of the real world. A world where Mexicans rape children. A world where Muslims terrorize the streets. And once the crowd is scared to death, he offers them the only viable solution. A man so strong that he is capable of redeeming them of their disastrous future. Suddenly, everything seems to make sense. They are the people and he is their leader. That's how it was always meant to be. After all, Donald Trump will make America great again.

As much as the media has grown to deride and ridicule him for his comments, Donald Trump is a real threat and we must take him as such. True, perhaps he will never make it to the White House. But the growing trend of fascistic personality in a democratic nation in itself is no laughing matter. He may be a comedian and a fool. But he is a dangerous one.