In April, after four planes, a ferry, and two outriggers, I arrived at Handumon, a remote village and field station on Jandayan Island in the Philippines. As I lay down the first night under a mosquito net, wiped out and bit disoriented, I took in the nocturnal forest sounds. That's when I heard it: an impressive rendition of Neil Diamond's "Love on the Rocks" amidst the din of tree crickets and the occasional bark of a tokay gecko.

Karaoke, or "videoke" as it is known in the Philippines, is a national pastime, even in isolated Handumon. At breakfast the next morning, Dr. Nick Hill, a scientist with the Zoological Society of London (ZSL), assured me that at some point we would all participate in this tradition. I laughed, though my pulse gave a panicked throb as I am far more afraid of a solo singing performance than anything I could ever encounter underwater.

And that's why we, four underwater photographers from the International League of Conservation Photographers (iLCP), were there -- to get in the water. iLCP had teamed up with Project Seahorse and sent us to document the Danajon Bank. Claudio Contreras-Koob, Thomas Peschak, Luciano Candisani, and I traveled from Mexico, South Africa, Brazil and the US, respectively, to photograph this little known but extremely important place.

When I first learned of plans for this iLCP expedition I asked what most anyone would ask -- What's a Danajon Bank? Though I've traveled throughout Southeast Asia, including the Philippines, the area was a complete unknown. For most of the world, and even within the Philippines, this unique biological treasure is unfamiliar -- but it shouldn't be.

Danajon Bank (Da-na-haun) lies in the central Visayas region of the Philippines. Spanning 97 miles along the islands of Bohol, Cebu, Leyte, and Southern Leyte, it is one of just six double barrier reefs in the world. Not only is Danajon Bank a rare geologic formation, it is considered one the richest areas of marine biodiversity anywhere, the place from which almost all Pacific marine life evolved.

As iLCP photographers, we were there to not only document the beauty and richness of Danajon Bank, but also the destruction of this biologically sensitive and threatened seascape. The resulting images would help Project Seahorse and other conservation partners inform and inspire the world to care about the ecology and culture of this region.

For two weeks, our daily schedules were packed: rise at 3 a.m., pack the boats, depart at 4 a.m., shoot topside at first light, shoot underwater until sundown, night dive, return to camp, eat dinner, download images, charge batteries, sleep for two or three hours, repeat. Someone once told me that if I wanted to sleep in, I should have been a writer.

Coral reefs, mangroves, and seagrass biomes are vital habitats that are in global decline. Danajon Bank is no exception and is a perfect example of the fragility of these systems. Sadly, much of the reef system is a mere relic of Danajon's booming primordial past and in the water, I was immediately struck by the absence of fish. Compared to the colorful and lively reefs I am used to seeing in tropical southern seas, the Danajon reefs and lagoons are devoid of larger species. As a result, top predators like reef sharks have ceased to hunt these depleted grounds.

Overfishing and destructive fishing methods are to blame. Blast fishing, using explosives to instantly kill sea life, has long been practiced in this area. Although dangerous and illegal, it continues on a secretive yet devastating scale. This quick-catch method and indiscriminate bottom trawling have ravaged sea life, and nearly 200 species are threatened. Indeed, it was not difficult to find examples of dead or dying reefs - submerged like eerie, aquatic ghost towns. I felt like an archaeologist who has discovered the sad fascinating remains of a lost civilization.

Not surprisingly, human encroachment, population growth, pollution, and climate change pose additional pressures on this vast ecosystem and the people it supports. An estimated one million people depend on the Danajon's waters for their livelihoods and no one is more aware of the diminished fish stocks and paucity of large fish than these locals. Meager catches of just a handful of small fish -- an entire night's work -- were a common sight on the islands that we visited.

The issues here are complex, as are the answers. However, thanks to Project Seahorse and other groups, there is reason for hope. Remarkably, their work within the past decade has resulted in the establishment of 34 Marine Protected Areas (MPAs) among Danajon Bank islands.

Our dives in these MPAs were a different experience entirely. Within the protected boundaries, biodiverse ecosystems are rebuilding. In some cases, the contrast was downright stunning as in the Bilangbilangan MPA where seemingly endless fields of hard corals cover the shallow sea floor. In deeper waters, enormous sea fans (gorgonians) and sponges rise into the current. Even endangered branch corals (Anacropora sp.) are making a comeback.

Though large fish remain uncommon, these vibrant reefs are home to many smaller species of fish and invertebrates. The expected denizens like anemonefish, parrotfish, angels, and wrasses, and surprise discoveries, like a juvenile blue-edged sole (Soleichthys heterorhinos) and a troop of messmate pipefish (Corythoichthys intestinalis), made photographing inside the MPAs a pleasure and hinted at the myriad of life forms that once sprung from this area.

Though all the data is not yet in, many local fishermen believe that the MPAs are having a positive effect on their catches. Whole villages have embraced the concept as some have taken it upon themselves to police the boundaries or man guard towers to track potential poachers.

The people of Danajon are gradually moving to more sustainable fishing methods and looking for alternatives, like seaweed farming. Other ecologically sound practices are being developed, including a collaborative project between ZSL and Interface, a carpet manufacturer, where fishers are paid for their used fishing nets. These nets are unfortunately very abundant and detrimental when left in the local biomes. Yet through this program, they are collected, cleaned, bundled and exported to be upcycled into carpet tiles. With efforts like these, and additional and expanded MPAs, perhaps large fish and sharks will one day return.

When I travel to developing areas I am reminded that for some, conservation may seem a luxury. I'm grateful for those groups working towards lofty conservation goals, while still providing sustainable livelihood options for the people who depend on the reef. I am also reminded of our shared humanity and the many ways in which we are connected. My new Danajon Bank friends made me feel right at home, so much so that I spent my last night happily partaking in their cherished videoke. I sang my heart out! 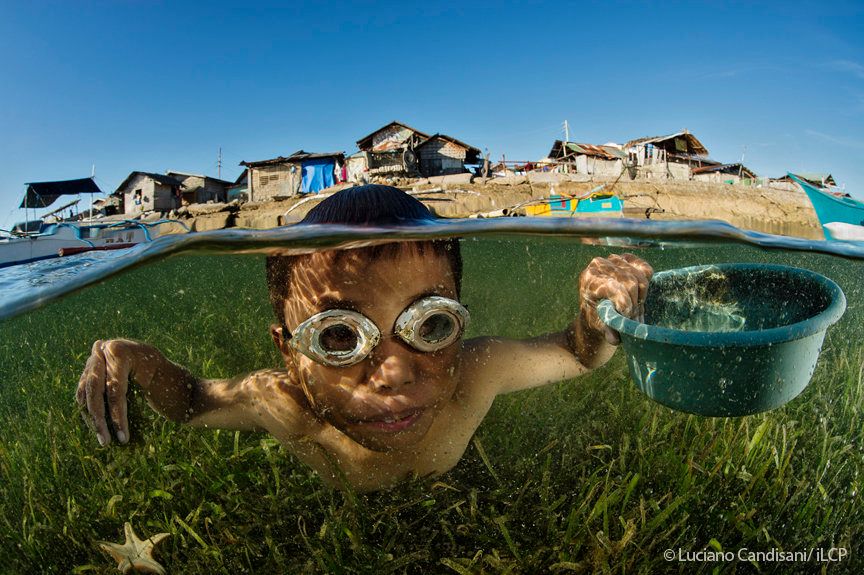