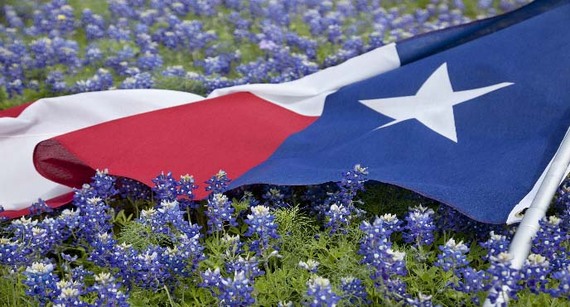 We Democrats are trapped in the big red Republican bubble of hot air that has covered Texas for the past 20 years. Even though it is sprouting a few leaks these days, our crowd is still looking for ways to punch a big enough hole in the bubble to breathe freely again, and bring our hapless Party back to life.

I just wrote a book called Turning Texas Blue, What It Will Take To Break the GOP's Grip on America's Reddest State. I had a few big ideas, along with a little history about how we came to be a state full of crackpots, crazies, and Machiavellian evil spirits, exemplified in perfect form by our Senator Ted Cruz who is the only viable Republican left to challenge front-runner Donald Trump to be the GOP's standard-bearer.

Sad to say, my prescriptions for resurgence of our party are probably not going to happen in the 2016 elections. We haven't reached the tipping point yet. No matter who ends up on the ticket—Trump or Cruz, or some as yet unknown pick of the elites—the GOP will probably continue its presidential election sweep of Texas that started in 1980 with Ronald Reagan and has not gone for a Democrat since then.

So what's a Texas Democrat gonna do in the meantime?

First, we have to face the painful reality that we haven't figured out how to move the needle very far in recent elections here. We only got 39 percent of the vote in the 2014 election for governor. Our glamorous, pro-choice candidate, Wendy Davis, lost the women's vote, virtually gave away Latino voters, and ignored white voters who in turn ignored her, giving her only 25 percent of their vote.

Let's look at what happened in 2012. Sure President Obama lost Texas. But if we toss around the numbers a bit, and if we had made a different kind of effort, life might be a little better for our hapless party today. After all, Obama carried five of our six big cities where the majority of Democratic base voters live. A mix of African American, Latino, Asian, single women, and younger voters helped put Dallas, Houston, San Antonio, Austin and El Paso in the Democratic column. Those significant urban victories happened because Obama won the African American vote by 98 percent, and he got an estimated 70 percent of the Latino vote. But he only pulled about 26 percent of the white vote. If he had managed to win more than 30 percent of the white vote in Texas as he did in other Southern states like Virginia, Florida, and North Carolina, and if he had invested as heavily in a get-out-the-vote effort among traditional Democratic base voters as he did in those states, he might have won Texas too. Sounds too good to be true, doesn't it?

Two factors would have been necessary to block the Republican capture of Texas's 38 electoral votes in 2012: An increase in white Democratic voters from 26 to 35 percent, and an increase in total Hispanic turnout from a paltry 39 percent of eligible voters to at least 65 percent of those qualified to vote. Here's the rub: almost 61 percent of eligible Latino voters in Texas did not cast a ballot in 2012. Only about 25 percent of Texas's Hispanics reported that any organization or political party had even contacted them leading up to the 2012 election. There's a big lesson here: if Democrats don't wage real campaigns on issues that matter to Hispanic voters, or make more significant efforts to persuade them to vote Democratic, the turnout will remain lower for Texas Hispanics than in states like Colorado, Nevada, or even Arizona. That's because Texas Republicans—even right-wingers like Rick Perry—have a history of fighting for every Latino vote they get. And in 2014, almost 44 percent of Hispanics voted for right-wing Republican governor Greg Abbott against Democrat Wendy Davis.

Texas Democrats keep wallowing in wishful thinking that if by some magical transformation those non-voting Latinos would just show up to vote for the ticket, we'd blow up that big red Republican bubble for good. It's not going to happen by magic.

Increasing Hispanic turnout for Democratic candidates is going to have to take a different approach. First, we have to understand that the Latino vote is not encased in just one monolithic block. It is a conglomeration of many diverse and different groups with little in common except a similar heritage and language. Texas Latinos are young and old, wage earners and professionals, small business owners and PTA moms, young couples just starting out and old folks living in multi-generational families. And although the majority are Mexican Americans, whole neighborhoods in San Antonio and Houston are home to Salvadorans or Honduran new citizens. The bottom line is that they often have different interests and needs, hopes and aspirations. A single get-out-the-vote Democratic message does not resonate across the board.

Most importantly, Democrats have to find a way to woo and win younger Latino voters. One third of the state's eligible Hispanic voters are between 18-29 and they are not voting. The future of the Texas Democratic Party here depends on these younger voters and we have not yet figured how to reach them where they live, which is in the new world of technology, social media, music, and massive cultural changes that are very different from what their parents and grandparents have experienced in Texas over the past 50 years.

Will the hateful anti-immigration rhetoric of presidential Republicans make a difference in Texas this year? It's already stirring up Latino voters across the country. But in Texas, we've got a bigger challenge. We have to make our efforts personally relevant to native-born younger voters, whose parents are also native-born. The interesting little secret about Texas exploding Latino population is that it is built on a high-birth rate among people already here, rather than a recent immigration surge from across the Texas-Mexico border.

Texas is home to Mexican American families who have been here five and six generations. Many of these established residents are not as personally touched by the immigration issue, as are first and second generation immigrants in places like Nevada and Colorado. Yet, the ethnic hatred aroused by candidate Trump and other Republicans could conceivably propel non-voters in Texas to cast ballots for Democrats in 2016. If Democrats could increase Latino turnout by 25 percent over the 2012 election, everything could change here—and nationally, as well.

There is something else happening in Texas to give Democrats long-term hope. Republicans have reached their peak voting strength in Texas; they have no room to grow. Their base vote in the suburbs is older, socially conservative, white and declining as a percentage of the whole. The solid Republican suburbs around Dallas, Houston, San Antonio, and Austin are witnessing a new influx of African American, Latino and Asian homeowners, as well as millennials, LGBT+ couples, and cultural progressives who are creating increasingly diverse communities within Anglo-dominated suburbs. So while the solid Republican base vote has probably hit its ceiling, Democrats still have a lot of room to grow if they play their cards right.

When some Democrat with a hefty bankroll is savvy enough to figure all of this out, the shift in Texas political fortunes will have a profound effect on how both Democrats and Republicans "run the numbers" in the Electoral College to win the presidency. If Texas were to become a genuine swing state like Florida, everything would change.

Take the example of California. When that state's prized 55 electoral votes became a sure thing for Democrats after 1992, Republicans had to scramble to win votes in states like Pennsylvania or Michigan that had strong Democratic voting histories, or they had to put together combinations of smaller state victories sufficient to secure the 270 Electoral College votes to win the presidency. That's not easy, as the last two presidential elections have demonstrated. If Texas were to flip, Republicans would have an even more difficult time implementing an effective Electoral College strategy.

On the other hand, national Democrats may find that they actually need to win Texas to assure their own prospects. Their much-heralded 2012 presidential victories in states like Colorado, Virginia, Iowa, and Ohio were so close as to provide no guarantee for future victories. And if Donald Trump emerges as the Republican nominee and maintains his hold on working class white voters in the industrial Midwest, Democrats might need to make a play for Texas—even in 2016. We surely don't want to be caught in one of those ruminating regrets by recalling that "we could've, should've, might've," but just didn't.

If Hillary Clinton is our party's nominee and she manages to pull at least 30 percent of the white vote here, and improves Hispanic turnout 25 percent over 2012, Texas becomes a possibility. After all, she's always been popular in Texas, drawing almost a million votes in the March primary and overwhelmingly defeating Bernie Sanders. She could actually expand Obama's 2012 margins to bring Texas into play.

Today, there are even a couple of Internet betting websites that are giving odds that Texas just might turn blue next fall. One of them is the Irish gambling site, Paddy Power, and it's offering 14/1 odds that Texas will become a swing state this go-round - the first time any one has offered up anything positive about Texas politics in a long while—even if it's far away in Ireland and run by folks who want to take your money on a risky bet.

So, don't lose heart, my fellow Dems. Let's fight smart and bright in 2016, even if the odds are against us. At least someone is willing to take a bet on us. And if we're lucky—as gamblers sometimes are—we just might start poking enough holes in the big red stinking bubble to let in some fresh air, fresh faces, and fresh ideas to start us down the road to really turn Texas blue. 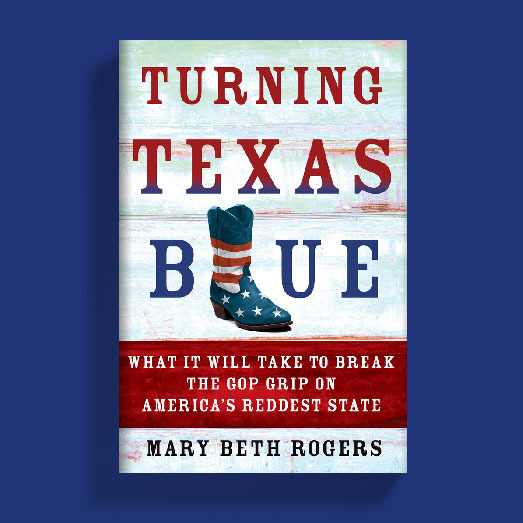 MARY BETH ROGERS is the last person to successfully campaign manage a Democrat to the statehouse in Austin. Rogers previously held the Lloyd M. Bentsen Chair in Business and Public Policy at the Lyndon B. Johnson School of Public Affairs at the University of Texas at Austin before becoming president and CEO of the PBS affiliate in Austin. Rogers is the author of two books on politics: Cold Anger: A Story of Faith and Power Politics and Barbara Jordan: American Hero.