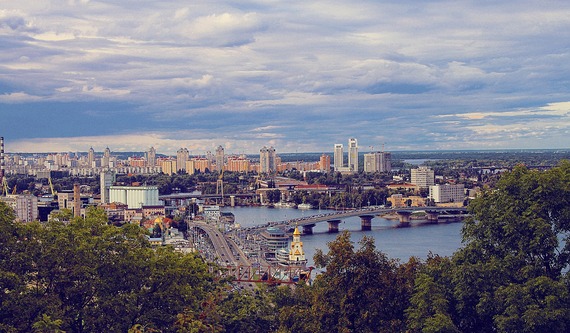 One of the tragedies of living in a country that is both a dictatorship and a hotbed of corruption is that many people never get a chance to realize their potential, even with top educations and skills.

That's because a relative handful of the elite in such countries skim off much of the wealth, leaving the 95 percent of ordinary citizens fighting for the crumbs.

One of the prime examples of this is the former Soviet Union since the fall of the Communist system 2.5 decades ago.

And a key measure of the tragedy is the brain drain that's been occurring in most nations in the region since 1991.

Most of those hoping that their leaders would embrace democracy so they would have more opportunity have had those hopes dashed.

Several countries have become outright dictatorships. Examples are Kazakhstan, where Nursultan Nazarbayev has ruled since the fall of the USSR, and Uzbekistan, where Islam Karimov has been the only ruler.

Both men have used their power to swallow chunks of entire industries, making them and their families rich.

Other countries in the region have pointed to their leadership turnover to contend they are democracies. These include Ukraine, Russia and Armenia.

In reality what is happening is not democracy, but just one autocrat being exchanged for another.

Corruption goes hand in hand with autocracy, of course. If you hold unlimited power, you can steal your country blind.

In fact, this practice is so common that a word has been coined to describe it -- kleptocracy, or rule by thieves.

Ukraine has had a series of kleptocrats, starting with Leonid Kuchma and ending with the now-deposed Viktor Yanukovych.

Because Vladimir Putin can tap as much of Russia's wealth as he wants, a number of international economists have labeled him the world's richest man, with a fortune three or four times larger than Bill Gates'.

Like Russia and Ukraine, Armenia has had changes of leadership since independence. Each new leader has used his position not to help the public but to increase his personal fortune, however. Armenia remains one of the poorest countries in the region, with most people just scraping by.

By syphoning off a lot of a country's wealth, kleptocrats rob the rank and file of opportunities to make their lives better.

A much publicized example was the governor of Odessa Province in Ukraine demanding a huge bribe a few years ago before he would allow the Scandinavian furniture company Ikea to open a facility in the region.

Ikea, which has a policy of not paying bribes, said no. It also noted that the bribe demand was so large -- tens of millions of dollars -- that if it had paid it, it would have made no profit in Ukraine for years.

The big losers in the Ikea story were Odessa-region residents who were denied hundreds of jobs with the company.

The kleptocracies in Ukraine, Russia and Armenia have led to millions of people leaving their homelands for opportunities elsewhere.

Many have been skilled professionals, including scientists, mathematicians and computer experts -- the kind of brain drain no country can afford.

There have been several waves of Russian emigration since 1991, with surges coming during economic crises and in response to increases in political oppression and the leadership vacuuming up more of the country's wealth.

About 3 million Russians left in the decade from 2005 to 2015, estimates Lev Gudkov, director of the independent Levada Center polling agency in Moscow.

They included many entrepreneurs -- people capable of building businesses and thus creating jobs -- who were fed up with corruption, red tape and crooked courts.

One of the surges in Russian emigration came after Putin was re-elected president in 2012.

More than 53,000 Russian professionals left for the United States, Germany, Israel and other countries in 2014 -- the highest figure in nine years, Bloomberg reported.

Ukraine's brain drain has been steady because its economy has bumped along without the intermittent flashes of economic success Russia has had.

The Maidan protests in 2014 that ousted the biggest kleptocrat the country has ever had -- Yanukovych -- have failed to live up to their supporters' hopes for a less corrupt society and more opportunity for the little guy.

Proof of that are two recent political developments that show little has changed in Ukraine.

One is that Viktor Shokin remains prosecutor general despite public howls about his refusal to bring corruption charges against a number of current and former officials.

Another is Poroshenko's apparent decision to name a crony -- Volodymyr Groysman -- as prime minister, instead of a Ukrainian American, Natalia Yaresko, whom many consider the one leader who would mount a charge against corruption.

Armenia is the former Soviet country with the worst brain drain as measured by emigrants as a percentage of the population.

In 1991, when it became independent, it had 3.5 million people. It now has fewer than 2.5 million, demographers say.

The majority of the emigrants have been laborers, construction people and others in trades work. But many are academics, technicians and other professionals who lacked opportunities at home.

Armenia's national ombudsman, Larisa Alaverdyan, hinted at corruption's role in the process in noting that the way to stop the brain drain was for politicians to work with civil society on the roots of the problem.

How long it will take for democracy, with its better opportunity for the little guy, to take hold in the former Soviet Union, is anybody's guess.

But one thing's for sure: As long as autocrats and corruption rule the roost, the region's brain drain will continue.