One of the gifts of art is that it allows us to image ourselves into another's experience. Last week, as I sat on the floor of the Whitney Museum of Art, pondering an installation by artist Gary Simmons titled, Step in the Arena (The Essentialist Trap) 1994, I was profoundly moved by the power of Simmons' piece to evokes the African American man's experience. A multi-layered installation of a whitewashed boxing ring, Step in the Arena stands alone in a bare room, on view in the show Singular Visions. Save for seven pairs of black wingtip tap dancing shoes, which hang from the ropes, this ring is empty. The floor, made of stretched canvas, is covered with a chalked-in diagram of footsteps, an intricate schema of the cakewalk, the dance preformed at minstrel shows during the days of slavery. A sense of absence pervades the piece: the fighters have gone, the white footsteps on the black floor are smudged and partially erased, the tap shoes have been left behind. We, the viewers -- the spectators -- are left on the outside, literally gazing through the ropes, with a sense of waiting. The stage is set, but empty. We are filled with both anticipation, and the haunting remembrance of past events, as if we have stumbled upon a ruined coliseum where gladiators of the past had no choice but to do battle. 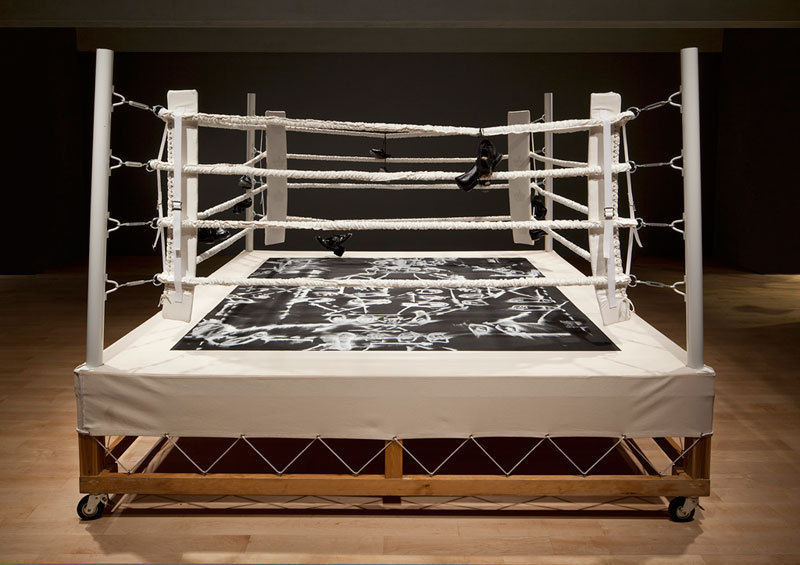 Gary Simmons, Step In The Arena (The Essentialist Trap), 1994. Whitney Museum of American Art; gift of the Peter Norton Family Foundation 95.83. Courtesy of the artist and Metro Pictures. Photograph by Sheldan C. Collins

However, the roped boxing ring suggests that for the African American man of today situations have not changed so much. Often compelled by disadvantage and limited choice to enter the ring, this metaphorical boxer is seduced by the promise of riches, but that promise is just another form of enslavement.

The title, Step in the Arena, referencing a song by the rap singer Gang Starr, is at once a call to arms and a warning to step into the arena -- where a black man's gift is merely flesh -- and where he is owned once he steps in. Simmons' work suggests that the arena is also about art and the marketing of the black artist's experience once he has been "essentialized." In this case, being essentialized means to be stripped down like a fighter, to a mere physical essence, or race-related experience, which is again an unchangeable trap, a static existence from which one can only emerge leaving ghostlike footprints behind.

In a global world that is often polarized by fixed ideologies, the risk of essentialism is the risk of reducing ourselves to just our inherent qualities. Essentialism relies on definitions by race, sex or other biological characteristics, and while these classifications are empowering, they can also be dangerous. Simmons' point is that whether gender or ethnic-based, specifications are traps because they limit us to gross generalizations.

The hip-hop artist, businessman and author, Jay-Z when discussing his book Decoded said that the hidden mission of rap "is to find fresh angles into emotions we all share." Thus art can serve as a revelatory doorway through which we think ourselves into another's world. It's an audacious ambition and one that plays out powerfully in Step in the Arena. There is great beauty in the elegance of black and white and smeared dance steps on a canvas floor, but the true force, potency and gift of this work of art lie in its transformative capacity to enable us to identify with an experience we might not have had otherwise. In the end, that's what allows Step in The Arena to deliver its a knockout punch.