At GCC we work with many of the world's most respected, forward-thinking employers, and it's interesting to note just how many are now focusing on mental health.

One of the most enlightened employers we work with is Fiat-Chrysler in Brazil, where there is a constant effort to adopt best practice from their colleagues across the world. They currently look to Germany, where fellow car manufacturer Daimler has introduced stress-free breaks for its 100,000 employees, giving them an option to have all of their new emails deleted while they're away. Anyone who sends them an email receives an automated response advising them that the person is away and can't be reached.

The idea is designed to have employees back at their desks at the end of a holiday, ready to start afresh rather than with an email traffic jam. This isn't the whim of one human resources department, either; the German Government is poised to enact anti-stress laws that will make it illegal for employers to send emails to workers during free time and holidays.

This might sound extreme, but the issue that needs to be addressed is a serious one. Our client base hails from over 50 industry types and encapsulates employee populations spanning every socio-economic, geographic and psychographic audience imaginable -- the rise in mental health issues is consistently escalating across the industrialized world -- especially among white collar, cubicle dwelling employees.

These employees are struggling to keep ahead of the emails that land in their inbox each day. According to a McKinsey Global Institute report, the average employee today will spend close to 30% of their time just slogging through email. Other research shows that employees check for emails around 74 times per day on average, and statistically, half of your employees checked for emails in bed this morning.

The numbers below, gathered by Microsoft, illustrate the full impact of email in employees' daily lives:

We're an organization that is obsessive about understanding the human condition and the factors that are fueling the rise in stress across the world's working population. Being 'constantly email alert' is a real driver. Checking for email is like an itch that just can't be scratched for millions of employees. From a psychological perspective, it's an ongoing exercise that taps into employees' hopes, fears and anticipation. The hope that perhaps some good news is sitting in their inbox and the fear that the opportunity will pass by if it isn't recognized and acted upon. Or conversely, the nagging thought that some major issue can be averted if it can be recognized and caught in time.

On top of all this, the rise of the internet and, more recently smart phones, has quickly eroded the division between employees' work and their life outside the office. Staff's entire lives are centered in one device, so an employee who is confirming a private dinner date invariably winds up visiting their work inbox as well. Thanks to technology, the world has changed fast, but your employees haven't had time to adapt and create boundaries and compartmentalize things.

The future doesn't look any brighter, either. According to global data group Experian, inbox volumes will increase by around 15 percent in 2015 compared to 2014. It's no wonder that in order to keep up, many of your employees are starting 'the new nightshift'. This second shift from 9p.m. to 11p.m. is on the rise, and it's a consequence of global competition, reductions in job security and the rise of businesses operating across multiple time-zones. In an age where few employees can actually point to a tangible thing that they produce each day, the flow of email is viewed by many of them as a way to visibly demonstrate how productive they are. In the process, they're increasingly experiencing a low-grade, chronic state of round-the-clock anxiety.

Another part of what's driving employees back online at night is the fact that the modern workplace actually makes it pretty tough to get stuff done these days. On top of the rise in hours spent in meetings each week, and the distractions of their neighbors in the nearby cubicles (70 percent of offices are now open plan) it can get pretty difficult to find a minute to think and mentally process information for most office- based employees.

Get your people moving, reduce stress

The link between email and exercise might not be an immediately obvious solution, but the GCC shows, year on year, that getting your employees moving has a beneficial effect on their stress levels.

Pre-event survey data from our 2014 event revealed a marked difference between employees taking more than 10,000 steps per day versus those who are inactive. 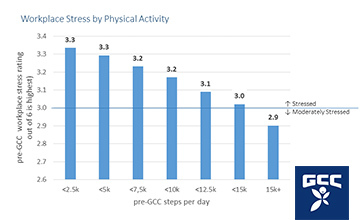 The important thing to keep in mind is that in order to take 13,168 steps per day -- the average for a participant completing the GCC -- an employee has to move for over an hour every day, and moving redirects their attention away from the inbox to the sidewalk and, in fact, the world around them. Getting outside and physically moving in order to take 13,168 steps per day gives employees over an hour each day to solve problems, to reset their minds, to put things in perspective, and to reduce the feelings of stress and anxiety that are on the rise.

In 2015, your workforce will have much of its attention firmly focused on reading and responding to emails, and large swathes of your employees will lose perspective, feel inundated and continue to forget that they need time to reflect and process the vast amounts of information coming at them. The majority of organizations who contemplate GCC are looking for an intervention to improve employees' physical health, but once exposed to the program they recognize its role in reducing stress and anxiety, whether it comes from external factors -- or within that inbox.

Founder and President of the Global Corporate Challenge (GCC)