On being a "who": Words count

A recent essay in the New York Times by Philip Corbett called "Is a Cow a 'Who' or a 'Which?' Our Standards Editor Weighs In" raises some very important questions about the language with which we refer to nonhuman animals (animals). Here, I simply want to make a few comments on Mr. Corbett's essay and raise a few more questions about the words we use to refer to nonhumans. There are far-reaching practical implications and consequences for the animals themselves, and it's an understatement to say that language matters -- words really count for how we view and interact with other animals.

Responding to a query by world renowned philosopher Peter Singer (link is external) about the Times policy, Mr. Corbett writes, "We generally use 'person' pronouns like 'he,' 'she' or 'who' only for animals who have been given a name, or in cases where the sex of the animal is specified. Otherwise, we stick with 'it' and 'that' or 'which.' Here is our stylebook entry on this point, which is in line with The Associated Press's guidelines as well: animals. Call an animal it, not he or she, unless its sex has been mentioned or it has been personalized with a name: The dog was lost; it howled. Marmaduke was lost; he howled. The dog, which was lost, howled. Adelaide, who was lost, howled. The bull tossed his horns."

These guidelines reek of anthropocentric speciesism, as they view human animals as a distinct class of beings who merit a vocabulary different from that which we use for nonhuman beings, a vocabulary that objectifies them as disposable things.

Does an unnamed animal suffer less than a named individual? Rewilding language and rewilding media

Many colleagues and I have argued that we should use "who," not "that," "which" or "it," to refer to other animals regardless of whether we know who they are as individuals. The use of a generic term can rob an animal of their sentience and who they really are. In my book Rewilding Our Hearts: Building Pathways of Compassion and Coexistence I write about the importance of rewilding language and rewilding media. I write:

"So, we need to be careful and self-aware about the words we use to refer to other animals. When I talk about the food people choose to eat, I point out that very often it's a matter of who's for dinner, not what's for dinner, because the animals who wind up on our dinner plates were once alive and sentient. They are not objects, and our words should not objectify them. This small change in words has resulted in a number of people deciding to change to vegetarian or vegan diets. In June 2012, I received a most heartwarming email from a woman in Vienna, Austria, who had heard me speak, and she said, 'you'd turned at least four people to vegetarians -- including myself.'" (p. 105)

Their decision to change their meal plans was based solely on my talking about how it's a matter of who we eat, not what we eat (please also see "Who we eat is a moral question: Vegans have nothing to defend"). And the reason I point this out is that many food animals are formerly sentient beings. I'm not saying that to be cute. I'm not saying it to be antagonistic, however, whenever I use that phrase and I talk to people, it's amazing how it changes their attitude.

I also wrote a story in The Animal Manifesto about a woman I met who worked on word processing software. We were sitting next to one another on a flight, I was editing a manuscript, and must have appeared to be upset. She asked me what I was doing and I told her I was replacing the words "that," "which," and "it" with "who" or "whom" because the auto-correct kept changing "who" or "whom" to "that", "which", or "it," and it was frustrating the hell out of me!

This little piggy went to press

Georgia State University's Carrie Packwood Freeman's excellent essay called "This Little Piggy Went to Press: The American News Media's Construction of Animals in Agriculture" is a must read concerning how we refer to other animals and the significant consequences of our language (please also see "Animals in the Media: Guidelines for Accurate Representation" and Freeman, C.P., Bekoff, M., & Bexell, S.M. (2011) Giving Voice to the "Voiceless:" Incorporating Nonhuman Animal Perspectives as Journalistic Sources. Journalism Studies 11:1-18).

There also is a comprehensive website called "Animals and Media: A Style Guide For Giving Voice to the Voiceless" where you'll find guidelines for how animals are represented in journalism, advertising, public relations, and entertainment, and also tips for the general public and extremely valuable resources including Online Resources and a Glossary of Animal-Related Terms. The style guidelines were created for media practitioners in the professions of journalism, entertainment media, advertising, and public relations to offer concrete guidance for how to cover and represent nonhuman animals in a fair, honest, and respectful manner in accordance with professional ethical principles.

Giving voice to the "voiceless": Much is gained and nothing is lost by referring to other animals as "who" 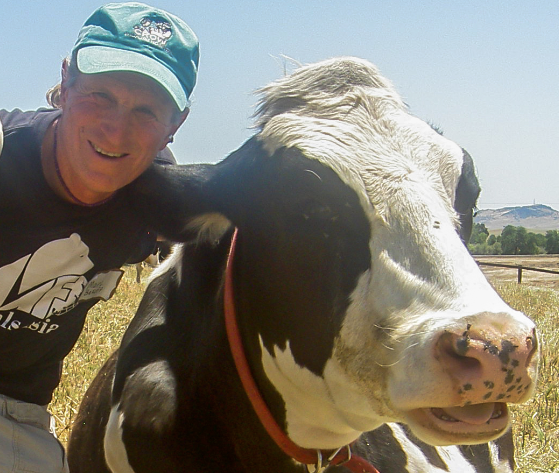 So, does an unnamed cow or other animal suffer less than a named individual? Are they less sentient? Of course not. My friend Bessie (shown here) is no more sentient and doesn't suffer more than an unnamed cow on a factory farm or anywhere else. Personalized animals are no more sentient than unpersonalized individuals. It would be singularly absurd for anyone to make this claim.

Let's refer to all animals as "who", and really, nothing at all is lost. Research on the cognitive and emotional worlds of animals is coming up with many different "surprises" and, for example, animals such as fishes have been shown to be sentient beings and there is compelling evidence that some invertebrates feel pain. There's no reason to closee the door on the taxonomic distribution of sentience among diverse animals (please also see "A Universal Declaration on Animal Sentience: No Pretending" and the new journal called Animal Sentience: An Interdisciplinary Journal on Animal Feeling).

Clearly, there are significant consequences concerning the language we use to refer to other animal beings, so let's give them all the benefit of the doubt. Individual animals are "someone" not "something." And, there really is no reason that sentience alone has to be the marker for how we choose the words we use.

Note 1: For more on some of these issues and the need for linguistic reform, please see Peter Singer's excellent essay called "The Cow Who..." and The Someone Project: Farm Animal Behavior, Emotion, and Intelligence.

Note 2: Bertenshaw and Rowlinson (2009) report that on farms where the stock manager knew every animal as an individual and gave each cow a name, milk yield was 258 liters higher than on farms where cows were not individualized. (Bertenshaw, Catherine and Peter Rowlinson. 2009. Exploring stock managers' perceptions of the human-animal relationship on dairy farms and an association with milk production. Anthrozoos 22, 59-69).