Alas, it is a fact that no one does anything for anybody (or for any reason) unless there is a personal payoff. Now to many this may sound callous and cold -- is it really? Let's explore this fascinating phenomenon of human nature.

Altruism is a lofty aspiration. The do-gooders of the world are widely revered for their pureness of heart, selflessness and generosity. Could it be that they have an ulterior motive? Even if their reward is simply to feel good about themselves?

Closely related to the role of benefactor/contributor is the generosity factor, particularly when it comes to parting with one's shekels.... Might it be possible, in some instances, that giving money alleviates guilt over having overabundance?

Have you considered the observation that what raises the well-being of one, no matter how modestly, benefits every being on the planet? That in truth we are giving to ourselves and that's what's in it for us?

Speaking of money, I stumbled on an astounding discovery! 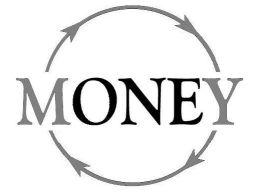 It will be noted that the letters M and Y nicely frame the word "one." A circle is formed by semi-circles connecting the M and Y above and below.

From this arrangement/diagram it can be seen that the possessive pronoun "my" enfolds the word "one." It then can be deduced that the reality of money encompasses and combines one's identity with ownership as a single entity -- money!

The circle signifies that circulation flowing as currency is the appropriate and correct link between our financial wealth and health! The flight of arrows as they spin in motion assures and indicates eternal continuity and protection.

Here's something else hiding in plain sight:

Gold has always been represented, even worshiped, as a symbol of god and love. Consider the mandatory gift of gold at weddings in eastern cultures. Or its use as the holy metal of choice for marriage bands.

It is an ancient and universal symbol of devotion recognized by all belief systems.

The spelling holds the truth of the idea:

Back to the concept of stashing cash (or anything else of worth) unless the donation reaps a greater benefit to the donor. Most mothers and grandmothers derive great satisfaction from knowing their descendants will continue to flash the family bling after they themselves have no further need of adornment. Unless of course they were early Egyptians who took them along, in case.

Somehow, some blogs demand to be written in the dark of night. The inspiration for this one arrived after a lengthy dry patch, during which my mind felt parched as the Sahara with no oasis in sight. Although I knew it to be an exercise in futility, anxiety ruled relentlessly.

Around 3 a.m. this morning I took a hot bath with Epson salts, reasoning that a relaxed body was a soak in the right direction. My body ached along with my brain. As my muscles softened, my thoughts firmed up. First came the title; then I mentally doodled the MONEY emblem -- BINGO! Instantly I was momentarily filled with a soft golden glow of gratitude.

Since we share this life, whatever is given is automatically deposited in everyone's reservoir of riches. Human nature, rooted in fear as it is, remains ever doubtful and must always lovingly be re-aligned with truth.