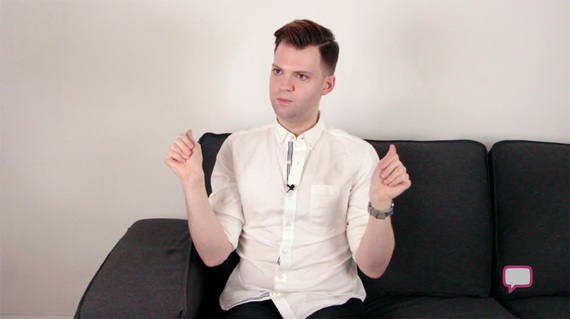 What's it like to navigate the gay world when you're deaf? Richard Mesich shares his story, beginning with his coming-out experience. Richard recalls talking to his mom on AOL Instant Messenger:

We were talking, and my mom asked me, "Are you gay? Are you interested in boys?" I was thinking and realized it is time for me to open up, so I told my mom, "Yes, I am gay." She said, "OK, that's good. I am happy to hear that from you. I knew you were gay since you were a little kid."

When Richard turned 21, his gay uncles took him to his first gay club in West Hollywood. While the experience was a little uncomfortable, it introduced him to the dating world:

I dated a few guys on and off. It was good and enjoyable. But I was very nervous dating a guy for the first time. I met this one person, and he was hearing. We went out for dinner, and we could communicate a little, but sometimes it's hard with a hearing person. Mostly I would text on my phone to communicate.

Now, years later, Richard is able to reflect on how comfortable he's become as an out gay, deaf man:

Comparing high school to where I am now, I used to feel lost and isolated. I didn't know who I was. Now I feel confident, happy and know who I am. I'm comfortable with hearing and deaf people; it doesn't matter to me. Now I know who I am, but I am not in a rush to look for love.