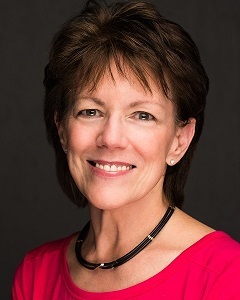 In almost eight years of hosting my talk show I've never had people get as excited about a guest as they did when it was Susan Bennett from Atlanta. You probably know her as Siri, the voice in your iPhone. We caught up with her last fall, and she couldn't have been more gracious.

A lot of people feel like they know you. Is that weird for you?

I've been in the voiceover business a long time and I've never particularly sought out or even wanted fame, so it's a very strange thing to be famous accidentally.

It feels weird to even call you Susan. I keep wanting to call you Siri. I understand "Siri" is a Norwegian name that means "beautiful, victorious counselor." Have you heard that?


Yes. A beautiful woman who helps you on your way. But I like to say the real Siri is just a feisty chick who tells you where to go.

If I understand the history correctly it was a Norwegian engineer who created the app.

Correct -- Dag Kittlaus, along with two other engineers, Tom Gruber and Adam Cheyer.

Is it true you don't really know how you got the gig?

Exactly. All of the digital recordings started happening seriously, I guess, at the beginning of the millennium, and I did the basic vocabulary that turned into Siri in the year 2005. I recorded for the whole month of July -- four hours a day, five days a week. At the time I was working for a company that did a lot of on-hold messaging, which I've always done and continue to do. This was sort of a new thing. It was interesting. They were recording phrases and sentences that were sort of odd because they were solely created to get every sound combination in the language. I knew it was going on phone systems, but I had no idea it would be going on millions and millions of devices.

Do you remember how you found out you were going to be Siri?

I do. Siri was introduced on October 4, 2011, and a fellow voice actor wrote to me and said, "Hey, we're playing around with this new iPhone. Isn't this you?" And I thought, "What?" And I went onto the Apple site and listened and I thought, "Oh, my word. That is me." I was kind of horrified, because I hadn't been told. It was a huge surprise. On the other hand, I was extremely flattered. Our house is nothing but Apple products.

I assume you got everything worked out from a legal standpoint.

One thing people are curious about is how old you are.

I'm older than people think. It's basically public knowledge but I don't like to talk about it. I like to say I'm 104 but I look really good for my age.

A lot of people found it amusing to ask Siri what zero divided by zero is. Any other funny bits that you know of?

You'd have to ask the programmers. I merely provided my voice.

Do people recognize you by your voice when you're out and about?

It's happened one time, and it was only a few weeks before this interview. I was talking with a banker and he said, "Boy, your voice sounds really familiar." I told him he was the one and only person who's ever recognized it. My typical speaking voice is a bit higher than what you're used to hearing from Siri. It's also a matter of context. People don't expect to hear it from a person, only their phones.

In fact one little kid came to the door at Halloween and said, "Hey, the neighbor said you're Siri!" And I said, "Yes, I am." And he said, "You don't sound like Siri." And I said [lowers her voice to sound more like Siri], "How about now?"

Do you ask Siri questions yourself? 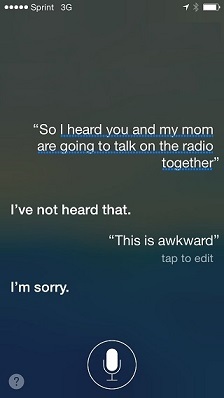 Not really. I've asked her a few things, but after one of the first questions she kind of dissed me so I left her alone after that.

Do you remember what you asked?

I said, "Hi, Siri. What are you doing?" And she said, very disgustedly [lowers her voice to sound more like Siri again], "I'm talking to you." And I thought, "Okay. Sorry to bother you."

So, no. I don't talk to Siri. It's too weird. I'm used to hearing my voice on radio and TV commercials and that sort of thing, but to hear my own voice coming out of this little computer phone is too strange.

How has being the voice of Siri changed you?

It was really a life lesson for me. I am not a particularly extroverted person, and to suddenly become famous -- suddenly and accidentally famous -- has been a bit of an adjustment. I've been fortunate to have heard from mostly very positive people, but it's been difficult to get used to. I've had some incredible opportunities because of it, though.

They wanted me to fly to New York and I had just come home from New York and I was getting ready to go to Los Angeles. So I suggested recording from my home booth, and I did. David Letterman made a big deal about it on the show. He was rather confused. He thought he was reading the list because I wasn't there in person, and he made it like I couldn't be bothered to come on the show. It was pretty funny.

What's been the most fun media appearance?

I loved Queen Latifah's show. It was fun, and she's a wonderful person.

Is there anything we didn't cover that you think is important?

Well, I think a lot of people are still amazed that there's a person behind the voice. I guess they just figure that all voices and sounds are machine-generated now, but that's not quite true yet -- though we're certainly headed that way.

What would you most like us to remember about Siri?

Siri's great, but she's not human. Don't forget to talk to your favorite humans as well as Siri!

It's like a friend of ours said, that we have the entirety of the world's knowledge in the palms of our hands -- and we use it to watch kitten videos.

It's strange because really young people don't know any other way. They don't realize how much trouble it used to be to find things out. You had to go to the library.

You can learn more about Susan Bennett at SusanCBennett.com.