A friend asked me what it's like to be on the radio a few days ago, and my short answer was, "It's fun." It's more complicated than this, of course, so I thought I might use a few pixels here to explain what it's like to speak into a microphone and to know that hundreds of thousands of people are listening to you.

There are two basic ways your voice is sent shooting through the atmosphere for a radio interview: 1) You call in on a phone, or, 2) You step into a studio. My first radio gig happened in 2005 when I appeared on Minnesota Public Radio. We were talking about Tim O'Brien's masterful novel, The Things They Carried, and since I've read that book I-don't-know-how-many-times, I wasn't worried about the questions. I sat in my office with my door closed and held the phone to my ear with both hands. I knew I was going to be patched in at any second. When it happened, I heard my name, then a question.

A few words tumbled out of my mouth but when I thought about how many people were out there listening to me, my throat tightened. I thought of cars driving on long ribbons of highway, of farmers peeling back rich layers of earth with their tractors, of parents eating at a table -- and they all waited for me to speak. I panicked at the thought of them leaning in, waiting for my tongue to work.

With closed eyes, I told myself to get it together.

I have no idea what I finally said, but it must have been decent enough because I stayed on air for another 30 minutes. And with each passing second, I felt more at ease.

Since then, I've appeared on the radio about 30 times. I like it. It's fun. Doing a radio interview from your office feels like a normal conversation, and it's easy to forget that people are eavesdropping on what you and the host are saying. A good interviewer will make you feel like you're talking over a tall cup of coffee.

Then there's the other type of interview: The one that takes place in a studio. I actually prefer this one because you've got a fancy set of headphones on and the microphone is hanging before you like a weird metal fruit. I have to remind myself not to uncross my legs or shuffle paper because the mic picks up everything. Plus you've got all of these dials and blinking lights in front of you.

Best of all though, you're sitting across from the host and you're able to read her or his face. You pick up expressions you'd miss on the phone and the conversation is completely natural. It's also helpful to have a large atomic clock next to you -- it counts down how many seconds you've got left on the program. Have you ever wondered how radio guests often seem to talk for just the right length of time? Well, there's your answer. All you have to do is glance at the wall and you see that you've got 40 seconds left... 39... 38... 37...

I enjoy doing radio, and whenever I'm contacted about being on a show I almost always say "yes." It's an honor to be piped into cars and homes and work spaces. You become a guest among strangers. And, as these strangers listen, I hope they might nod their heads at something I've said.

The truly weird part about doing radio though? I mean, the truly mind-blowing part of it all? It's the realization that nothing else I've ever done (or will ever do in the future) will last longer. This isn't arrogance on my part; it's physics. At this very moment, all of the interviews I've done are speeding across our little solar system and at some point in time they will cross the distant edge of the sun's gravity. My voice will pulse out into the void and keep on going. Like a message in a bottle, my voice is corked inside radio waves, which will keep riding through space long after I'm gone. A hundred thousand years from now all you need to do is tune in and I'll still be there, whispering in the dark. 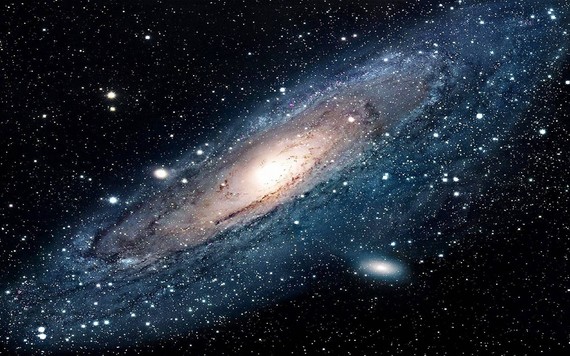