On Friday theaters across the country will start showing The Last Mountain, a powerful documentary about the ravages of mountaintop removal coal mining in West Virginia. The film focuses on community members who are fighting to save their beloved Coal River Mountain from falling prey to America's appetite for dirty energy.

What I found so moving was the way the movie portrays what it's like for people who live in the shadow of companies that devour mountains. This kind of mining doesn't just wreck the environment; it damages people's lives, their homes, their schools, and their communities.

In the film, Bo Webb talks about returning to his hometown to enjoy quiet country living only to be greeted by daily rounds of detonations. Imagine the explosive power it takes to blow the top of a mountain; now imagine hearing that above your home. Webb describes the boulders and rain of dust that fall down the mountainsides into people's property.

Maria Gunnoe remembers the afternoon when four inches of rain fell on her town, and because the mountaintops had been scraped down to rock, there was no soil or trees to capture and slow the water. It funneled right into her hollow with such ferocity she thought her family would drown. They survived, but homes throughout the community were inundated with flood waters. 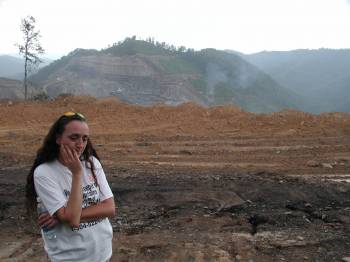 Maria Gunnoe at a mine site.

NRDC Senior Attorney Bobby Kennedy Jr. appears in the film, saying that the amount of explosives used mountaintop removal mines is equal to dropping one Hiroshima bomb every week. "You feel like you are under attack," he says. You can see Kennedy talk about the film on Wednesday night's Colbert Report here.

Nearly every person featured in The Last Mountain comes from a family filled with generations of coal miners, yet after witnessing the damage done by mountaintop removal, they firmly believe that we must find a better way to mine and produce electricity.

Maria Gunnoe says, "I know we live in a very intelligent country that has the ability to create energy without blowing up mountains."

Gunnoe is right of course. Americans have already proven that we don't need dirty fossil fuels to power our economy. We see it all over the nation: Iowa is getting nearly 20 percent of its power from wind, energy efficiency programs have been be so effective that the average California resident uses 40 percent less electricity than other Americans, and cars have been engineered to get 60 miles per gallon of gas.

If the solutions exist, why do communities like those in the Coal River Valley continue to suffer? Because fossil fuel companies have undue influence over our political process. They have blocked the way to the cleaner future we know is around the corner. The oil and gas industry alone spent more than $145 million on Washington lobbying in 2010, according to the Center for Responsive Politics.

These are potent forces, but the film reveals that ordinary people can make a difference. "The greatest reform of the coal mining industry is being pushed by citizen activists," says NRDC Senior Scientist Allen Hershkowitz in the movie. "The fight over Coal River Mountain is a fight over democracy."

This fight is gathering strength. On Monday, five hundred people from across Appalachia will begin a 5-day reenactment of the historic March to Blair Mountain of 1921, when almost 15,000 coal miners confronted an army of police bent on blocking unions in coal country. Organized by the March on Blair Mountain Coalition, the marchers are calling for an end to mountain removal mining, stronger labor rights, and investment in sustainable job creation for Appalachian communities. Over the weekend, NRDC's Music Saves Mountains campaign will host a concert to kick off the march in Charleston, West Virginia, headlined by Grammy winner Tim O'Brien.

You can support these and other efforts to stop the destruction of America's Appalachian heritage by bringing a friend to see The Last Mountain when it comes to your area. Visit the film's website to find out where it's playing or bring it to your community. And then take action. Click here to ask the president to end mountaintop removal mining for good.