What would it be like to have two souls? Just imagine, if you will, living with a dominant soul and a recessive soul. The recessive soul is, in a sense, a sibling and a best friend but you can't see them. You each have your own thoughts and personality. But by a certain age your second soul should have disappeared, and all that would remain is you. But that other soul still lingers, refusing to fade away. Terrified anyone will find out because it's illegal for the recessive soul to exist, you keep this a secret. If anyone were to discover your secret you both would be in grave danger.

Here lies the concept of What's Left of Me by Kat Zhang. Pitched as The Golden Compass meets Girl, Interrupted, the novel brings insight into the meaning of being human and immortality. Over the last year, the debut novel, in the Hybrid Chronicles trilogy, has received a lot buzz among blogs and in the book world. Does it live up to the hype? Absolutely! If you're a fan of futuristic stories set in dystopian worlds like The Host, Never Let Me Go, and the Uglies series, then you will get a kick out of this terrifically inventive novel. 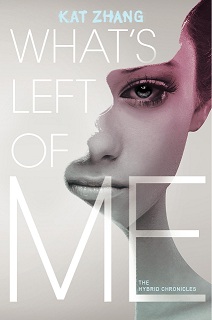 What inspired Zhang to write What's Left of Me? She says:

"I always wish I have a super cool story to tell when people ask me this! But really, the idea for What's Left of Me just came from me wondering: "What if that little voice in the back of your head was a real, separate person?" Everyone's got an internal monologue going on, making snarky comments about your day, telling you that you really ought to have done this, instead of that, etc."

When I first started the novel, I was struck by the originality of how Zhang crafted Eva and Addie, the main characters in the novel, into two equally separate characters. Addie is described visually and interacts with other characters. Eva's character is enhanced through dialogue framed in arrow brackets and italics. I've never seen this technique before in a novel. While reading, I became one hundred percent convinced there were two different characters in one body. Did Zhang have any challenges when creating two voices that inhabit one body? She explains:

"When I first started drafting What's Left of Me, I only had vague ideas about what sort of personalities Eva and Addie had. They both came into being over the course of the first few drafts, though on the whole, that process was pretty natural and painless. Creating characters is one of my favorite parts of writing (and characters are often my favorite part of reading, as well!)."

She goes on to explain:

"Pinning down Addie's character was actually harder for me. Since the book is from Eva's POV, we get a lot of insight into how Eva thinks, and of course everything is filtered through her. I ended up writing a few diary-entry-like pieces from Addie's POV to really see things from her perspective. "

As for the characters, Addie is the dominant soul and has the upper hand. She's free to do what she wants, go to school, talk to other people, have choices and options, and is acknowledged by family and her peers. But she also doesn't know who she'd be without Eva, who questions everything about herself and the world around her. Eva wants desperately to be her own person and will do whatever it takes to obtain that. Zhang says:

"By the beginning of the novel, Eva has been trapped in her body for about three years. More than anything, she just wants a chance for life, freedom, and control. She's simultaneously a little naive and world-weary. Addie is more cautious, more cynical, but at the same time, she can be even more vulnerable than Eva."

When Eva and Addie discover a controversial and secretive method to release Eva, their secret isn't kept for long. Their parents and the government, that wants to suppress recessive souls from existing, ship the girls off to a mysterious hospital. Dystopian novels, like What's Left of Me, make readers think one step ahead and challenge views on totalitarian governments and abolition. This is one reason why dystopian novels are so popular today.

While at the hospital, the girls meet other young people just like them. The hospital is creepy with horror-movie-type doctors and nurses who perform evasive and deadly experiments. The stakes are raised at this point. But for me, the hospital and what was occurring at it, was interesting, but the story began to drag a bit. Fortunately, when Eva and Addie, along with some fellow patients, decide to break out of their surroundings the story picks back up. I raced to the end to see how the story would be left. What does Zhang want readers to take away with them after reading, What's Left of Me?

"I've been really happy to hear that What's Left of Me has inspired people to think about some things in a new light. Personally, I love it when a piece of art challenges me to see things like I've never seen them before, or raises questions I'd never considered previously. " 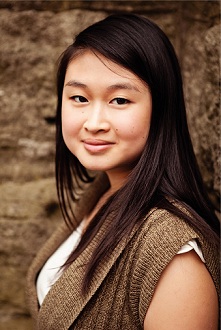 An English major at Vanderbilt University, Zhang sold the Hybrid Chronicles trilogy, at age 19. Growing up, stories were always a part of her life. She writes just about anywhere on campus. In her spare time, she enjoys running and hanging out with friends. She also does Spoken Word poetry in school and calls herself a professional dabbler. Since the release of her novel, she's taking everything in stride, but maintains a lovely grace and a deep gratitude toward her fans.

"I've been so happy to hear from everyone who has read and enjoyed What's Left of Me, and those who haven't read it yet but are excited for it! I honestly wasn't introduced to the book blogging world until two or three years ago, and I've really just been overwhelmed and overjoyed by the passion with which [book bloggers] approach reading and books in general. A huge thank you to everyone who has helped What's Left of Me along since it was first announced!"

What's Left of Me will be released September 18. Pick up a copy and enjoy!