Academy Award nominee Peter Bogdanovich has earned a reputation as one of America's great film directors with works like The Last Picture Show and Paper Moon to his credit. He has also written several books on the medium of film including This is Orson Welles with whom he had a close, personal relationship. And he has been seem in numerous films and TV shows, including his recent turn as Dr. Elliot Kupferberg on The Sopranos. Bogdanovich is most easily identified, though, by his signature neck scarf which has become his logo: 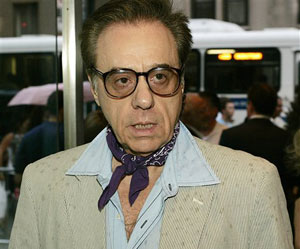 You have developed a very distinct signature style of wearing ascots. How did that start?

They are not ascots. An ascot is usually silk and an English thing. I'm just wearing a bandanna; it's not so fancy. Most of the time they are cotton and different sizes. It started when I was shooting The Last Picture Show in Texas, and I liked wearing it because it made me feel secure. I don't know why. But it feels cozy, and I kept wearing it.

Do you wear one when you are not working or making a professional appearance?

Yeah, I wear them all the time. When I make a professional appearance, I sometimes wear a tie so as not to be too unusual.

Do you think the bandanna is quite unusual?

People seem to have caught on and it seems to be a big deal.

How do you tie it?

Do you think personal style is a professional asset?

Yes, until it gets mannered. I may have to stop doing this because it may get too mannered. But I prefer it to a tie.

So why don't you stop?

It feels comfortable - I'd feel bereft if I got rid of it. The New Yorker ran a piece about me and they had a shot of me tying the bandanna and I though, "Christ, it's getting to be a bit much." But, you know....

But you do recognize that it has become part of your brand identity.

There is something else I do all the time that nobody seems to have noticed, something I picked up from Audrey Hepburn. When I did a picture with Audrey in 1980 called They All Laughed, I noticed that she never buttoned the buttons on her sleeves, and I asked her about it and she said, "It's more comfortable this way!" And I tried that and it is more comfortable. I was never thinking about a product or brand; I just started dressing this way because I like it.

Has anyone ever said anything negative about your bandanna?

I think some people are annoyed because they think it's an affectation. My friend Jerry Lewis hates it; he says it reminds him of a director from the 30s. But I ignore him, and he forgives me.

What do you owe stylistically - if anything - to Orson Welles, with whom you were friends?

There was a time when I smoked cigars. I was complaining about cigarettes and he said, "Smoke cigars! You don't have to inhale," but I stopped for health reasons because you do inhale no matter what. I do like the taste of Cuban cigars though.

Who else has influenced your style?

Howard Hawks and John Ford, in terms of making films with a certain simplicity of style, which hopefully is not noticeable. I like direction that is invisible.

Did you model yourself after those directors?

I didn't really, because they are very different from me. John Ford was very gruff and often mean-spirited and tough on people. And Hawks was very cool. I'd like to be like Hawks, but I never managed to be that cool. I've always admired the cool in people but I don't think I've ever achieved it. It's something born in you, not something you do. I'm much too Slavic to be cool.

Do other directors allow you to wear your bandanna when they cast you as an actor in films or on TV?

I purposely try not to do that when I play a part: on The Sopranos, I wore a tie. When I did a recurring character on Law & Order, a girly magazine publisher, I wore a bandanna, but it was silk. And I definitely wasn't trying to be like me. If anything I was doing a little bit of Dean Martin.

Who are your style icons?

Cary Grant; and I knew him too. The first time I went into his office he said, "Is that a Brooks Brothers jacket?" I said, "Yes." And he said, "Right off the rack, right? They're great."

What are your other unique signature style traits?

I write with a black fountain pen on legal yellow pads and then someone types it for me. I stopped using a typewriter in the early '70s. I was writing a column for Esquire, and I had little time to write it except on the plane, and you can't carry a typewriter on a plane, so I just started writing long-hand. And I never stopped; I don't type or use a computer. My assistant has email and she does it for me.

You had a recurring role on The Sopranos. So what do you think happens at the end?

It ends the way it began: with anxiety and fear and fearfulness and dread.

Ok, but do you think Tony dies?

I don't think he died right then. He will eventually. We all do.

Do you have any advice for other professionals creating a logo?

Wear what feels comfortable and feels good on you. I wore a bandanna on every picture since The Last Picture Show, but I didn't wear it in everyday life. Then I thought, "Why shouldn't I? I should do it all the time." It could still be a distant echo of wanting to be a cowboy.